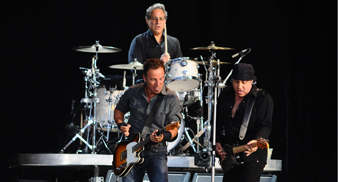 It was the band’s second tribute to late musician and Springsteen’s hero Joe Strummer this weekend. They opened their Glastonbury headline set with the Mescaleros song “Coma Girl” the night before (June 27).

The Clash’s Mick Jones and Bon Jovi’s Richie Sambora watched the E Street Band from the side of the stage, while artists including Pink Floyd’s Nick Mason were in the crowd.

As at Glastonbury, Springsteen was joined on vocals for “No Surrender” by The Gaslight Anthem‘s Brian Fallon after the Boss also made a surprise appearance again during the fellow New Jersey group’s gig earlier in the afternoon.

The mammoth three and bit hour set at times saw Springsteen lying on the stage to grab his breath, with Bruce joking after a run down into the crowd and back that someone “better get me an elevator, I’m fuckin’ 60!”

Highlights of the set included a not-oft performed “Racing In The Street” and surperb versions of “Jungleland” and “Outlaw Pete.”