U2 performed a special concert in New York’s Times Square last night, with Bruce Springsteen and Chris Martin filling in for frontman Bono, who is recovering from a cycling accident. 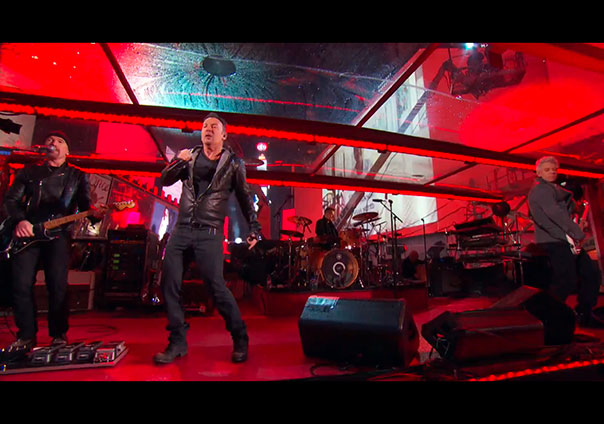 U2 performed a special concert in New York’s Times Square last night, with Bruce Springsteen and Chris Martin filling in for frontman Bono, who is recovering from a cycling accident.

The singers were drafted in to prevent the World Aids Day event from being cancelled in Bono’s absence – watch the full performance below.

Martin – wearing a T-shirt that read ‘SUBSITUTU2’ – joined the band to perform ‘Beautiful Day’ and ‘With Or Without You’, telling the crowd: “Dreams come true for young and old people alike.”

Springsteen joined the band on the specially constructed stage to play ‘Where The Streets Have No Name’ and ‘I Still Haven’t Found What I’m Looking For’. He dedicated the latter to “Bono in Ireland – be well, my friend.”

The event was introduced by a speech from former US president Bill Clinton, who said: “I got this email from Bono, recuperating in Dublin, and he said I had to come here tonight to do the intro. And here’s what I want to say to you: 26 years ago we could never have had an event like this on World Aids Day because to be diagnosed with Aids was a death sentence… this year, for the first time ever, more people were put on life-saving medicine than were diagnosed with Aids. We can win this fight.”

Also appearing at the event was Kanye West, who performed a medley of ‘Jesus Walks’, ‘Black Skinhead’ and ‘Touch The Sky’ in lashing rain, and country singer Carrie Underwood.

The event was staged by Bono’s charity Red. Earlier this year, U2 gave away their song ‘Invisible’ in a deal that saw Bank Of America donate $1 (60p) per download of the track to the Global Fund To Fight Aids, Tuberculosis And Malaria.