Band wave their flags at Latitude 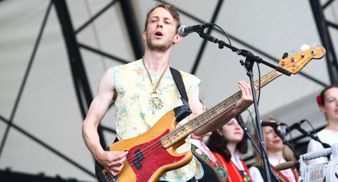 British Sea Power played their afternoon set on the Obelisk stage at Latitude today (July 18) with members of the London Bulgarian Choir.

The opened their set with the last song from their latest album Do You Like Rock Music? using it as an intro to “All In It”, which is the first song from the record.

The stage was dressed with their trademark silk flags and tree branches and the crowd waved homemade banners, one of which bore the slogan “The Rise Of British Sea Power” prompting guitarist Martin Noble to give it a 9/10.

Yan, real name Scott Wilkinson, and his twin brother Hamilton, Neil Wilkinson, swapped instruments throughout the set and were also joined by violin and bugle and the choir for an a cappella performance of traditional Bulgarian folk music for “Waving Flags”.

The band were accompanied by four hand-operated air raid sirens during the set, and came together for the finale of “No Lucifer”.

Stay up to date with all that’s occurring at this year’s Latitude Festival – with uncut.co.uk‘s round-the-clock coverage throughout the next three days.

Stay tuned to UNCUT’s dedicated LATITUDE Blog by clicking here or through our homepage uncut.co.uk.