The ‘Godfather of Acid Jazz’ is back on the Oblivion Express 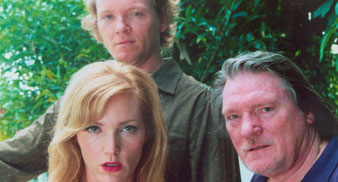 Auger is credited with being the first jazz rock fusion artist who made it big in the jazz and rock worlds with his three distinctive bands – Steampacket (1966, featuring Rod Stewart), The Trinity (1967-1970) and The Oblivion Express (1970 to present).

Auger’s newly revived Oblivion Express features his daughter Savannah on vocals and his son Karma on drums (pictured above).

The three intimate shows are part of a European tour to coincide with a re-issue campaign for eight albums in Auger’s decade-spanning career.

Albums recently digitally re-mastered include “Search Party”, “Here and Now”, “Keys To The Heart” and “Voices Of Other Times”.
All have new liner notes, rare photographs, and the latter two also feature previously unreleased bonus tracks.

The critically acclaimed 1975 Oblivion Express album “Reinforcements” has also recently been re-mastered after many years out of print in the UK.

Auger’s stated intention had always been to overlay soul and funk
rhythms with jazz harmonies and solos – to see for yourself – catch Auger at the following venues early next week: