Steve Berkowitz, producer of the latest in Bob's Bootleg Series, reveals all to Uncut 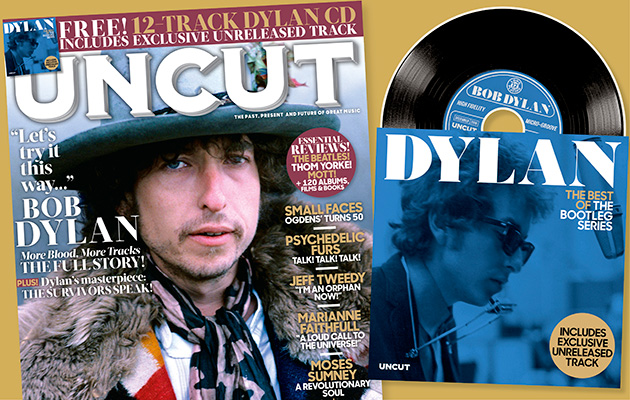 “We started to do tape research on More Blood, More Tracks a number of years ago, probably in 2015,” says producer Steve Berkowitz in the latest issue of Uncut, in shops now or available online here. “The tapes were in excellent shape. The multi-tracks, for the most part, had not been touched since the original mix in 1974.

“Blood On The Tracks was originally recorded on 16-track, 2in analogue tape. From the very first track on the first day, ‘If You See Her, Say Hello’, there was a safety-room mic set up, two mics on the guitar and a vocal mic. There are 11 or 12 takes with just Bob, then after ‘Lily, Rosemary And The Jack Of Hearts’ there’s a break and the next thing, a band are brought in. Then there are another 20 takes. To record 32 takes in one day, that’s some stamina. Then the next couple of days, it’s back to him and [bass player] Tony Brown with some keyboards from Paul Griffin. What’s remarkable is Mr Dylan’s focus in the studio. It seems as if Bob Dylan is never not ‘on’: every take is serious. His ability to focus and be in that moment is incredible to hear.

“It was common recording practice that in parallel to the multi-track tape, they would have a mono quarter-inch tape running all the time. We went through all the multi-tracks and the quarter inches and realised there were additional versions and takes that were not on the multi-tracks — they only now lived on these mono reels. They’re in mono, and that’s why they have the heavy reverb because that’s the way Phil Ramone tracked them.

“If you listen closely to ‘Tangled Up In Blue’ (Rehearsal And Take 1, Remake 2)’, you’ll hear lots of, ‘Button!’ Sounds like Mr Dylan was wearing a shirt with long sleeves and had it unbuttoned, and it creates a percussive sound – the button clicking on the wood of the guitar. Since it is mostly voice and guitar, you hear the button on the up-strum of what he’s playing. It’s just real — true — well recorded!

“Mr Dylan named the box More Blood, More Tracks. In presenting these recordings again for this box, [Dylan’s manager] Jeff Rosen and I wanted to focus on Dylan’s voice and the songs and make it more intimate – like you’re in the room rather than a full album production. With the big box, you’re able to go backstage on the original recordings. It’s living history; it’s a thrill to be a part of it.”