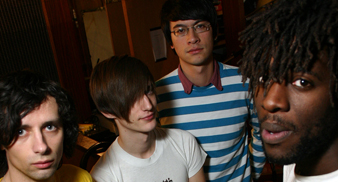 Kele Okereke has retorted back to Oasis’ Liam Gallagher’s jibes that Bloc Party look like a ‘University Challenge team’ by labelling them ‘stupid Luddites.’

In an interview with Ben Marshall in this month’s Uncut magazine, Okereke says: “Why is it bad to look like you might have been to university? why is it bad to better yourself? It’s all about the weird way in which this country chooses to view the working clases. It really is daft to reinforce the idea that there is something cool about being dumb.

When asked if Oasis deserved to win the BRIT Award for ‘Outstanding Contribution To Music,’ Okereke replies:
“Absolutely not. I think Oasis are the most overrated and pernicious band of all time. They have had a totally negative and dangerous impact upon the state of British music. They have made stupidity hip. They claim to be inspired by The Beatles but – and this so saddens me – they have failed to grasp that The Beatles were about constant change and evolution. Oasis are repetitive luddites.”

Read the full Ben Marshall meets Kele Okereke interview in the May issue of Uncut, on sale now.