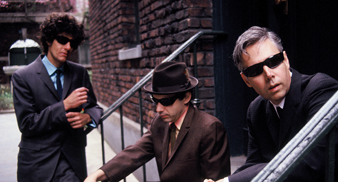 Beastie Boys‘ Mike D has confirmed that the band will released their new album, ‘Hot Sauce Committee Pt 2’, this spring.

The news follows bandmate Adam Yauch‘s all-clear from cancer, after he was diagnosed with the illness in July 2009.

Speaking to BBC Radio 1, Mike D said the trio were “really happy” about Yauch‘s condition, before confirming the band’s new album plans. He told BBC Radio 1 that ‘Pt 1’ of ‘Hot Sauce Committee’ was “still delayed”, but added of its counterpart: “The second one is coming out as originally scheduled.”

He went on to say that the band are “open” to touring the new album, although he added: “We’re still going to have to see how he’s [Yauch] doing.”

Mike D also confirmed that the band are working on a new video together. “We’ve got a video we got to finish, a big video,” he said. “I know people don’t make big videos any more but we made a big video. It’s not even a video, it’s a film-eo. A cinematic, short film.”