'Pretty Sue' is new track from Pete Doherty and band 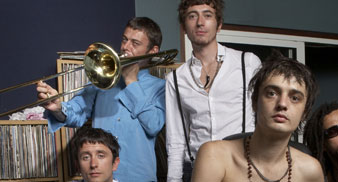 The new song, ‘Pretty Sue’, in still in it’s early demo stage, and is said to have been recorded by Babyshambles whilst on their recent arena tour.

You can hear the track at drummer Ficek’s page Roses, Kings, Castles: Babyshambles.

A bulletin on the site also explains that Babyshambles will soon be posting two further new tracks on the page, one called ‘1939’ and another called ‘Mouse In The House’.

Ficek has also said that the band are planning to play “some small shows for Xmas” – which could see the band playing more of their famed secret pub gigs.