Exclusive 7" being given away with Uncut's sister title 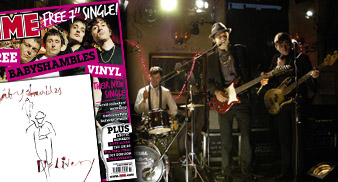 The new Babyshambles single ‘Delivery’ is being given away exlcusively with the NME this week, ahead of it’s official release on Monday (September 17).

The exclusive acoustic version of the song was recorded during Babyshambles’ renowned Stookie + Jim – Bumfest Demo sessions. The B-side features an exclusive audio interview with the band talking about the song.

“It’s good to give NME readers the chance to hear ‘Delivery’ as a raw, stripped-down demo,” declared drummer Adam Ficek of the unique release, “and also give an insight into how the song grew, developed and finally emerged into the actual finished album version.”

The single is the first glimpse of Babyshambles’ new album ‘Shotter’s Nation‘.