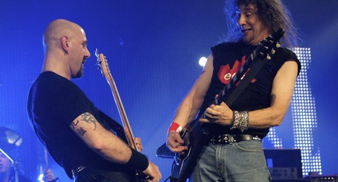 Anvil, the heavy metal trio from Canada, have been inducted into the Canadian Music Hall of Fame 36 years after first forming.

Accepting their plaque at the 9th annual Indie Music Awards, which took place this year, at Canada Music Week in Toronto on Saturday (March 14), Steve “Lips” Kudlow, Robb Reiner and Glenn Five thanked their fans and in attendence family for the ongoing belief and support over the years.

Anvil, who finally found fame after a Sacha Gervasi’s film The Story of Anvil was a surprise hit around the world, found time to talk to Uncut backstage at the Indie Awards to talk about the new album.

Coming out around September, the new album, their 14th studio album will be called ‘Juggernaut of Justice’, the title of which “pretty much sums up” how they feel about finally being heard outside of their home country.

Recording the album around movie promotional tours and shows, Glenn Five says “we’ve never stopped writing material, and we knew we had to come up with a great album after all this fanfare.”

As well as being inducted into Canada’s Hall of Fame, the band also had some other good news at Canada Music Week; they just found out they’ve been booked to play this Summer’s Glastonbury Festival.

“Unbelievable,” says Reiner, “this is the stuff dreams are made of.”