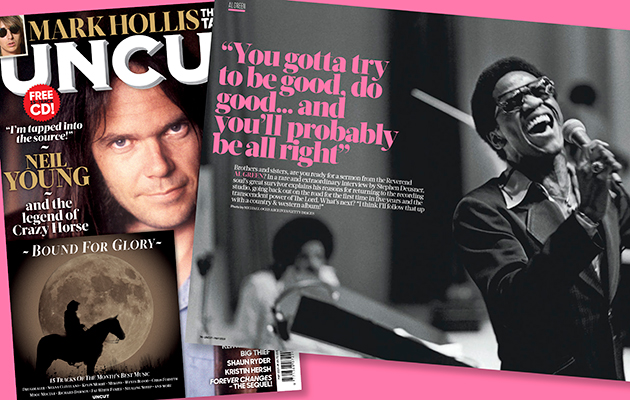 In the new issue of Uncut – in shops tomorrow (March 21) and available to buy online now by clicking here – we catch up with Al Green as he delivers a stirring sermon to his congregation in Memphis’s Full Gospel Tabernacle Church.

The 72-year-old soul legend has returned to the recording studio and is preparing to head out on tour for the first time in five years. But as Uncut’s Stephen Deusner discovers, that doesn’t mean he’s about to neglect his church duties.

“I caught a monster,”  Green testifies, standing at the pulpit on a Sunday morning earlier this month. “No, the monster caught me. The cold had me. I didn’t have the cold. The cold said, ‘Albert, come here!’ I said, ‘Oh no, you don’t want me! I’ve been healthy for years!’ The doctor had to give me two types of medicine to get over  this thing. And my little throat ain’t over it yet.”

It seems hard to believe any cold, however monstrous, could weaken that throat or tamp down any of Green’s excitement. He lets out a hearty “Whoo!” to let the crowd of roughly 150 church members and tourists know that he’s back in full health. Green bought this church in 1976 and started preaching almost immediately. Most Sundays he’s right behind the pulpit; during the week he often leads Bible study.

“I don’t really consider it performing at the Tabernacle,” he tells Uncut a few days later. “I consider it doing my job. Al was called to do gospel music before he started doing pop music. So to me it’s just getting back to my roots. It’s  me saying to Christ Jesus, ‘I’m tired of being alone. Lord, take me to the RIVER!’” He sings that last word, drawing out those syllables and lifting his voice into that familiar falsetto, undiminished by age or illness. “That’s what I like. I like the good stuff!”

Green doesn’t consider his new single or tour anything like a comeback. “This is what I do,” he exclaims. “I sing and I do concerts. I’ve been doing this ever since I met Willie Mitchell some place in Texas. I ain’t doing nothing different now from what I was doing then, excerpt for the tabernacle. I’ve been doing that and  I think it’s fantastic.”

Preaching every Sunday has obviously kept  his voice in shape, so there’s no dust to shake off, no nerves to steady as he prepares to hit the road. He just has to handle the logistics of gathering a backing band that’s scattered across the country. “I got people from Kansas City, Jacksonville, Boston, Indianapolis. We have to rehearse pretty soon. They keep saying, ‘We know all the songs but we’d rather go over them with you.’ I just say, ‘OK. Let’s get together.’”

You can read much more about Al Green in the new issue of Uncut, out tomorrow with Neil Young on the cover