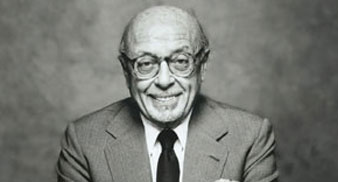 Ahmet Ertegun, Founding Chairman of Atlantic Records, passed away today in New York City at the age of 83. He had been hospitalized with a head injury since October 29, when he fell backstage at a Rolling Stones concert at the Beacon Theatre in Manhattan.

Dr. Howard A Riina, Mr. Ertegun’s neurosurgeon at New York Presbyterian Hospital, Weill Cornell Medical Center, said, “Mr. Ertegun suffered a severe brain injury after he fell in October. He was in a coma and passed away today with his family at his bedside.”

Mr. Ertegun will be buried in a private ceremony in his native Turkey. A memorial service will be conducted in New York after the New Year.

One of the most important figures in the history of modern music, Ahmet Ertegun was born in Istanbul, Turkey on July 31, 1923. The son of the Turkish Ambassador to the United States, Ahmet was raised and educated in Switzerland, Paris, London, and Washington, D.C.

A passionate music fan and collector, he borrowed $10,000 from his dentist and founded Atlantic Records in New York City in the fall of 1947. He signed artists, produced records, wrote songs, and supervised the fledgling label.

Ahmet was founder and Chairman of the Rock and Roll Hall of Fame. In recognition of his pioneering contributions to contemporary music and culture, he was himself elected to the Hall of Fame in 1987, and the Museum’s main exhibition hall in Cleveland bears his name.

In 2000, he was honored as a “Living Legend” by the United States Library of Congress, on the occasion of the Library’s Bicentennial. In June 2006, he was honored with the opening night concert at the 40th Montreux Jazz Festival. He never retired and remained active at Atlantic until his death, serving as Founding Chairman of the company he started six decades ago.