And there's only three songs with rock'n'roll in their titles 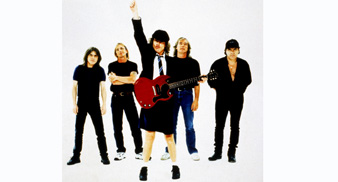 As we reported yesterday, the mighty AC/DC are set to release their first album in eight years on October 20 in the UK.

Now, though, we have a couple more bits of info about this auspicious event. First, if you’re in the States, you’re going to have to visit Wal-Mart, Sam’s Club or the band’s official website, since they’ve got an exclusive on “Black Ice”.

Second, we have a tracklisting, which doesn’t suggest AC/DC are venturing into new thematic areas on the album. In fact, most of us could have sworn that the band must surely have used most of these titles several times already in their fine and long career. How can it be possible, for instance, that they’ve never previously written songs called “Anything Goes”, “Smash’n’Grab”, “She Likes Rock’n’Roll” or “Rocking All The Way”?

Whatever. It’s going to be great, of course, and here’s the full tracklisting: