The new Uncut, as discussed, is in the shops today with The Byrds on the cover, and a free CD of tracks inspired by that band. Woods are included on the comp, and their latest, “Bend Beyond”, is a record I’ve played a lot these past couple of months, but somehow neglected to write much about. 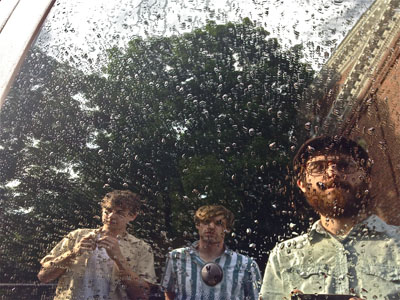 The new Uncut, as discussed, is in the shops today with The Byrds on the cover, and a free CD of tracks inspired by that band. Woods are included on the comp, and their latest, “Bend Beyond”, is a record I’ve played a lot these past couple of months, but somehow neglected to write much about.

“Bend Beyond” actually came out this week, rather inappropriately given that its woozy good vibes seem more suited to high summer rather than the cusp of autumn. If, in the past, Jeremy Earl’s band (and, indeed, his excellent label Woodsist) have appeared a little torn between frail indie-pop and something more freeform and psychedelic, many of the 12 songs here feel a good deal more substantial. Where once they were bashful and sketchy, “Bend Beyond” showcases a band whose good ideas have coalesced into genuinely memorable songs.

From the start, and the title track, there feels like a new focus and confidence. “Bend Beyond” is, like many of the other tracks, a neatly compressed series of jams, punctuated with inventive solos. Earl’s quavering, reedy voice still marks out Woods as fundamentally indie kids, but the tangled riffing also puts them into a classic Californian tradition (even though they come from Brooklyn).

That’s emphasised further by the next track, “Cali In A Cup”; dippy, marginally fried, immensely catchy folk-rock, with a harmonica line soaked in fuzztone in a really clever way.

Woods don’t sound a great deal like Teenage Fanclub – there are no harmonies to speak of, for a start – but there’s something comparable about ambling, ragged singalongs like “Cali In A Cup”, “Is It Honest” and “Lily”. It’s a sense, maybe, of a band so artfully absorbing their classic influences that they come out in a tumbling, jangling, loving way rather than a crippling one.

So “Find Them Empty” is a terrific, wistful kind of Nuggety garage rock, built on churning organ and a spectacularly needling guitar line, while a bunch of stripped-back ballads mix well with another fine recent album I’ve neglected to write about – “Sic Alps” by Sic Alps, where previously haphazard skills are shaped into exquisite and blasted reveries in the vein of “Sister Lovers”. There’s still an endearingly random aspect to “Bend Beyond”: the instrumental “Cascade” is a spindly, tentative squiggle with the faintest hint of hi-life.

Mostly, though, it feels like promise realised, never more so than on “Size Meets The Sound”, a brilliant and compact psych-rocker with a surging refrain oddly – and surely accidentally – redolent of The House Of Love’s “Shine On”. Cracking album.