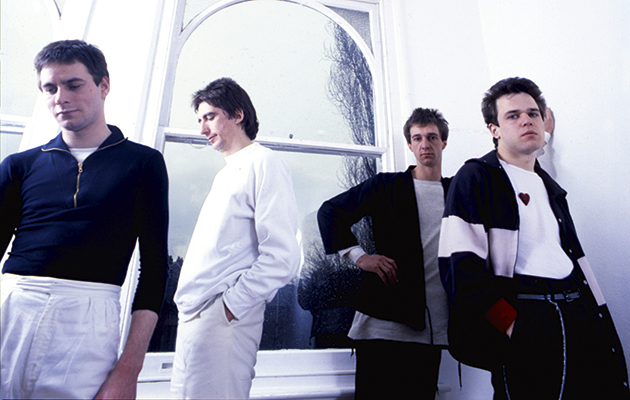 Practice makes perfect: Wire take us through 40 years of ‘difficult records’ – from their 1977 debut Pink Flag to 2017’s Silver/Lead – in this piece from the Uncut archive. Originally published in our May 2017 issue.

Although they’re known as one of post-punk’s most progressive groups, Wire’s primary mode has been one of wild intuition. “You can talk about these things,” says bassist, singer and lyricist Graham Lewis, “but talking only gets you so far. It’s the intuition that’s important, the dynamic tension.”

Working quickly, usually creating their arrangements spontaneously in the studio, the four-piece have produced stellar work that draws from punk, experimental music and electronica on albums such as Pink Flag, Chairs Missing and Send.

With Matthew Simms having replaced original guitarist Bruce Gilbert, Wire are continuing their run of acclaimed albums with this year’s Silver/Lead, put out to celebrate the 40th anniversary of their debut.

“Is it fit for being an anniversary album?” muses guitarist, singer and songwriter Colin Newman. “Does it really matter? We wanted to say, ‘Here we are, we’re 40 years on and we still don’t give a toss. Sorry, we’re not going to be performing Pink Flag in a basement in Covent Garden! If that’s what you were wishing for, perhaps you should grow up a bit.’”

PINK FLAG
HARVEST, 1977
The quartet were taken from the Roxy club in London’s Covent Garden to the state-of-the-art Advision Studios to create this monumental, 21-track opus.

ROBERT GREY (DRUMS): Going from a homemade rehearsal place in a squat in Stockwell, to Advision, was just ridiculous for a completely unknown group.
GRAHAM LEWIS (BASS, VOCALS): It was [producer] Mike Thorne’s choice. I think Yes had just encamped there for six months. It was rather impressive, with a very big room. Mike eased us in with a bottle of whisky on the first day.
COLIN NEWMAN (GUITAR, VOCALS): He had a pottery marmalade jar, and inside it he brought his homegrown. That’s how it was in the ’70s; people in the industry would supply you with whatever you wanted – Wire were never abusers, though. Normally the first day of recording starts with getting the drum sounds, but we had no studio experience. We smoked a few joints and played, and Bruce was convinced that we’d recorded the album. We were very disappointed to come into the control room and discover that they’d only been listening to the bass drum. We had developed a bunch more material than that which fitted with the aesthetic of Pink Flag – for example [Chairs Missing track] “I Feel Mysterious Today” I played to the band on the sessions for Pink Flag. But Mike was like, “We shouldn’t put that on, it’s too far away.” It was Mike’s idea that those 21 tracks were the material that made up Pink Flag. It was obvious to me that once we made one album, we would have to make more, and the next one would have to be different.
LEWIS: It’s a deceptively simple record. The reason Pink Flag sounds so minimal but so strong and good is that you might have 12 guitars overdubbed, playing differently, but on the same chord.
NEWMAN: There are actually keyboards on all the Wire albums Mike Thorne produced. On Pink Flag, it was Fender Rhodes through a distortion box.