The momentous musical summit remembered in the latest Uncut 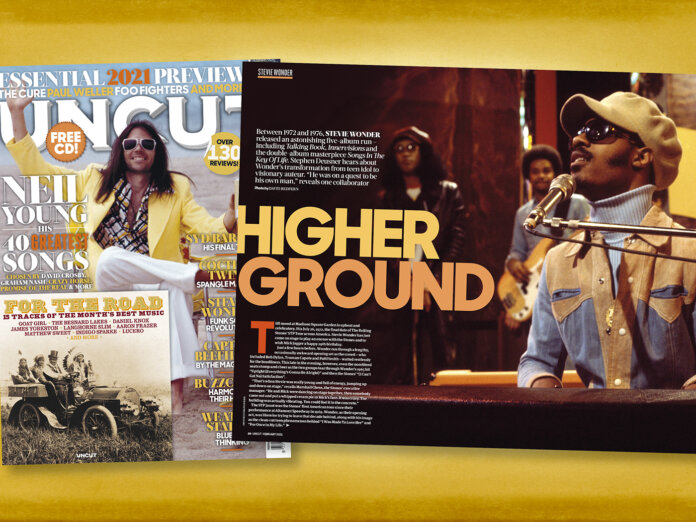 The latest issue of Uncut – in shops now or available to buy online by clicking here – includes a fascinating survey of Stevie Wonder’s early-’70s, during which he transformed from teen idol to the visionary auteur behind double-album masterpiece, Songs In The Key Of Life. The story begins at Madison Square Garden on July 26, 1972, the final date of The Rolling Stones’ STP Tour across America.

Stevie Wonder has just come on stage to play an encore with The Stones and to wish Mick Jagger a happy 29th birthday. Even the nosebleed seats stomp and cheer as the two groups tear through Wonder’s 1965 hit “Uptight (Everything’s Gonna Be Alright)” and then the Stones’ “(I Can’t Get No) Satisfaction”.

“That’s when Stevie was really young and full of energy, jumping up and down on stage,” recalls Marshall Chess, the Stones’ executive manager. “He and Mick were dancing on stage together, then somebody came out and put a whipped cream pie in Mick’s face. It was crazy. The building was actually vibrating. You could feel it in the concrete.”

The STP jaunt was the Stones’ first American tour since their performance at Altamont Speedway in 1969. Wonder, as their opening act, was likewise trying to leave that decade behind, along with his image as the clean-cut teen phenomenon behind “I Was Made To Love Her” and “For Once In My Life”.

Prior to the Stones tour, Wonder had faced some difficult audiences as he struggled to redefine himself, introducing longer, heavier, funkier songs to his setlist. “Sometimes we would get these gigs at supper clubs, and we’d show up in bellbottom jeans and fringe jackets,” recalls David Sanborn, who played saxophone in backing band Wonderlove. “Everybody else would be in tuxes and tails. Stevie was adamant about playing the new stuff, so it could get tense at times. Sometimes the audience was just not having it. They got restless because they weren’t hearing what they wanted to hear, what they had paid their money to hear. We understood that, so we did play ‘Signed, Sealed, Delivered I’m Yours’ and ‘If You Really Love Me’. We always played the shit out of them.”

Winning over Stones fans wasn’t much easier, but Wonder drew on 12 years of experience – more than half his life – working crowds as part of Motown package tours with The Temptations, The Supremes, and other label acts. When the Stones were arrested in Rhode Island after Richards assaulted a journalist, Stevie and Wonderlove played a double set in Boston that night to calm the audience – who grew rowdy when the Stones looked like no-shows.

The STP tour was such a success and the chemistry between the two acts so palpable that they collaborated on a joint double live album, with one LP devoted to Wonder’s set and the other to the Stones. Even though the record never materialised, the tour did exactly what he needed it to do. “That’s when his popularity just jumped,” confirms Deniece Williams, who toured as a member of Wonderlove.

The Stones tour helped usher in a new imperial phase in Stevie Wonder’s career, as he transformed himself over a string of bold and progressive albums beginning with 1972’s Music Of My Mind album and culminating in 1976’s Songs In The Key Of Life. Together, these albums are as much about Wonder’s creative development as they are, from another perspective, about his attempts to defy the Motown assembly-line approach to writing, recording, and touring. “At Motown, Stevie never really got a chance to be himself,” says Robert Margouleff, who played a crucial role in Wonder’s transformation from teen idol to visionary rock star. “He was on a quest to be his own man.”