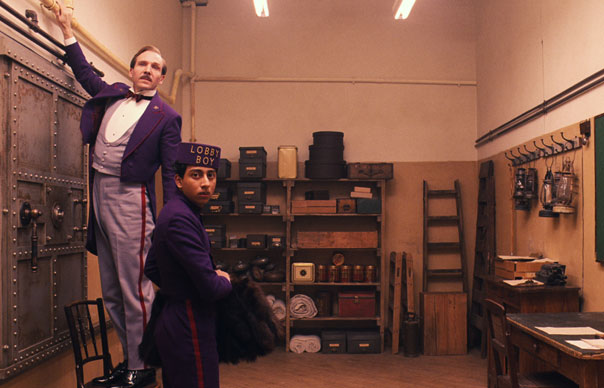 There, she helps the owner, Mendl, concoct elaborate and sumptuous-looking pasties and cakes for the locals in l’entre deux guerres Lutz, a sleepy, Alpine town in the Republic of Zubrowka. These fabulous confections might reasonably act as an appropriate metaphor for Anderson’s film itself: colourful and delightful, rich with handcrafted detail. Anderson, of course, has habitually set his films in their own self-contained environments – an elite prep school, a New York brownstone, a submarine, a train car, even an island – but here he has gone one step further to create an entire European state, populated by ancient aristocratic dynasties and eccentric but well-meaning civilians. At the centre of this fuddy Ruritanian analogue lies the Grand Budapest Hotel, a splendid dolls’ house of a building overseen by the particular but kindly concierge, Gustave H (Ralph Fiennes). In a typical Anderson flourish, M. Gustave’s antics are presented to us via a number of leapfrogging narratives (distinguished by different aspect ratios, naturally): a girl reading a book in the present day called The Grand Hotel Budapest, a to-camera address by its author in 1985, a flashback to a 1969 meeting in the Hotel which inspired the book, and finally to 1932, where we find the Hotel in its imperial phase and Gustave in full pomp.

What follows – this being a Wes Anderson film – involves a secret code, mysterious societies, a murder, a priceless painting, the plot skipping gamely from hotel to prison and beyond to the snowy peaks of Zubrowka. As you’d expect, the colour palette and composition of every shot is exquisite, the attention to detail fastidious. Certain scenes rendered in stop-frame animation – a ski chase, a ride on a funicular – blend imperceptibly into the live action. It is utterly artificial and yet wholly beguiling. A lot of that is to do with the impressive work done here by Ralph Fiennes – admittedly, not an actor known for his comedy work, but who is terrific as M. Gustave, all prickly hauteur and prissy imperiousness, yet also an incorrigible libertine who seduces the hotel’s elderly female guests (“84? I’ve had older.”) Fiennes’ nimble performance anchors the film – though props are due to the usual high-functioning cast Anderson has assembled for this exuberant caper, including Bill Murray, Willem Dafoe, Jeff Goldlblum, Adrien Brody, Ed Norton, Tilda Swinton and Harvey Keitel.

A comedy, yes, but the film has a deepening melancholic edge to it: an awareness that this wonderfully preserved Belle Époque world is facing the vicissitudes of the period: towards the film’s end, the Hotel is requisitioned as a barracks for troops in familiar dark uniforms; certain travel permits are no suddenly longer valid. While Zubrowka is a mittel-European fantasia, nevertheless Anderson has decided that the very real intrusion of war is valid, the era to be trampled underfoot by an invading fascist army. The key, perhaps, to understanding the film lies in the 1969 setting. There, the book’s author – played by Jude Law – hears the story of M. Gustave’s exploits from Zero Mustapha (F Murray Abraham), who was once Gustave’s protégé (played by a pencil-mostachio’d Tony Revolori) and is now its owner. In the years since the war, the Grand Budapest Hotel has become “an enchanted old ruin”, run down and shabby. Although Anderson’s film announces itself as a whimsical construct, its artifice continually reinforced by literary devices, narrators, time periods and ‘Chapter’ headings, the murmurings of European conflict become increasingly hard to avoid. This celebration of the glory days of a particular era are finally, quite subtly overtaken by a genuine sadness.

The Grand Budapest Hotel opens in the UK on March 7