Wayne Coyne of The Flaming Lips – My Life In Music

The Flaming Lips play London's Brixton Academy on May 28, ahead of their full cover of The Beatles' Sgt Pepper's Lonely Hearts Club Band on October 28 – but back in September 2010's Uncut (Take 160), frontman Wayne Coyne revealed the strange listening experiences that have shaped his life… Neil on acid! The Beatles through one speaker! And Amy MacDonald… Interview: John Lewis ______________________ The first record I ever bought Jimi Hendrix – Crash Landing (1975) 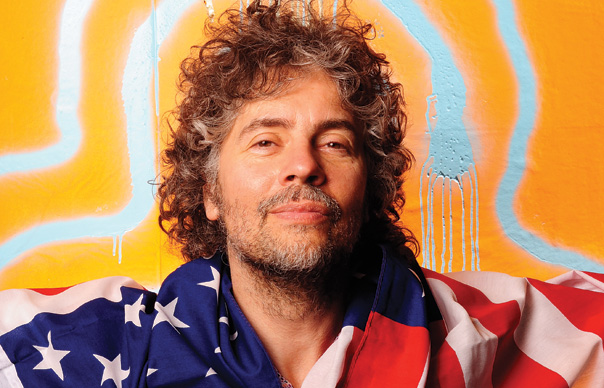 The Flaming Lips play London’s Brixton Academy on May 28, ahead of their full cover of The Beatles’ Sgt Pepper’s Lonely Hearts Club Band on October 28 – but back in September 2010’s Uncut (Take 160), frontman Wayne Coyne revealed the strange listening experiences that have shaped his life… Neil on acid! The Beatles through one speaker! And Amy MacDonald… Interview: John Lewis

The first record I ever bought
Jimi Hendrix – Crash Landing (1975)
I’m not proud of this buy. It’s one of many Hendrix records made after he died, completed by Alan Douglas with session musicians. My older brothers used to buy all the LPs I needed, but I bought this as nobody I knew owned it. So I was filled with glee, but that soon faded after putting it on. There’s one great, crazy, distorted song, “Peace In Mississippi”, but I’m not sure if Hendrix is even playing on it!

My first experience of sonic weirdness
The Beatles – Sgt Pepper’s Lonely Hearts Club Band (1967)
My older brothers listened to music on an eight-track cartridge, but they didn’t connect up their stereo system right. So, for years, all we could hear was the left side of the system. I listened to Sgt Pepper a lot, not realising that huge chunks of vocals and instruments were missing. When I hear a proper mix, it sounds wrong. My versions sound better! They have this eerie, empty quality.

The record that takes me back to childhood
The Bee Gees – Lonely Days (1970)
A strange arrangement, with spooky harmonies. It’s sloppy, slightly out-of-time, and with bad handclaps instead of a drumkit… but, I don’t hear it often enough, and when I do it’s like a time machine. Suddenly, it’s 1970, I’m in fourth grade, in love with my childhood crush. Music has that ability. It’s a motherfucker. You never know which spot in your mind is going to be illuminated. It can be wonderful, or treacherous.

My favourite Pink Floyd album
Pink Floyd – Meddle (1971)
I veer between loving the Syd stuff and then going for the Roger Waters-driven era. But I’ll pick Meddle as my favourite. It’s a group effort, with lots of Gilmour vocals. I also like The Dark Side Of The Moon. That was until we re-recorded it last year. Now we’re all sick of it, ha! We recorded every song in a weekend. It was entirely relaxed, no pressure, no desire for immortality. Often the best stuff is made like that.

My favourite jazz album
Miles Davis – Bitches Brew (1970)
I’m obsessed with Miles from [1969’s] In A Silent Way up to about 1975. Whenever I want to hear music that’s just a strange cacophony of sometimes melodic stuff, sometimes abstract stuff, I just have to listen to that. It’s not like pop music where you know every millisecond of it, it’s sprawling, freaky stuff. Every time I solve one mystery about the album, 10 other mysteries pop
up behind it.

The song I’d like to have written
Joe Cocker – You Are So Beautiful (1974)
This is basically a piano vamp with Cocker singing the same line, “You are so beautiful to me”, over and over, with hardly any other words. The chord changes go around in an endless cycle. It sounds so simple, but it’s devastatingly effective; it’s moving as hell. I think about songs I’d like to have written all the time, and they’re usually very simple and functional. “Happy Birthday To You”, that’s a killer.

My guilty pleasure
Amy MacDonald – A Curious Thing (2010)
When you’re young, you listen to certain music because it’s cool. Then you stop caring about that. So no musical pleasures are guilty to me. I saw Amy sing at some festivals over the last few years and thought, ‘Wow, this is powerful.’ When listing new music I liked, I’d mention her, and people would be like, “You like that?” And I was like, “Sorry, she’s not cool then?” But I was utterly blown away by her performances.

My favourite film soundtrack
Jerry Goldsmith – Planet Of The Apes (1968)
A landmark recording, and one that influenced the soundtrack to Christmas On Mars. Oddly, I don’t think the music is used very well in the movie. But on its own it’s fucking crazy. It’s dense, cleverly written, sometimes atonal and shronky, and I still don’t know what some of the sounds are. That’s what I love about it. I don’t think many girls are going to be dancing to it if you put it on at your house.

The first music I heard on acid
CSNY – Helpless (1970)
I’m often told our music has hallucinogenic properties, even though I don’t like LSD much. I distinctly recall my first experience of hallucinogens, and this Neil Young song playing. There’s something in the slide guitar part that is still a bad trigger for me – it haunts me to this day. In fact it’s probably derailed the interview! It’s crazy how a sweet, benign song can become freighted with danger because of your own experience of it.

My favourite dance record
LCD Soundsystem – Sound Of Silver (2007)
For me, dance music works by establishing a trance – one that relaxes your mind – but it can also be very dense. James Murphy is amazing. I saw LCD Soundsystem the other night, and there were moments where it reminded me of Black Flag in the early ’80s, when Greg Ginn would do these long, strange guitar jams. LCD were making music that was hypnotic and dancey, but with real rock intensity.