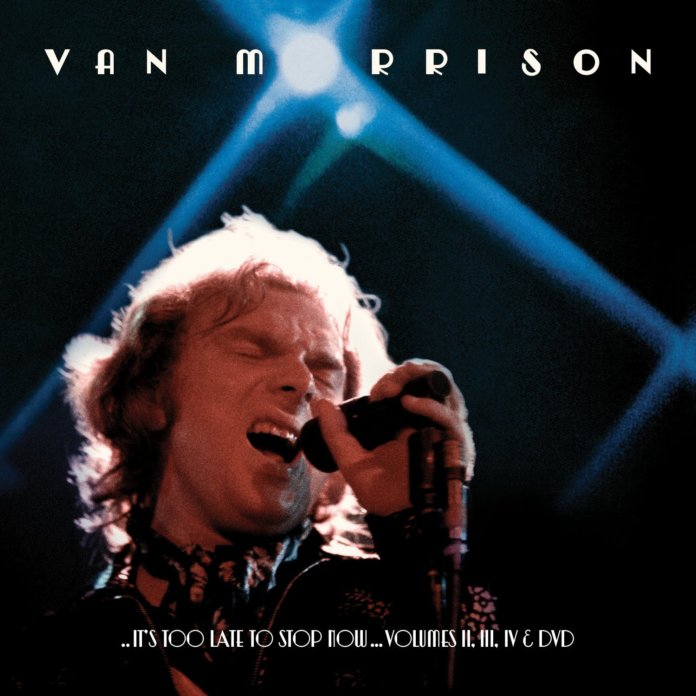 How to understand the motivations and anxieties of Van Morrison in the summer of 1973, a cabaret star trapped in the most recalcitrant hermit’s body? “I’ve never been so enthralled by such a premeditated lack of visual entertainment,” wrote the NME’s Roy Carr after a gig that July in Amsterdam.

A few days later, Morrison and the Caledonia Soul Orchestra rolled into London’s Rainbow Theatre, where a BBC crew captured the weird inversions of their show. When you hear those performances on the original live set, “It’s Too Late To Stop Now”, and this new 3CD sequel, it’s easy to imagine a soul revue anchored by a vigorous and impassioned frontman: every roar, after all, seems physically transporting; every band introduction and piece of shtick a meticulous re-interpretation of showbiz craft.

Watching the BBC footage on the DVD part of this new package, however, a more familiar Morrison dominates. He wears a wristwatch clamped over his left shirt cuff, making it easier for him to check the time, and spends the majority of the set with his eyes shut, right hand discreetly flicking to the dynamic movements of his band. That band seem acutely tuned to his whims, but he barely even glances at them, let alone interacts. When he reaches the part in “Cyprus Avenue” about how “all the little girls rhyme something/On the way back home from school,” his three-year-old daughter Shana appears onstage beside him, and is left unacknowledged and fiddling with a tambourine.

It is only at the end of the song that he explodes into a brief frenzy of pacing and leaping to match the ecstacies of his voice. “Caravan”, too, culminates in a trouser-splitting kick of triumph that seemingly comes out of nowhere. But as Carr reported from Amsterdam, that brief and explosive release of the tension was a regular climax of the show. What looked like unmediated spontaneity was really, in its way, all part of the act.

“Volumes II, III & IV” are an emphatic reassertion that Morrison’s 1973 tour was among the greatest ever, but they also cast a few aspersions on the idea of the shows being mercurial, improvisatory, with songs being pulled into radical new shapes every night. The 45 songs are drawn from the same shows – in LA, Santa Monica and London – that provided the 18 tracks on what we should now call “It’s Too Late To Stop Now: Volume I”. Ad-libs are revealed as regular ornamentations. The stutters, false endings, devastated pauses and exuberant finale of “Cyprus Avenue” were not, it transpires, a one-off revelation, but a nightly miracle of singer and 11-piece band (who deserve equal credit in the album title, by the way) turning simultaneously on the same dime. The biggest difference comes in the audience reactions: uneasy giggling in the intimacy of LA’s Troubadour club; hooting rapture in the wider space of London’s Rainbow.

Rehearsal does not, though, diminish the potency of this music. Morrison might not have the moves of his R&B heroes, but he understands totally how musical transcendence can be achieved through discipline. Variety comes not from nightly rethinks of the core canon, but from a deep and intoxicating repertoire. “There were as many songs again that were mixed but didn’t get released,” bassist David Hayes told Uncut last year, and the new album precisely bears that out: 18 of the 45 tracks are songs that didn’t feature on the original set. Four new selections from “Hard Nose The Highway” realise the potential of ‘73’s rather overproduced studio work, with “Snow In San Anselmo” an unexpected highlight. Shorn of its choral ostentation, it’s revealed as a flighty reverie that would’ve fitted neatly on “Moondance”.

“Moondance” itself turns up in Santa Monica (Volume III), at a dash, while “Sweet Thing” and “The Way Young Lovers Do” show how, as with “Cyprus Avenue”, Morrison and the Caledonia Soul Orchestra opened up “Astral Weeks”’ internalised meditations into big band showstoppers: John Platania’s guitar pinging off the horns and strings in “Sweet Thing”, at both Santa Monica and London shows, is a particularly treat. Morrison’s extemporising about a “Coup De Ville” is complemented by references to Thunderbird in California, and Champagne in Finsbury Park.

A burnished Morrison/Platania blues, “I Paid The Price”, is one of two original songs that haven’t previously seen official release, the other being “No Way”, a jazz mooch written by pianist Jef Labes that could easily pass as a Mose Allison cover. Without the evidence of film, Morrison could be having a rare old time, as he belts out “Hey Good Lookin’” and “Buona Sera”, the beloved entertainer dusting down a few canonical moves. Listening again, though, there is something stranger and more compelling than playfulness at work. However fully Morrison inhabits these rowdy celebrations, he never seems exactly infected by their joy. Epiphanies have to be worked for, and the idea of joy embedded within the songs is not instinctively channelled by this most unreadable of artists: it is something to ruthlessly pursue and then, eventually, to attack.