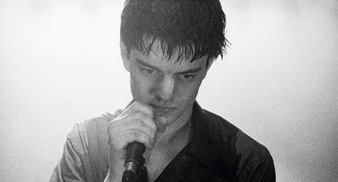 UNCUT: When was the first time you heard the name Ian Curtis?

SAM RILEY: I was 18, just starting with my band 10,000 Things, playing a pub in Leeds. Under our name on the wall it said, “Ian Curtis fronts The Rolling Stones”. Someone explained to me: “Y’know, the ones who did ‘Love Will Tear Us Apart’.” So I immediately borrowed a copy of Unknown Pleasures and played “Transmission” in the car a lot – yeah, the most obvious track!

But it’s probably an advantage that Ian wasn’t one of my idols. Now, obviously, I love Joy Division. But it would have meant added pressure. I have a lot of respect for him, not necessarily reverence. It’s a delicate balance. I definitely didn’t try to play him as an icon.

Most young men aren’t particularly charming, and he wasn’t an ideal husband or father. The same goes for New Order – I don’t blame them for not really spotting his problems. Young guys tend to ignore one another beneath the surface.

As it’s based on [Ian’s wife] Deborah Curtis’ book, hopefully it’s fair.
He was a flawed individual. I can relate to that. Who can’t?

So how did you land the part?

When my band were offered a deal, I told my agent I hated acting! I’d had one line as Mark E Smith in 24-Hour Party People, which was cut, after I’d auditioned as Stephen Morris! Anyway, after three years my band got dropped. I was working in a warehouse back in Leeds. Acting had to better than that, and by coincidence Anton was looking for someone like… me.

Did you impersonate Curtis?

Well, while I was waiting I saw the guy auditioning before me go past the window dancing and shaking like Ian. I thought, ‘Fuck’. So I ran downstairs to the toilet and practised the dance in the mirror. Anton tied an iPod to my arm and said, “Can I see you move?” I’d read that the likes of Jude Law were up for this, so thought I had no chance. Then they rang me on my 26th birthday – January 8, same birthday as Elvis and Bowie, which as a kid I thought might “mean” something – to tell me that I’d got it.

How anxious are you and Anton about the reaction to the film from Joy Division fans?

They’re sceptical before seeing it, I can understand that. When they announced I’d got the part, I went on a Joy Division online forum, which was pretty stupid of me. It was all: “What the fuck? Who is this? Doesn’t look anything like him! He’s a singer in a shit band! Is he American? Why didn’t they get Christopher Eccleston?”

While I knew I couldn’t please everybody, this was the best opportunity anyone had ever given me, and I wasn’t about to turn it down out of risk of upsetting people. Ian is precious to people, almost like a saint, and they don’t want to see somebody come in and ruin it. But I knew Anton wouldn’t follow the usual formula: it’s a film about a young man, not a rock star. Even icons go to the toilet! New Order love it. Bernard Sumner’s advice to me was: “Have fun, we did.” If illusions get shattered, that’s real life.

The live performances are very powerful. Wasn’t the original plan to mime?

Yes, but we’d rehearsed so hard, we were desperate to play. It’d be
more convincing that way. OK I don’t have the exact voice, or moves, but we’re trying to get the essence of this band, not an identikit. We weren’t just a bunch of poncey actors clocking in. We were also lucky that Joy Division were never the tightest band live! When I first heard the bootlegs I couldn’t believe it. I’m sure Bernard’s playing a different song from Hooky most of the time! Some of the extras had come all the way from America.

One guy in the front row says, “Are you Ian?” Which is a weird question anyway. He glares at me: “This’d better be fucking good.” Another guy lifts his shirt and he’s got Ian’s face tattooed, life-size, across his chest. No pressure, then. I was terrified. But we wanted to show them we were taking it seriously. As far as we were concerned, during takes, we were Joy Division up there.

How did you deal with the more harrowing scenes within the Curtis marriage?

Thank God Samantha Morton was there for both me and Anton: neither of us knew how to approach rehearsals at first, but she brought such experience and dedication, and was lovely.