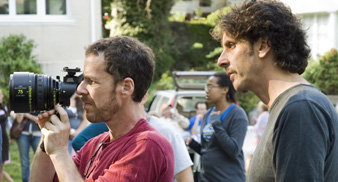 UP CLOSE AND PERSONAL: JOEL AND ETHAN COEN

And you wouldn’t have done it without them?

ETHAN: I don’t know..! We considered ourselves really lucky when they all agreed to do it. I don’t know what we would have done. But we have written specific parts for actors before and not done the movie because they couldn’t do it. The Big Lebowski was something we wrote for Jeff Bridges, and we set it aside for a couple of years because he wasn’t available. John Goodman also had a problem and nearly didn’t do it.

Why choose Washington and the world of espionage?

JOEL: I don’t know. Honestly. We just said, “Let’s do a spy movie,” I think mostly because we had never done one before. Honestly, it could have been a dog movie or an outer-space movie.

ETHAN: He’d done a commercial with his hair like that, and he just happened to go into wardrobe fittings for this movie with that hair. And we all thought, us and Brad, that it was a good picture. It kind of happened by happenstance, and we looked at it and it just kind of worked with the outfit.

JOEL: We like to give our actors haircuts that they have to cover up when they’re away from the set.

ETHAN: It’s all part of defining the external part of the character: the haircut and clothes.

The names are an essential part of the character too. Linda Litzke, Chad Feldheimer, Harry Pfarrer… Do you agonise over them?

ETHAN: That’s an interesting question, because it’s so arbitrary – and yet sometimes you do go, “Right, it has to be this.” And sometimes you make a mistake. We realised a few years too late that Jon Polito’s character in The Man Who Wasn’t There [ital]should[ital] have been named Larry London. I can’t even remember what name we gave him. But it was the wrong one.

JOEL: It was Creighton…

JOEL: Creighton Tolliver. Yeah. But he should have been Larry London. True!

ETHAN: So we fucked that one up.

Is there any reason why they often sound German?

JOEL: No. Until someone pointed it out, we had never thought about it. It wasn’t conscious. Litzke is the name of a bakery near where we grew up. Feldheimer…? No idea. It’s names that you’ve heard before, that you pick out, and they come from all kinds of places. Just weird names, like businesses you sometimes see. It’s very arbitrary.

Do you see it as a political film?

ETHAN: No. With those characters, it’s not political per se. Although it does hark back to the paranoia movies that were popular in the 60 and 70s. Those were kinda political movies, but our film is more about those movies than politics. I don’t think it’s making a political statement.

So there’s no politics in your comedy. But do you see comedy in politics?

JOEL: Well, sure. Some of the stuff that happens, yeah.

ETHAN: Well, I tell you, the one thing we were thinking about was the Bill Clinton impeachment thing, the Monica Lewinsky affair. There was this woman called Linda Tripp – you might not know or remember the name, but she was the middle-aged confidante of…

JOEL: …Monica Lewinsky. And early on, we thought, “Wouldn’t it be fun to see Fran play a character that’s a little like Linda Tripp?” Linda Tripp went on to have all these cosmetic surgeries done. She complete redid her appearance through cosmetic surgery, from the beginning of this political scandal to the end of it. So, take away all the political intrigue…

ETHAN: …And the character itself is interesting. This Washington woman whose decided she needs to have all this plastic surgery. And so we put that character in a different context.

Was it more fun to make than No Country For Old Men?

ETHAN: Yes, for any number of reasons. We weren’t at the mercy of the weather as much, obviously.

And did the Oscar change things for you?

Come on… Don’t you want to talk about it?!

JOEL: No, it’s not that. It’s just that this movie and the movie we’re about to start shooting in a week or two were both written and financed before we made No Country For Old Men.

ETHAN: In this case, we shot most of it before we got the Oscar.

JOEL: Y’know, life goes on. It doesn’t affect us in any substantive way on a day-to-day basis, or even significantly on a long-term basis. It’s just this weird thing that happened to us and will be forgotten about in a few months.

ETHAN: It’s funny. There’s something very odd about it. It goes right in the Life Is Strange box. It was never an ambition to grow up and win an Academy Award, so when it happens you go, “Weird!”

ETHAN: It is good, because the physical award is so iconic. It’s a shape that everyone knows. You stick ’em there in the office…

JOEL: [Laughs] We could bowl with these things! Just line ’em up.

Do you enjoy going to the Oscars?

JOEL: Well, the first time we went was really interesting, because it was a new experience. It’s like a lot of things. You know the saying: “Once is an experiment, twice you’re a pervert.” It’s interesting the first time, but to go back repeatedly… It’s long and it’s tedious.