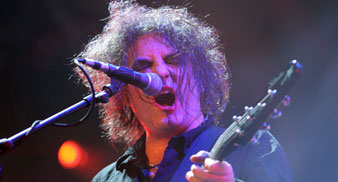 It doesn’t get much better than this. Since you ask, Uncut is in Spain, somewhere between Barcelona and Valencia, at what’s fast becoming our favourite music festival – Benicassim. Now in its eleventh year, Benicassim runs across four nights, boasts a no-mud-here-thanks climate, stunning views (mountains stage left, sea stage right) and a shrewdly programmed bill running the gamut from rock icons of the first water to cutting-edge electronica. Did we have fun? Did Jackie Kennedy wear a black dress?

Touching down for the opening Thursday night, Uncut is disappointed by The Tears who, despite the visible chemistry between Brett Anderson and Bernard Butler – together again after all these years etc etc – seem to be in the invidious position of having a collection of songs lacking anything approaching discernable melody. Ouch. Despite being somewhat past their sell-by date, headliners Underworld pull out all the stops, belting out a barrage of stadium rave anthems accompanied by a wildly trippy light show. “Cowgirl” lasts till dawn, as it damn well should.

Friday finds us bouncing around to Lemon Jelly and camping it up to Fischerspooner before the serious action of the night begins. The Cure –stripped down to a four-piece including veteran members Robert Smith, Simon Gallup,and Porl Thompson – play for two hours. It’s Kohl eyeliner heaven, boys and girls, highlights including “Play For Today”, “M”, “End” and “Primary”, “Never Enough” and “Kyoto Song”. Quite how we go from the none-more-black Gothery of The Cure to the all-singing, all-dancing Carnival rumpus of Basement Jaxx is one of the many delights of Benicassim. Felix and Simon – plus dancers, singers, trumpeters – lay down one of the finest party vibes we’ve witnessed for a long time, climaxing with a demented version of Motorhead’s “Ace Of Spades” and “Where’s Your Head At?”.

Saturday finds Uncut taking things a mite easier than previous nights – those pesky European spirit measures can take their toll, you know – so we sensibly bypass Keane to take in the Kaiser Chiefs before the evening’s return-to-grunge highlights: The Lemonheads and Dinosaur Jr. Evan Dando – looking particularly chipper – led the ‘Heads through a crowd-pleasing greatest hits set, irrepressible melodies beneath Catalan skies, including “It’s A Shame About Ray”, “Confetti”, “Rudderless”, “Big Gay Heart”, and “My Drug Buddy”. Dando returns for a solo encore which featured covers of Gram Parsons’ “$1,000 Dollar Wedding” and Mike Nesmith’s “Different Drum”. Dinosaur – in their original incarnation of J Mascis, Lou Barlow and Murph – raise a storm, It’s easily the loudest set of the weekend, the trio slamming out “Little Fury Things”, “Just Like Heaven” and “Freakscene”. Proper rock music, dontcha know.

Nick Cave and the Bad Seeds set Sunday night off in apocalyptic style, their Goth-goes-gospel turning into sulphuric soul, an incendiary “Get Ready For Love” leading into a beautiful rendition of “Straight To You” with Cave at the piano, “The Weeping Song” and “The Ship Song”, before back up with “Deanna” and a haunting, gripping “Mercy Seat”. Cave, cigarette perpetually in hand, spits and screams like a vaudeville demon. It’s a great piece of showmanship, unlike Oasis’ Liam Gallagher, whose one-pose performance either stands or falls depending on how good the rest of the band are. Tonight, they’re disappointing, never quite hitting the mark, throwing a few shapes but little more. Sure, there are some hits here – “Live Forever”, “Cigarettes And Alcohol”, “Morning Glory”, “Champagne Supernova”– but the performance is lacklustre. Dedicating “Rock N Roll Star” to Robin Cook, though, is a nice touch. Noel asking the massive British contingent to “be nice to the locals” an even better one.

Strangely, it falls to Kasabian to save the night. Never a band who’ve figured highly on Uncut’s radar, we’re surprised to find ourselves singing along raucously to “LSF” and “Club Foot”. Believe us, no one was more surprised than we were.

We finish off in fine style, having it to some particularly fine techno courtesy of Andrew Weatherall. Medics to the rave tent!

And then it’s off, back to Blighty. See you next year!