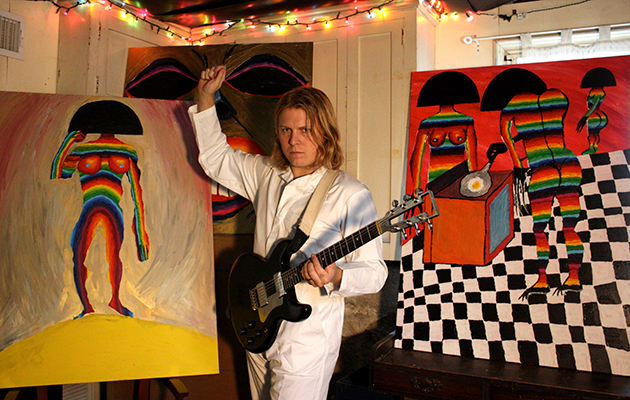 I was back in a basement for this one, but it was cool because Bauer had all this crazy new gear, so we were like kids in a candy shop. It’s crazy, he only got $500 to make Melted with me, because that’s all we had. But by that point, we had a bunch more money to throw around, so it was really cool. We got to do everything at Bauer’s, then mix it at Fantasy Studios in Berkeley, where CCR and a bunch of other bands recorded. We recorded almost the whole thing, and then Bauer got a new snare mic and we did the last song, and it sounded so much better that we were like, “Fuck man, we gotta re-record the whole record!” So we did, because of the snare mic. It’s definitely a step up in fidelity, that one, for Bauer. It was totally worth starting over.

If Slaughterhouse was the sketchy, almost punk record, then this was the super-fucked-up pop version of that. When I was 15, it was like rock’n’roll was really not cool with the punks or the weirdos – this was when dance-punk was going on, and the end of screamo and noise-rock. By the time I was in San Francisco, rock’n’roll still wasn’t cool, but you could play guitar and do garage-rock stuff. But honestly, at that time, to do a glammy thing was not cool, I think that’s why I was excited about it. I’m very happy that rock’n’roll is ok, nowadays, to try again!

I used to be a total garage rock purist when I was 20. I’m so much more open-minded in my musical taste now, and I think that has a lot to do with me wanting to write different stuff. Also, I wasn’t so insecure about singing or production. You know, it’s kind of a truth in garage rock that people hide behind reverb and echo and distortion, and I started to get really into the idea of not hiding in certain ways, like I used to. [2011’s] Goodbye Bread was kind of my anti-garage rock record at the time. I had never done anything like it. It’s crazy, because listen to it now and it’s not a clean record, it’s not shiny, it’s weird and it sounds like it’s on tape, but at that time I was like, “This is so clean and frightening and vulnerable…” Many of my albums have ideas that predated the recording – with Twins, it was “I wanna do a pop record where every guitar is a Fuzz War guitar.”

TY SEGALL
MANIPULATOR
DRAG CITY, 2014
Segall’s most ambitious record to date, the effervescent Manipulator takes a tour from rock to folk to Krautrock over 17 epic tracks.

With [2013’s] Sleeper, I needed to see if I could write songs that held out on their own. In my opinion, if I can’t write a good song on an acoustic, then something’s up with me. I wrote Sleeper really quickly, and recorded it at home on my [Tascam] 388, and I was like, ‘This is genuine and real, so it’s done.’ After that, it was interesting for me to then write from other people’s perspectives, even if they were made-up characters or whatever. So I think that’s how Manipulator came about, it was an exercise in trying out different lyrical stylings. A lot of my records have a loose concept. This one’s kind of a media blitz thing, in a nutshell. ‘The Crawler’ is kind of an evil rock star! I spent a month recording this with Chris Woodhouse, which is still the longest by far that I’ve ever recorded a record. There are merits to it, but I wouldn’t do it again, you start to lose perspective. The Dock studio is cool, it’s right next to a banana factory, which is weird. Usually I’m very quick with the basic tracks, because I like shit being fucked-up in a weird way, but that was the one thing Chris and I agreed on – he was like, “I’m gonna be really strict with you when it comes to the drums and singing.” I think there’s a definite difference in my singing after Manipulator – I learned a lot about confidence and recording vocals. We did like 50 takes of vocals for some songs, to get them absolutely right. Same with the drums, he’d be like, “Ah, you sped up in the middle, I don’t think it’s gonna be good.” I think that was really great.

FUZZ
II
IN THE RED, 2015
The second album by Segall’s power trio – also featuring regular collaborator Charles Moothart – is an epic journey through Sabbath-style stoner-rock, with Ty on drums.

Oh dude, playing in Fuzz rules! It’s so much fun. I love playing drums and it’s just great playing drums in a band, especially that kind of a band. Charles is the craziest guitar player I know, he’s absolutely insane, so it’s cool because I feel like there’s a relationship that everybody has in that band that’s pushing each other to try things they’ve not done before. A lot of the drumming on Fuzz I would not have felt comfortable doing or trying until we became a band and we pushed ourselves to go there. It was really exciting being in Sunset Sound – we were all like, “How the fuck did this happen? What the hell…” We had six days there. I had bought the tape machine and board that Bauer had for Goodbye Bread and Twins, because he upgraded to a crazy MCI board and a two-inch 24-track Studer. So I was like, “Dude, if you ever want to sell the other 16-track…” We took those to Sunset Sound, did all the live tracks there, then brought the machine back to my house and finished it there. It was an interesting experience, a total trial-and-error situation. Definitely a little sketchy, but super fun. Everything was written before we went in, but we had to spend a full day at Sunset Sound fleshing out and deciding some parts on a couple of songs, like “Silent Sits The Dustbowl”. For [closing, 14-minute jam] “II”, we had jammed that out at practice to the point where we had a beginning and an end and the middle was different every time. Every day in the studio we did a version of that one, and the best version we kept. Fuzz is super-rewarding for me; I’m very thankful that Charles wanted to do it, because his guitar-playing and songwriting is amazing – Fuzz is, I’d say, two-thirds Charles’ writing and a third of mine. The cool thing about Fuzz is it seems like we do something every three years. Probably we’ll start thinking about the next album when everybody slows down with their own bands.

It felt good to do another self-titled album as a refresher moment, especially after [2016’s] Emotional Mugger. This record doesn’t really have a spin – Emotional Mugger was a super-sketchy concept record thing, Manipulator was like “I wanna do the cleanest, shiniest glam rock record”… They all have a thing, and I think the thing for this record was that I recorded it live with a band. There’s a couple of overdubs, but that’s a band playing. It’s the same idea as Slaughterhouse, but with my songs. Emmett Kelly’s on guitar, we got [Mikal] Cronin on bass, Charles is actually on the drums now, and my friend Ben Boye is playing piano and Wurlitzer, and I’m on guitar and singing. That’s gonna be the band for the indefinite future as well. “Warm Hands” is a story, it’s a total concept song, so I was like, well, we need to have a reprise. Originally, “Warm Hands” and the song before it, “Freedom”, was all supposed to be one song, but I decided it was too long, and that it would be more interesting because of the reprise moment to have it be more of a surprise and have it be its own song. I forget what record I was listening to, where they just brought back a chorus from the A side on the second-to-last song, and I thought it was just the coolest move. I thought I’d like to try it. As for the jam on “Warm Hands”, I love the Dead. I know a lot of people don’t like them, but everyone in the band now is a heavy Deadhead.