The Who: Townshend and Daltrey on Tommy, touring and their 50th anniversary

To Hammersmith, and the launch of The Who’s super deluxe edition of Tommy at Riverside Studios. Tonight, Pete Townshend and Roger Daltrey are attending a special screening of Sensation – The Story Of The Who’s Tommy, a new documentary about the album due for broadcast this Friday [October 25]. 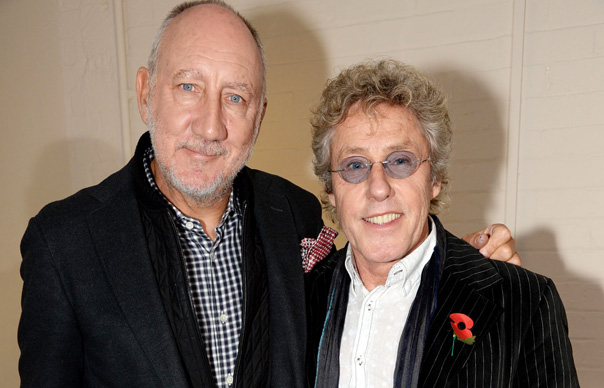 To Hammersmith, and the launch of The Who’s super deluxe edition of Tommy at Riverside Studios. Tonight, Pete Townshend and Roger Daltrey are attending a special screening of Sensation – The Story Of The Who’s Tommy, a new documentary about the album due for broadcast this Friday [October 25].

I caught up with Townshend and Daltrey separately, and we managed to cover off some of their memories of Tommy, The Who’s early run of singles, and what their plans are for the band’s 50th anniversary next year…

Townshend arrives first. He is sombrely dressed in dark jacket, trousers, and a check shirt; the only splash of colour is a red spotted handkerchief sprouting from the breast pocket of his jacket.

Why is Tommy so important to you?
I don’t know if it is the most important thing to me today. It’s a project that’s significant in the Sixties maelstrom of stuff like Dark Side Of The Moon, Sgt Pepper, Pet Sounds, those albums from the Sixties which made a particular mark. So it keeps coming back. This is about Universal trying to make some money at Christmas, isn’t it?

What are your memories of making the album?
Primarily, good. It was a strange recording session. It was very tricky because we were doing lots of shows around it. It was very sporadic, the recording. Very difficult to get momentum going, so when it was all brought together at the end I was quite surprised how well it hung together.

Is there more material in the archive?
I don’t think there’s much else to screw out of it. Although it’s interesting, when I’m dead and gone, and people start to go through all the paperwork that I gather, when I was writing my book I found I had a huge amount of really interesting paper. Not just press clips, but letters, documents, bills, but lots and lots of hand written notes, letters from Kit Lambert, letters from Keith, letters from Eric Clapton, all kinds of interesting things from right the way through my life. All of that stuff, when it’s curated, will be extremely interesting. But I just haven’t got the time. Well, I have got the time, I could easily do it. I gathered it for my book, and when it actually came to it, what I actually did in the book is I just went through it. But every time I come back to do something like this, I feel better informed in a sense, becoming more of a curator of the project.

It’s The Who’s 50th anniversary next year. Do you have any plans to commemorate it?
We will probably just tour and it’ll probably be the last big tour that we do. I wasn’t going to do a tour for the anniversary. I won’t say I enjoyed Quadrophenia, but it was a successful tour. It was good for me because Roger did all the creative work. No, seriously, I just showed up and wanged away on the guitar. I enjoyed it. I wasn’t particularly crazy about being up on the stage and on the road. But with respect to the whole thing about, for me, having been through some real shit in the last 15 years personally, one of the things that really means something to me is to have the affection of the public. This is not a rock star thing to say. Most people think rock stars are cunts and they’re right. A quick interview with Noel Gallagher ands you’ll realize he’s a lovable rogue, isn’t he? But I think we do love it. So for me the important thing is that every time I would meet somebody in the street they would say, “So, are you going to tour again?”, and I’d kind of go, “No, not really.” As I said that, I’d realize they’d go “Oh. OK, then.” Whereas if I was to say yes, I’d get all this wave of “Oh, well, I’ll come and see you!” I’d think, ‘Why would you come and see us?” So, anyway, for our 50th anniversary I won’t have much fun. But I think we need to go out, we need to celebrate it.

Roger Daltrey arrives ten minutes later. He looks a little like a Seventies’ incarnation of Doctor Who enjoying his dotage. His curly hair is thick though greying. He wears blue-tinted round glasses and a long coat which has vertical grey stripes running through it. While Townshend appears thoughtful and intense as he answers questions, Daltrey seems more relaxed and expansive.

Why is Tommy an important album to you?
It was a transitional period. We were always destined to be more than a hit singles band. There was always something very, very different about The Who, and as a singles band we couldn’t express it properly. Playing Tommy live for the first time to audiences, that was an experience. It went on for about an hour and fifteen minutes, and we didn’t give them time to applaud between songs. It was like shaking up a bottle of Tizer because at the end they all went nuts. It was a bit hard to hang on to reality when it broke. It’s important to me because it’s the first piece of work outside the early singles, up to “My Generation” really, that I could really feel comfortable with the voice. It was that piece of work that made me look inward and express it vocally – much, much more than when I was doing “My Generation”, I was an angry young man, and that’s easy when you’re young, it’s easy to be angry. But then of course Tommy needed so many more emotions and you have to look very deeply inside yourself to bring that out within the words. So Tommy gave me the voice that later got me through those great albums like Who’s Next, Quadrophenia, Live At Leeds.

It’s The Who’s 50th anniversary next year. What are your thoughts about that?
We’re trying to ignore this. It’s just another year for us. You’re talking to a band that never thought it would make it to the end of the week. So who knows? We’ve got no plans at all for next year. And I really mean that. I wish we did, because I could do with The Who at the Albert Hall in March. To me, so what? It’s 50 years. It’s lucky Pete and I are still here. As long as we can still do it, it doesn’t matter if it’s 51 years or 53 years. I’d hate to think it’s all over. But if it is, it’s been a great run. I think Pete and I are playing better than ever, we’re joined at the hip. There’s no reason to stop, and the music hasn’t dated, so why not? But equally, you can’t be on the road all the time.

How’s your album going with Wilko Johnson?
I’m going to do some songs with him. We were desperately trying to find new material, but we just want to get something done in the studio as quick as we can. See if there’s any chemistry, see if we can make something a bit different. I don’t know whether it’ll be any good, I don’t know, it’s going to be a joy to play with, I love him as a man, he’s an absolute treasure, an extraordinary character. I’ve always noted his guitar playing, but always thought there was a lot more there to get out of him. So we’ll see.