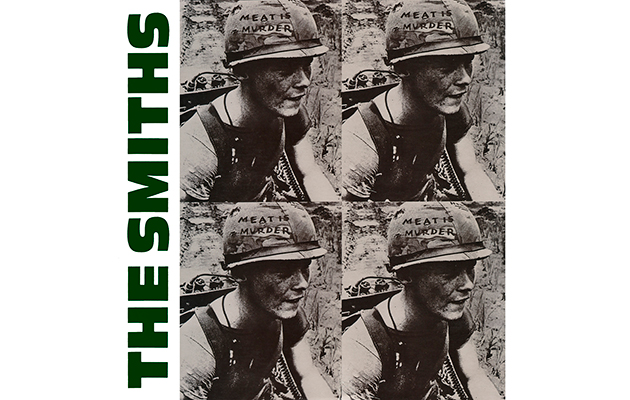 Performed live, “Meat Is Murder” closed the main set on the 1984 tour, positioning the band’s activist agenda at the fore. Backstage, however, Stuart James recalls that there was a slightly more laissez-faire attitude towards maintaining a rigorous vegetarian diet. “Meat was served, but certainly not at our table. Johnny wasn’t interested but Mike and Andy might slip off occasionally for a burger late at night after a gig.”

“For all his faults, Morrissey is often perceived as being dictatorial,” adds Featherstone. “That was never my experience with him. The way this was positioned to the guys was ‘We’re not paying for this; you can spend your money on whatever you want.’ There were many occasions when backstage at gigs, the truck drivers and the bus drivers would pull a barbeque out of the bay of the bus and they’d be cooking up steak and hot dogs, particularly on the US leg of the tour.”

“We used to travel around in a campervan we bought specially for the occasion,” say James’ singer Tim Booth, then a vegetarian, who supported the Smiths on the Meat Is Murder tour. “It was a beautiful old thing from the 1950’s. We lived off lentil stew and rice at those gigs and Morrissey used to come in and eat with us.”

Backstage, the vibes were good. Stuart James remembers Morrissey making the decision to restrict backstage passes to immediate tour personnel only. “We wouldn’t have anyone backstage before shows,” he explains. “I don’t mean just in the dressing room, the whole backstage areas. We’d just have the band and crew laminates. They wouldn’t be given out to anyone else, including record company people, who were always wanting to get backstage to talk to the band. But it wasn’t deemed the right place for them, and I’d be happy with that, as well.”

“We didn’t really have pre-show rituals – usually, it was just people dashing to the toilet,” laughs Andy Rourke. “I know Johnny always used to have this superstition that he had to have money in his pocket when he went onstage.”

The dressing room, meanwhile, was by all accounts a relaxed place. “Mike and Andy were court jesters,” describes Featherstone. “You would see Johnny, always with a guitar in his hand, always with a cigarette burning, perched like a pixie at the end of a couch or a coffee table, strumming on a guitar, having four conversations at once. Morrissey would be more around the peripheries. He wouldn’t actually be in the room when Johnny was smoking. But if he was, he’d be a little more around the edge, watching what was going on, often reading – a little cone of silence around him. Sometimes, he’d completely ignore you. It took a little while to learn that wasn’t personal, it was just kind of the way that he dealt with stuff.”