The Small Faces: Ian McLagan and Kenney Jones tell the story of their singles

The tales behind every one of the band’s historic 45s, including "All Or Nothing", "Itchycoo Park" and "Lazy Sunday" 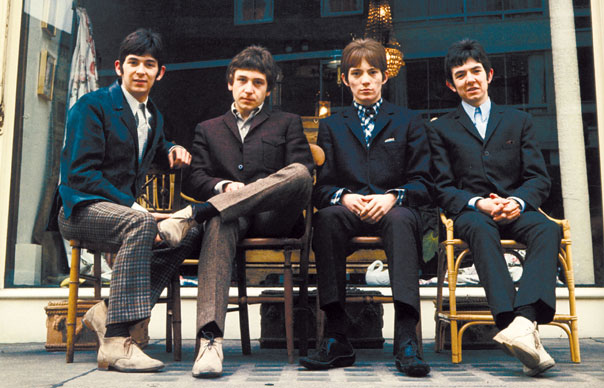 In this piece from the Uncut archives (March 2014, Take 202), McLagan and Kenney Jones reveal the stories behind every one of the band’s historic 45s, and how Ronnie Lane “found beauty in a nettle patch in the East End of London.” Story: Garry Mulholland

Whatcha Gonna Do About It?
Decca, August 1965. UK: 14; US: N/A
Spotted at London’s own Cavern club in Leicester Square by manager Don Arden, the Small Faces sign to Decca. Their debut single – an aspiring soul standard – is written for them.
Kenney Jones: “We recorded it at IBC Studios with Ian Samwell, who wrote the song with Brian Potter. IBC was opposite the BBC at Portland Place. We hadn’t fully established our own songwriting abilities – our stage show was mainly covers of things like Otis Redding’s ‘Shake’ – and this really suited the power of Steve’s voice. The style was very indicative of the time and we loved it. We never set out to be a mod band. We were just young and liked clothes. The feedback was Steve’s idea; he was pissing about in front of his old Marshall amp and it sounded lovely, so we kept it. ‘Sammy’ Samwell was charming. He wrote Cliff’s ‘Move It’ and was virtually a member of The Shadows. Did Don Arden spend £12,000 on buying it into the charts? That’s what he told us. Everybody did that at the time, including The Beatles. Probably still do.”

I’ve Got Mine
Decca, November 1965. UK: N/A; US: N/A
Steve Marriott and Ronnie Lane’s first self-penned single. A soulful mid-tempo ballad with a hint of The Kinks’ “See My Friends”, it bombs. Ian McLagan replaces original keyboardist Jimmy Winston.
Jones: “We’d had a hit after being in the business for about five minutes so we thought, ‘Well… we’ve written a song.’ I loved it ’cos it was more expressive on the drums and had this guitar line through a Leslie amp. Stunning. It’s underestimated and still one of my favourite Small Faces songs. But because it wasn’t a hit… that was it. Don Arden said, ‘We can’t afford to have another flop. I’m bringing Kenny Lynch in.’ Plus the film that was meant to promote it, Dateline Diamonds, didn’t come out until months after the single. But we did launch the first ever Transit van. It was some kind of tie-in with Radio Caroline, the film and Ford. This was the first phase of business greed.”
Ian McLagan: “‘I Got Mine’ came out the week I joined. I had to buy a guitar so I could play the part that Jimmy Winston played on the record. I still have that guitar to this day.”

Sha-La-La-La-Lee
Decca, Jan 1966. UK: 3; US: N/A
A charming-but-lightweight Kenny Lynch/Mort Shuman song, this is a big teenybop hit for the band. Lynch also wrote Marriott’s unsuccessful ’63 debut solo single, “Give Her My Regards”.
Jones: “This is where Don Arden steered us towards being a pop band when we wanted to be an experimental band, more like Booker T & The MG’s and The Yardbirds. It was stifling and we never entirely lost that pop idol thing. We recorded this at the Decca studios in West Hampstead. I was getting into the song and Kenny Lynch came over the tannoy: ‘Don’t play anything you can’t mime to!’ He’s the one singing the high harmonies on the chorus. We got along with him, though. Kenny was Jack-the-lad and I still see him as often as I can.”
McLagan: “I’d joined an R’n’B/soul band and almost immediately we’d become a pop group. The kids coming to our shows became mostly little girls.”