The return of The Aphex Twin, and Caustic Window

Last year, Warp Records embarked on a campaign for Boards Of Canada's "Tomorrow's Harvest" comeback that was notable for its obtuseness. Unmarked 12-inches were hidden in record stores, strings of numbers and inexplicable broadcasts were strewn enigmatically across the internet. At one point, I recall some talk of red moons and feverish online triangulations pointing to a bookshop near Edinburgh as the centre of the universe. It was all fun, and the album at the end of it all was great, but perhaps it wandered a little off course as it went on. 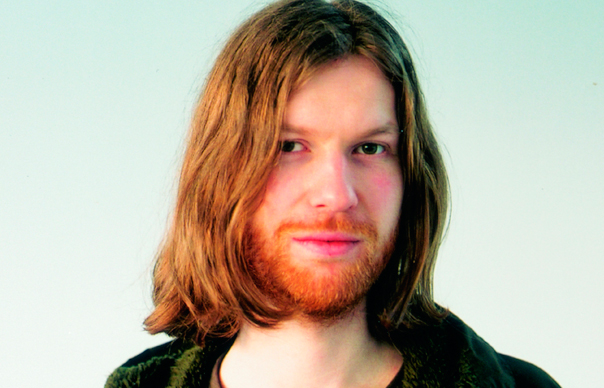 Last year, Warp Records embarked on a campaign for Boards Of Canada’s “Tomorrow’s Harvest” comeback that was notable for its obtuseness. Unmarked 12-inches were hidden in record stores, strings of numbers and inexplicable broadcasts were strewn enigmatically across the internet. At one point, I recall some talk of red moons and feverish online triangulations pointing to a bookshop near Edinburgh as the centre of the universe. It was all fun, and the album at the end of it all was great, but perhaps it wandered a little off course as it went on.

This year, to herald what very much looks, at time of writing, to be the first new Aphex Twin album in 14 years, they’ve done something similarly clandestine, but moved to a conclusion of sorts a lot quicker. If you missed the odd news over the weekend, a blimp bearing the Aphex logo flew over London at the weekend, with the image repeated as stencilled graffiti in New York. Yesterday, on his 43rd birthday, Richard James tweeted a link to a site on the dark web inaccessible to at least some of us.

Thankfully, a fair proportion of Aphex fans are a lot more computer-literate than I am: the site reveals a title – “Syro” – and what’s almost certainly a tracklisting (lots of shouts for “Syro u473t8+e (Piezoluminescence Mix)” at his next DJ set, I’m sure). An image of Richard James’ face – distorted, as usual – was also embedded in the code.

This is all big news, of course, for anyone with even a passing interest in the electronic music of the past 25 years. James, though, is one of those artists who transcends the parameters of his genre – or at least he did, the last time we heard any official new music from him. A couple or so months ago, when this whole wave of activity was bizarrely ushered in by a lost Aphex album from the early ’90s – credited to Caustic Window – turning up first on eBay, then on Youtube, I wrote something which addressed this for Uncut. I even, with perhaps weary contractual inevitability, managed to shoehorn in a Neil Young reference

Today seems a good day to post the piece on this blog, anyhow. In a few hours or so, maybe we’ll have a clearer picture of what’s going on. In the meantime, it’s exciting to ask the tantalising question once again: what, exactly, is Richard James up to? And why now?


Back in the days when The Aphex Twin was a sort of pop star, or at least a regular in the pages of NME, he would say roughly the same thing in each interview he conducted. “I don’t actually like sharing my music with anyone,” he claimed, typically, in 2001. “I’d rather not release it. All these tracks are like your babies, and you have to share them. Suddenly everyone else can listen to them and it’s really horrible.”

“No-one but you will ever hear all your tracks, will they?” wondered Piers Martin, the journalist.

“Probably not. I don’t reckon. Not unless they nick them.”

In 2001, Richard D James released “Drukqs”, his last album to date as The Aphex Twin, and told Martin that anyone hacking his computer would only be able to find there a fraction of his unreleased tracks– “A few hundred,” he estimated.

Up until this summer, that trifling few hundred included the 15 pieces on “Caustic Window”, a fabled set that James decided not to release in 1994. The Aphex archive of notionally lost albums might provide a techno analogue to the unreleased haul of Neil Young. But, for all of Young’s contrariness, it’s hard to imagine the likes of “Homegrown” or “Chrome Dreams” emerging the same way as Caustic Window.

Earlier this year, a white label of the double album appeared on eBay, and was bought by a consortium of Aphex fans for around £40,000. With the co-operation of James and his label, Rephlex, each fan received a digital copy of “Caustic Window”, and the entire set was posted on Youtube. The physical records have now been auctioned again, for £27,198: their new owner is Markus ‘Notch’ Persson, creator of the online gaming phenomenon, Minecraft.

James’ motivations here remain obtuse. It’s tempting, as a consequence, to see the whole operation as one more prank, another riddle to engage and infuriate the obsessives poring over 12-inches that might just conceivably be his work (was he The Tuss in 2007, for instance?). Perhaps James’ long-time refusal to let go of excellent albums like “Caustic Window” frustrates him as well, with only stubborn pride preventing a release by conventional means?

The traditional narrative around James paints him as a mad genius operating in a vacuum, an artist whose radical aesthetic places him outside of the musical continuum. “Caustic Window”, though, tells a slightly different story – of a young musician embedded in the electronica scene of the late ‘80s and early ‘90s, putting his own spin on the sound. The embryonically charming “Squidge In The Fridge”, for example, features the sort of cheesy piano line that anchored numerous Italo House records at the time, while “Mumbly”, with its Dastardly & Muttley samples and cranking breaks, isn’t so far from The Prodigy’s formative work.

Nevertheless, a more recognisable Aphex Twin emerges on dystopian rave anthems like “Stomper 101mod Detunekik” and “Revpok”. For all the creepiness of his music and visuals, James’ agenda has never really involved anything more sinister than a little light perversity. At a time when he was held up as the exemplar of a genre called Intelligent Dance Music, it was his sense of mischief – not occultism – that debunked chin-stroking theory. So “Caustic Window”, like the “Surfing On Sine Waves” album he released as Polygon Window in 1993, is hyperactive and hedonistic, even as James threads the most serene of melodies through the melée.

That capacity for prettiness peaks on “101 Rainbows (Ambient Mix)”, a series of stately arpeggios pitched somewhere between Kraftwerk’s “Europe Endless” and Cluster’s “Sowiesoso”. It is followed, though, by “Phlaps” and the particularly flavoursome “Cunt”, two precursors of the kinetic, malfunctioning aggro-acid James would eventually codify as drill’n’bass. Significantly, they are the only two tracks he released at the time, on compilation albums.

“Cunt” is the last tune on “Caustic Window”, but it’s followed by a pair of “Phone Pranks”, in which James rings two techno contemporaries simultaneously on two phones. A confused chat between Scanner and Mixmaster Morris is interrupted by James ordering them not to hang up: “If you do do, you’ll die.” A second, between Cylob and Mike “Muziq” Paradinas, sees James busted. “Oh it’s Richard, is it? Very funny,” deadpans Paradinas, with the weariness of a friend perhaps overfamiliar with such larks.

For here is a man not averse to playing moderately cruel tricks on his friends. Who told the NME in 1997 that releasing music was “too boring,” and that he found his fans “pretty fucking amusing”. Who has two more unreleased albums – “Analogue Bubblebath 5” (1995) and “Melodies From Mars” (1999) – being auctioned on eBay at time of writing. Whose whole career could be construed, like Caustic Window, as an accidental revolution: a private joke that got magnificently out of hand.