The Making Of… The Raconteurs’ Steady As She Goes

As Jack White’s second solo album, Lazaretto, is released on Monday (June 10), it seemed time to check out some of the White pieces in our archive. Here, in this article from December 2006’s Uncut (Take 115), Jack, Brendan Benson and Patrick Keeler celebrate the irresistible rise of their three-minute garage pop classic. Interview: Barney Hoskyns 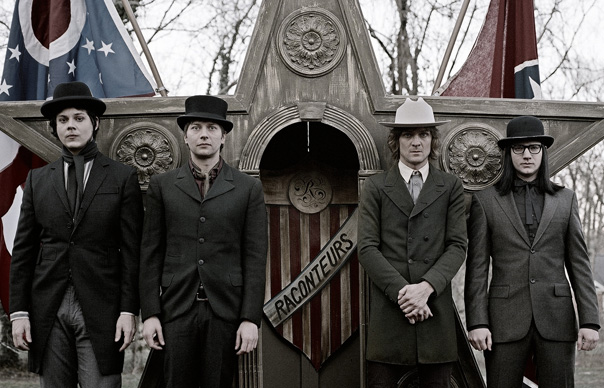 As Jack White’s second solo album, Lazaretto, is released on Monday (June 10), it seemed time to check out some of the White pieces in our archive. Here, in this article from December 2006’s Uncut (Take 115), Jack, Brendan Benson and Patrick Keeler celebrate the irresistible rise of their three-minute garage pop classic. Interview: Barney Hoskyns

If ever a record begged to be released on 7” vinyl it was The Raconteurs’ “Steady As She Goes”. Redolent of an era when singles not only counted, but jumped out of the speakers, grabbing you by the lapels of your ratty post-punk jacket, the debut by Jack White’s other band was an instant masterpiece of 21st-century garage rock.

If its four-chord sequence was hardly revolutionary, “Steady” was anthemic, slashingly exciting, even latently funky. The fact that it embraced the quiet life, the idea of settling down in a state of matrimonial monogamy, paradoxically made the song more thrilling. Inimitable White lines like “Your friends have shown a kink in the single life/You’ve had too much to think, now you need a wife” were priceless antidotes to the rebellion-by-numbers themes of so many young rock bands.

For White Stripes fans, any fears that White’s radical blues-rock primitivism would be compromised by The Raconteurs’ orthodox lineup were allayed within 30 seconds. Hearing that first stabbed chord, you knew everything was going to be OK. And when the classy Broken Boy Soldiers album followed on the single’s heels, it was clear The Raconteurs were more than a busman’s holiday.

As they come to the close of 2006, The Raconteurs themselves remain pleasantly astonished by what happened the day Jack White dropped by Brendan Benson’s house on Detroit’s East Grand Boulevard.

“We were making the second video for ‘Steady’, racing these soapbox cars down a hill,” says White. “Brendan came to a stop beside me, turned to me laughing and said, ‘Did you ever imagine when we were writing this song that it would lead to this?’”

Jack White (vocals, guitar): Brendan only lived three blocks away from me, so I would stop by quite often just to say hey and what’s going on. Brendan said, “Jack, please help me write some lyrics, ’coz I’m all tapped out!” He played me the demo of “Steady As She Goes” that he’d done, which he’d played all the instruments on. It was like a slow reggae version, a lot slower, and he only had one line, “Find yourself a girl and settle down…” So I just took his book and started writing.

At first I thought it was funny, because Brendan’s always trying to find the beauty in the clichéd phrases and sometimes he catches flak for that. So I was trying to do my best, Brendan! I think the big notion in my head was we’re all getting older now and enough of goofing around. All our friends are musicians, so it was like, ‘How much of this world can we stay a part of and how much do we reject?’

The song changed identity when Patrick [Keeler, drummer] and Little Jack [Lawrence, bassist] showed up a few days later. They happened to be in town, so we said, “You guys should come over and play on this.”

The best part of “Steady” is that it was the first time the four of us ever recorded together. People always say, ‘God, my demos sounded so much better than my album.’ I mean, it was great to be in Brendan’s attic, where it was 120 degrees and we wanted to get the hell out of there. Most of The White Stripes’ albums are recorded in really harsh conditions in the dead of winter, and that’s the best way to record, because when you get comfortable you start messing it up.

We thought it was a good blessing for the band to start off on vinyl. The song sounded so immediate that it just felt right. Life since the single came out has been amazing. The band has changed so much since then and it hasn’t even been that long.

I have to honestly say that I’m divided totally 50/50 between The Raconteurs and The White Stripes. My brain now has two options for songs that I write, and it’s a really nice luxury to have as a songwriter. I have so many songs now for another White Stripes record: Meg and I are working on songs during the breaks from touring with The Raconteurs.

But this band is making me a much better guitar player. I’ve taken a 10-year-leap in terms of guitar playing, because in the White Stripes I didn’t have time to explore – I had to keep going back to rhythm guitar to keep the show going.

Brendan Benson (vocals, guitar): I remember writing the main part of “Steady As She Goes” and recording a little demo on a little tape recorder. All it was, was “Find yourself a girl, find yourself a girl…”, just the same line over and over again. And then Jack came by the house and I played it for him. He liked it and we just started writing, as he does. He’s good at that, and he just finished the lyric.

The theme of settling down is kind of an ongoing discussion with myself. I haven’t really figured it out or come to any conclusions. It’s kind of an age-old topic. Jack’s approach was a little different, and I didn’t quite understand it at first. He came up with the phrase “Steady, as she goes” and I thought, “Yeah, that’s cool.” I never questioned the phrase ‘kink in the single life’ and I didn’t think about it too much because I guess I was so preoccupied with other things – just the fact that we were writing together.

The cool thing about The Raconteurs is that there are two approaches to the music. It’s like the duality of man, yin and yang, devil and angel. And I think this song is like that, too. I don’t always understand Jack’s part in it and he probably doesn’t always understand my part in it. What I like most about songwriting is sneaking an idea in where it doesn’t belong. A bunch of kids jumping up and down singing ‘Steady, as she goes!’ – if you think about it, it’s kind of ironic.

It’s debatable when the birth of The Raconteurs was. We wrote “Steady” but then we wrote “Broken Boy Soldier”, I think, on the same day. It all happened without talking, almost – screwing around, having fun.

Everything was done so fast. “Steady As She Goes” is an early take, if not the first take. Jack was like, “Okay, cool, I thought that was great.” I was like, “Wait, were we recording?”

Patrick Keeler (drums): Brendan and Jack just wrote the song to write it – they weren’t trying to make an album or anything. I heard it in Jack’s car when he played it for me, like, “Check out what me and Brendan made.” Little Jack and I were coming up anyway to record some demos with Brendan, so we all four happened to be in town at the same time. So we recorded that song. We kind of changed it up a little bit, making it more rocking.

It probably took five or six songs before we realised we were making a record. So we started naming songs and then started naming our band. We stopped around 10 songs because we figured we could’ve just gone on and on.

We’ve been really lucky with the people that come out to the shows, like the very first show in Liverpool in March. We’ve done nine or ten festivals over the summer, and the response has been great.

We’ve been writing the whole time for a new record. There was no problem with coming up with new songs; the hardest part was to stop! So I think we’re all excited about getting back into the studio.