The Making Of… Hawkwind’s Silver Machine

With Hawkwind and Motörhead both touring the UK this month (November 2013), we take a look at the story of the only Top Three single ever recorded entirely on LSD. Lemmy, Dave Brock, Nik Turner and more tell the tale of “Silver Machine”: drugs, insanity and a “Chuck Berry riff played backwards”… From Uncut's September 2007 issue (Take 124). Interview: Paul Moody __________________ 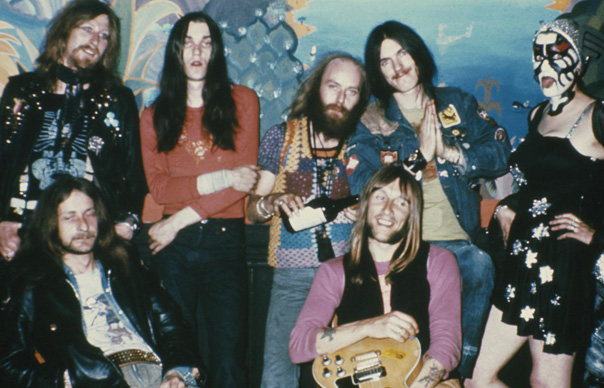 With Hawkwind and Motörhead both touring the UK this month (November 2013), we take a look at the story of the only Top Three single ever recorded entirely on LSD. Lemmy, Dave Brock, Nik Turner and more tell the tale of “Silver Machine”: drugs, insanity and a “Chuck Berry riff played backwards”… From Uncut’s September 2007 issue (Take 124). Interview: Paul Moody

The year was 1970. The greatest decade in the history of mankind was at an end and, as Danny the Dealer pointed out in Withnail And I, London was a city experiencing a serious comedown. With Brian Jones, Janis Joplin and Jimi Hendrix dead and the horrors of Altamont still fresh in the memory, British rock was at a crossroads – torn between the space-age stomp of glam and the primordial throb of heavy metal.

The perfect environment, then, for Hawkwind. Formed as Group X in Notting Hill in 1969, their proto-punk racket and play-anywhere ethos attracted an army of disaffected longhairs, inspired by their intensity and zero-bullshit attitude. “They looked like a bunch of spacemen who had been on a ship for a thousand years and gone completely wacko,” recalled novelist Michael Moorcock of the band in full flight.

But it wasn’t until February 1972 that they recorded their anthem. Written by guitarist Dave Brock and resident “space poet” Robert Calvert, “Silver Machine” was an unearthly onslaught of overdriven guitars, oscillating synths and blistering bass, which sounded like a distress message from a distant universe.

The lyrics, a sci-fi fantasy full of lines like “It’s an electric line/To your zodiac sign”, and about either a bicycle, a spacecraft or a hypodermic syringe depending on who you talk to, ripped up the rule book, and reflected band interests ranging from Eagle comic’s Dan Dare to French thinker Alfred Jarry. Denied the No 1 spot by Alice Cooper’s “School’s Out” and Rod Stewart’s “You Wear It Well”, “Silver Machine” has since sold over a million copies, and become a stone-cold classic covered by everyone from The Sex Pistols to, most recently, Jarvis Cocker.

Not that Hawkwind’s sudden success went unnoticed by the powers-that-be. “After we had a hit we were busted everywhere we went,” laughs manager Doug Smith. “I don’t think they liked the fact this bunch of long-haired reprobates on drugs were influencing the way young people thought.” Too late, Mr Man – with “Silver Machine” Hawkwind had already, metaphorically at least, put acid in the water supply…

Dave Brock (co-writer/guitar): “Silver Machine” was recorded at The Greasy Truckers Ball at the Roundhouse in Camden on a Sunday night in February 1972. During the afternoon we all took LSD in the dressing room. As we were sitting there, someone said it was time to get on stage. We were all completely off our heads, but once we got started it was OK. We’d done so many gigs by then, it was easy. When we listened back to the tapes, we realised Bob Calvert’s vocals didn’t sound right, so we went into Morgan Studios to finish it off. We all had a go at singing it, but none of us could hit the notes, until Lemmy had a go and it worked.

Bob Calvert wrote the words. He put them to a riff I’d come up with when I was living in Putney. He was one of the earliest alternative types, heavily into science fiction, a real free-thinker. Everyone thinks “Silver Machine” is some sort of sci-fi epic, but in actual fact it was a send-up – it was about a bicycle! He was very good at conjuring up images which would stick in your head – “Silver Machine” was one of those, where the music and the riff fitted perfectly.

Once it had sold a million copies, they rolled out the red carpet for us. We stuck to our guns, though. We refused to mime on Top Of The Pops. As a compromise, they came and filmed us in Dunstable, instead. They only had one camera so we had to do it twice. If you look at the footage you can see that we’re wearing different stuff in every shot!

I must admit I was pissed off it didn’t get to No 1. It did in some charts, but not the proper one. Everything else around – Donny Osmond, David Cassidy – was just a joke. One of the songs that kept us off the top of the charts was “School’s Out”. I met Alice Cooper later and he said he was a fan, which made me feel a bit better about it. At the time it felt like a major breakthrough – we’d been slogging for years, and it gave us the confidence and the finance to do Space Ritual (1973). We still play it on special occasions. We’re going on tour to South America soon – we’ll probably play it then!

Lemmy (vocals/bass): The night we recorded “Silver Machine” we were all absolutely destroyed on dope. Me and Dikmik especially. When it was time to go on, the two of us were stiff as boards [laughs]. They put my bass round my neck and literally pushed me on stage. I had two questions: “Which direction is the audience?” and “How many paces away are they?” They told me 10 paces, so I walked forward five and started playing.

But once the music started, we were electric. We never talked much, but me and Dave Brock had this weird chemistry on stage that I’ve never experienced since. We could be looking in completely different directions and we’d still hit the chord change at the same time. It was a weird band like that. No-one even asked me to join, everything went unsaid. There were lots of different factions to do with class and which drugs you were taking. They only let me sing vocals on “Silver Machine” because none of the others could hit the right notes. I had it down in two takes! It’s a great riff – I think Dave called it a Chuck Berry riff played backwards. When it was a big hit, they didn’t like it because I was getting all the attention.

I thought it was a bit rich when they finally kicked me out in Toronto. I said: “You can’t fire me, motherfucker, because you never even hired me!” [laughs] I loved being in Hawkwind, though. It was like Star Trek with long hair and drugs. If they hadn’t kicked me out, I would never have left.”

Doug Smith (manager): I remember going to a gig in Northampton and the band had just got a new drummer, Simon King, who could really play. That night they did an incredible version of “Silver Machine”, which got a really big ovation. In the van back to London, I told them it had to be the single. The band couldn’t see it.

At the gig itself, the band were completely out of their heads. There was a power cut at 9.30, so you had 2000 hippies sitting outside the Roundhouse. Naturally this attracted a lot of attention. So by the time they re-opened the doors there were at least another thousand people in there. Robert Calvert was completely manic that night. He wasn’t wacko, but he was a manic depressive and, as I recall, he ended up in Roehampton psychiatric hospital on a 28-day section when the time came to re-do the vocals. A great shame.

In the end, of course, Lemmy’s vocal made it work. He looked and acted exactly like Hawkwind’s audience. Long hair, jeans, a real anti-authority attitude. The Hell’s Angels related to him – with Lemmy singing, it became a rebel song.

Nik Turner (saxophone): Hawkwind were the people’s band. We had grass-roots support because we’d played every free festival that would have us. “Silver Machine” was just the point where that crossed over into the mainstream. The band was about expressing ideas rather than technical ability – we left that to Pink Floyd.

Bob Calvert’s lyrics were deliberately ambiguous. I’d known him from when we were still living in Ramsgate, and we discussed lots of ideas about exploring inner and outer space. The song was about a silver machine, but it could have been anything – a spaceship, a motorbike, a hypodermic needle, anything which gives you freedom.

It was a real pleasure when it did so well, but we took it in our stride. We weren’t egotistical pop stars. Hawkwind in those days was almost an anti-band – we had no interest in stardom. We just enjoyed playing. That was the difference between Hawkwind and The Sex Pistols. Hawkwind were outrageous, but we weren’t calculating like they were. We didn’t have a master manipulator like Malcolm McLaren. As soon as “Silver Machine” became a hit we started getting some good offers. I remember Frank Zappa was playing at the Oval, and he couldn’t sell any tickets, so he asked us to play. The place sold out in five minutes flat.

I’m always pleased when it gets reissued. It’s become a classic, it’s stayed the course. It’s probably still on most pub jukeboxes from when it was first put there!

Dave Robinson (promoter, Greasy Truckers Ball): I was managing Brinsley Schwarz at the time, and we did this benefit for The Greasy Truckers. Totally sold out. There were four bands on – Magic Michael, Man, the Brinsleys and Hawkwind. I was recording the gig using a mobile studio. Musically, Hawkwind were a bit off –
wild and woolly. But the rhythm track was great. It was obvious that “Silver Machine” had something, so I did a rough mix of it and then handed over the multi-track to them – this was before Lemmy sang the vocals. That was the last of my involvement.

I saw Nik Turner in Wales a few years ago and we talked about it. It’s all a bit of a haze to be honest – like they say, if you remember the ’60s you weren’t there. But “Silver Machine” was an incredible success, which I still think is remarkable. Whenever you would meet Hawkwind they would be totally out of it. They wouldn’t know what day it was or which building they were in, but they’d always be really friendly. A lot of people were faking it in those days, but Hawkwind were the real deal.