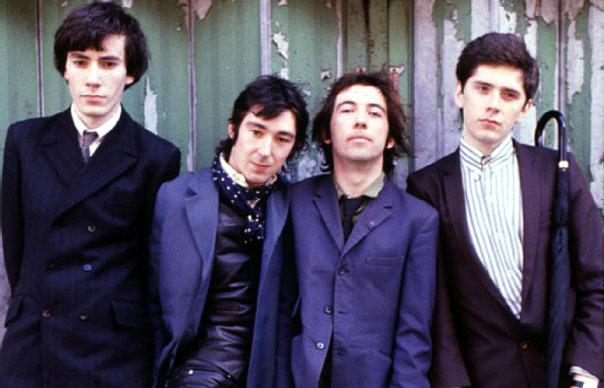 We have other great songs,” says Pete Shelley of ‘Ever Fallen In Love (With Someone You Shouldn’t’ve)’, “but this is the one the man on the Clapham omnibus would recognise.”

You can certainly argue that, 30 years on from its release, Buzzcocks’ “Ever Fallen In Love…” remains a two-minute 42-second high-water mark of punk. Although sticking to the genre’s template of buzzsaw guitars and snarky vocals, it’s shot through with a heavily melodic hookline that’s been highly adaptable, as wildly varying covers by Fine Young Cannibals, Thea Gilmore and Jeff Tweedy have proved.

Inspired by a line from Guys And Dolls, and written in a van parked outside a post office in Edinburgh, it was one of the elite 142 seven-inch records kept in a 2ft-long wooden box that constituted the crown jewels in John Peel’s record collection. And it should be in yours, too.

Pete Shelley (vocals, guitar, songwriter): We were in the Blenheim guesthouse, Blenheim Place, Edinburgh, on our first headline tour, following the release of “Orgasm Addict”. Barry Adamson was playing bass; Steve Garvey didn’t join until the end of the tour. We’d done the White Riot tour [with The Clash, Subway Sect and The Slits], but now we were on United Artists it all felt very modern. I’d written songs before I met Howard Devoto. It was pretty easy: he’d write the lyrics and I’d do the music. Then, when he left, I had to finish them off. So I always had my ear out for lyrics. Guys And Dolls was on the TV and there’s a line: “Have you ever fallen in love with someone you shouldn’t have? Just wait ’til it happens to you.”

I thought it was a wonderful phrase, and the next day, parked outside the post office in Edinburgh, I started writing the song. The opening line was originally “You piss on my natural emotions”, but because “Orgasm Addict” hadn’t been getting radio play because of its title, I needed something a bit subtler. So I came up with “spurn”. It had the same sort of disregard, but wasn’t as likely to offend! Of course it’s from personal experience – I tend to write songs to get my own back and turn the knife, but some details are changed to protect the innocent, and it also helps make them more universal.

The producer, Martin Rushent, was a very good facilitator. When it came time to do the vocals, the entire band went shopping with their significant others, leaving the donkeywork to Martin and me. We’d done them all by the time they came back. The great thing about Martin was there was none of this “It’ll be all right in the mix” stuff other producers give you. He mixed as he went along and made everything sound great – when he’d woven those three-part harmonies together, that’s when everyone realised this was going to be huge. It leapt out of the speakers.

In 2005, I went into the studio for the first day of re-recording the song for the John Peel tribute. It was pretty chaotic – a lot of the contributions were done by international link. But one thing I was pleased about was that it demonstrated how much the song still stands up – people don’t necessarily equate punk with what you’d call classic songwriting. Peel himself had meant a lot to me growing up. It was on his show where I first heard Can, and he was brave enough to stop playing Tangerine Dream in favour of The Undertones, always open to new music. It was a real honour that his family chose “Ever Fallen In Love…” to celebrate his memory.

Steve Diggle (guitar): It was a whirlwind time for us. The punk rock atom had been split open. Our songwriting came to the fore. A lot of bands were just there for the party, but the ones that had the material lived on. There was competition between Pete and I. We’re completely different people, polar opposites in some ways. I damaged my foot on a bike years ago so I always used to say to Pete, if you’re Shelley I must be Byron because I’ve got a bad ankle. That was more my thing – drink, drugs women and reading poetry – I never had the problems with love affairs that he seemed to.

We’d go to a rehearsal room in Manchester when we got off tour and run through batches of songs really quickly – in time to get to the pub at five o’clock. You could hear other bands still running through an intro in the room next door by the time we’d done three or four songs! The magic and power of our band was that we had so much great material.

“Ever Fallen In Love” didn’t particularly stand out – whatever other songs we were doing at the time were just as good, I think. It’s certainly not as great as “Harmony In My Head”. A lot of punters will say that “Ever Fallen…” is just a love song, whereas “Harmony…” is inspired by James Joyce, it has cinematic images. That’s my preference.

I guess that song’s been a blessing and a burden. People pigeonhole us by it, but in truth, we wrote about the whole spectrum of the human condition. I was on holiday when they cut the Peel tribute. But even with all those people it didn’t make a blind bit of difference. Elton John, Robert Plant, Dave Gilmour – it was great to have them on it, but the essence of the thing comes from the heart and soul of what we were doing. Too many ’Cocks spoil the broth.

Richard Boon (manager): Howard and I were old school friends. I was at art school at Reading when he and Pete came down to see the Pistols in London. I moved back to Manchester when they formed a band, my job being to create a project, make something happen. When Howard left, Pete’s brand of doomed romanticism got foregrounded, and their sound became poppier. “Ever Fallen…” was part of that development. The long-term project was to move, quite deliberately, from punk to pop, in a more commercial direction. The universality of the lyric was a big attraction. There was a feeling that Pete had written it about Linder Sterling, who had done the ‘iron maiden’ collage for the “Orgasm Addict” cover. Pete was coming out of a problematic personal relationship and looking at Howard and Linder, who were an item at the time, but it was never directly articulated. I was very fond of the sleeve – it was based on a collage by Marcel Duchamp. I really liked getting Duchamp into the Top 20!

Martin Rushent (producer): I’d just got myself a new job as an A&R at United Artists under Andrew Lauder when he played me the “Spiral Scratch” EP. I went to see them and knew we had to do them straight away – it sounded like they had an endless string of number ones.

We cracked the formula to record them very early on – drummer on a riser, the band all around him – just like they were onstage, playing as they did live. We got off to a false start with “Orgasm Addict” because we used a small room – TW Studios in Fulham. The Buzzcocks needed a big acoustic; their whole sound was about reverberating noise, so the guitars could blur and spin together. Compared to everything we did afterwards, “Orgasm Addict” sounds shit. As soon as we went to Olympic studios in Barnes, where the Stones, Beatles and Zeppelin had done a lot of recording, we knew it was where they belonged.

Pete played me “Ever Fallen In Love…” there for the first time and my jaw hit the floor. I felt it was the strongest song that they had written – clever, witty lyrics, great hooklines.

I suggested backing vocals – to highlight the chorus and make it even more powerful. No-one could hit the high part – so I did it. I’d sung in bands in my youth and I also worked as a backing singer.

Pete and Steve had a finely worked-out guitar style – their tunings were a tiny bit out, just enough to swirl when they met in mid air.