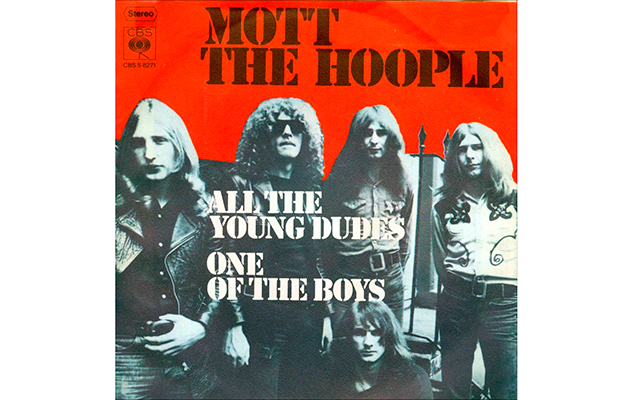 DALE GRIFFIN [drums]
When we went to Zurich it was like the Dawn Of The Dead, bloody awful. But it was just the latest in a long line of break ups – we always came back from the brink. Pete Watts was a fan of both Bowie and Mick Ronson and they began communicating with each other. Bowie was a breath of fresh air in the studio – he knew exactly what he wanted, but he was also very easy going, great with people. Everything he did worked, and worked very well. He really understood musicians.

We used to sit in the studio watching him, it was fascinating because the recording we’d done before then was with Guy Stevens and he was heading in a dangerous direction, breaking and smashing things. Mott were one of the things he was going to smash. He was having mental problems, very sad.

The weird thing is “… Dudes” ruined Mott The Hoople. We had a massive fanbase and as soon as they heard “… Dudes”, all those fans went away. It completely buggered us for a while. Having a hit record was a tremendous boost for us – we went from losers to being a band that was going somewhere.

It affected Ian. He was doing slightly cod Bob Dylan things that we’d been getting away with for sometime, and one of Bowie’s suggestions was he didn’t do that anymore. In America we stayed at the Riot House but we didn’t party like Zeppelin – Lee and Zee would have killed us if we had. Those two were fantastic people from Bowie’s crowd, really great fun.

It was very difficult for four members who wanted to get songs in. But really only Ian was writing them. I think Ian ended up wanting to get some people out of the band. I think he’d liked to have got me out because he never wanted me in, he thought I was shit. Also, he forced Ronno on us, Mick wouldn’t speak to us which caused a lot of bad feeling. You can’t continue a band that way, it had to end.

DAVID BOWIE [producer]
Interviewed in NME 1972:
They [Mott] were so down when I first met them. Oh, everything was wrong. Everything was terrible, and because they were so down, I thought I was gonna have to contribute a lot of material. Now, they’re in a wave of optimism and they’ve written everything on the album bar one Lou Reed number and the ‘Dudes’ single I did for them. The album is fabulous. They’ve never written better stuff. They were being led into so many directions, because of general apathy with their management and recording company. Everybody was very excited about them when they first came out and then, because they didn’t click immediately, it fell away. When I first saw them, I couldn’t believe that a band so full of integrity and a really naive exuberance could command such enormous following and not be talked about. The reactions at their concerts were superb, and it’s sad that nothing was done about them. They were breaking up, I mean, they broke up for three days and I caught them just in time and put them together again, cause in fact all the kids love them.