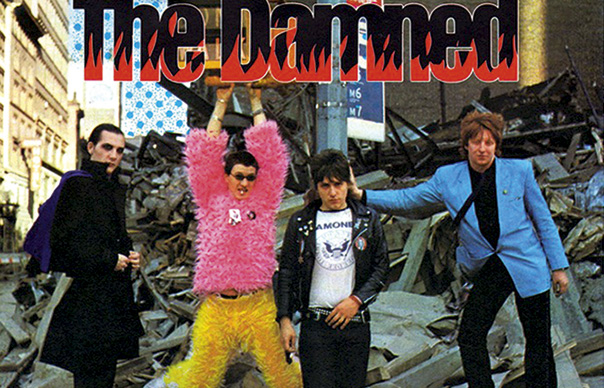 When The Damned reformed in January 1979, after a nine-month break following the departure of original guitarist Brian James, nobody knew quite what to expect. James had been the band’s principal songwriter on their two albums to date, and it was unclear who from within the band’s ranks could replace him. Recruiting ex-Saint Algy Ward on bass (Lemmy had briefly held the job), the band signed to Roger Armstrong’s Chiswick Records, and were sent to a Croydon studio for a couple of weeks and told to “make some noise”, as Ward remembers. The results were impressive: Captain Sensible’s “Love Song” gave The Damned a Top 20 hit, and he followed it up with the poppy, hippy-baiting “Smash It Up”, which although effectively ignored by the BBC, became a minor hit in winter 1979 and subsequently the band’s unofficial anthem.

For such a simple powerpop song, “Smash It Up” was remarkably complex. For a start, Sensible had conceived it as the second section of a four-part suite, and although the first two sections appeared on 1979s’ Machine Gun Etiquette album, the last two didn’t surface until 2004. And then there was the question of influences. How did a tribute to Marc Bolan – with whom The Damned toured in 1977 – fit in with a song that had lyrics scolding “Krishna burgers” and “Glastonbury hippies”? What did Abba have to do with all this? And just how did The Clash’s grand piano come to be so important? We persuaded Rat, Captain, Algy Ward and Roger Armstrong to spill the beans about Clash-caricaturing condoms, car crashes and frothy lager. David Vanian declined to participate.

CAPTAIN SENSIBLE: I was in a deckchair in my parents’ garden catching up on some sleep when I was awoken by my mum saying, “Your mate, what’s his name, Roley, Boley? He’s died in a car crash.” I hoped she didn’t mean Marc Bolan.

RAT SCABIES: We’d just been on tour with Marc. He looked after us. He was really good on the technical side of sound. I’m pretty sure he would have ended up producing us.

SENSIBLE: I locked myself in my room and picked up the guitar. The sad Part 1 of “Smash It Up” pretty much wrote itself and is a tribute to Marc. While other old-guard rockers like [Phil] Collins and [Keith] Richards loathed punk, he actually really dug it.

SCABIES: The day after Bolan died, I was sitting round Captain’s house, plonking around on the guitar and I came up with a few odd chords. Captain went, “Ooh, that sounds good.” And he and I wrote Part 1. That’s the instrumental bit. Captain had a great ear for melody and helped turn Part 1 into a complete thing.

SENSIBLE: It’s all a blur, but I thought Rat’s involvement was more on Part 2. I recall Rat twanging away on the guitar and he came up with a usable riff which became the chorus.