A quick look at eight of my favourite recent releases 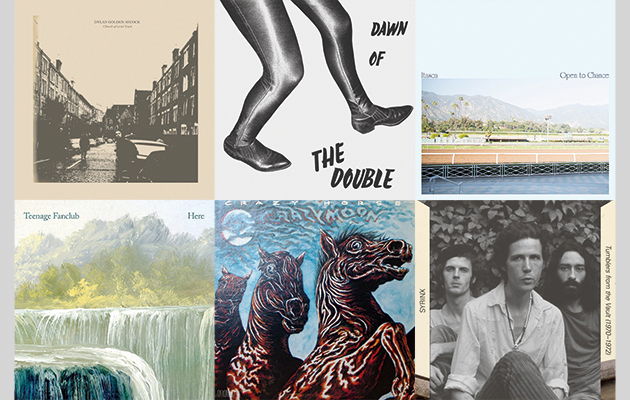 As you’re hopefully aware by now, our excellent new issue of Uncut is in UK shops, with revealing stories on The Specials, Bon Iver, Bob Weir, Peter Hook, the remarkable Shirley Collins and, of course, much, much more. If you’re in the USA, print editions of our first relaunch mag should now be reaching you: it’s the one with David Bowie on the cover, also featuring David Crosby, Margo Price, a hair-raising Lou Reed piece and, yes, lots more besides. Please let us know how you’re feeling about our new look and the changes to Uncut; as ever, we’d be very pleased to hear from you (email uncut_feedback@timeinc.com).

This week, it seems a good time to write a bit about some of my favourite albums of the last month. Teenage Fanclub’s unassuming rock masterclass of “Here”, many of you will already know about, I suspect. There is some sweet irony that no British band of their generation have grown into middle age as gracefully as the one lumbered with that absurdly short-termist name. Nevertheless, the Fanclub’s ninth album proper, and first in six years, might just be their best this millennium; a triangulation of mature soppiness, mitigated contentment and indelible tuneage.

As usual, the three frontmen get four songs each, and Norman Blake sets the tone with the terrific gush of “I’m In Love”. “There is pain in this world,” he notes conscientiously, but “It feels good when you’re close to me/That’s enough.” It’s Gerry Love, though, who ultimately steals the show, with his four songs best exemplifying the “Here” MO of adding a little fuzz and grunge into the twinkling constructs of harmonies and horns: check out the guitar break on the jazzish “The First Sight”. Not “Everything Flows”, exactly, but an endearingly restrained statement of intent.

2016 feels very much like a breakthrough year for the glut of adventurous folk guitarists who’ve been nurtured in the underground these past few years. As William Tyler, Steve Gunn and Ryley Walker gain mainstream kudos, the next tranche of players – Chuck Johnson, Marisa Anderson, Sarah Louise – are moving up a level. Witness Tulsa’s Dylan Golden Aycock, curator of the fine Scissor Tail label (he put out the fantastic Scott Hirsch album earlier this year) and the latest graduate of the Imaginational Anthems comps to assert himself. “Church Of Level” mostly finds Aycock respectfully expanding on Takoma School roots, moving towards the sort of chamber folk compositions mastered by James Blackshaw and Tyler himself, circa “Impossible Truth”. A bustle of drums augment the guitar solipsisms on “Lord It Over”, but the key weapon is subtly deployed pedal steel, giving downhome fingerpicking workouts like “Red Bud Valley II” a pleasing ethereal undercurrent.

Ever thought that “Sister Ray” was maybe a bit on the short side, and could be improved by some heavy Bo Diddley vibes? In that unlikely event, The Double’s debut record will be something of a dream come true, sustaining as it does a kind of elevated boom-chicka-boom drone for two sides and 40-odd minutes. It’s a pleasurable act of endurance to listen to “Dawn Of The Double” and, one assumes, even more of one to play. The pair behind this marathon are, though, serious operators, being drummer Jim White (The Dirty Three, Xylouris White et al) and guitarist Emmett Kelly (The Cairo Gang), who first crossed paths in the rather more nuanced environs of Bonnie ‘Prince’ Billy’s band. The vinyl-only format enhances radical garage-rock credibility, albeit interrupting the brutalist genius of the whole endeavour. How about enlisting a Glenn Branca-style Guitar Army to hammer the point home even more emphatically?

Back in the high summers of acid-folk a decade ago, the calmness exuded by Kayla Cohen in her songs would doubtless be romanticised as in some way uncanny. Nowadays, perhaps fortunately, the sort of candlelit Laurel Canyon fare she purveys as Itasca doesn’t need that kind of witchy qualification; it’s just a lovely collection of songs, in which the serenity of voice and understatement of band create a humane intimacy rather than anything more mystical. Not much happens on the deceptively tranquil “Open To Chance”, even though it presents fractionally fuller instrumentation than on Cohen’s previous underground releases. But the charms of songs like “Henfight” and “Carousel” accumulate steadily, insidiously, over repeat plays. One to file, rewardingly, between Meg Baird and Paradise Of Bachelors labelmates, The Weather Station.

Reissues, now. The fraught business of waiting on Neil Young’s whims must have stymied most chances Crazy Horse had of developing their own career – though, of course, losing the gifted Danny Whitten didn’t help. Nevertheless, the arrival of Frank ‘Poncho’ Sampedro evidently emboldened Ralph Molina and Billy Talbot to have another go, following 1971’s fine, Whitten-fronted “Crazy Horse” and two forgettable sets, featuring radically reconfigured lineups, in 1972. Much of “Crazy Moon”, back on vinyl for the first time in forever, dates from around the same time as the “Zuma” sessions, in 1974, but it would sit on the shelf ’til 1978.

There’s a fair bit to ensnare Neil completists, given his prominent role on five tracks. The strongest is Sampedro’s “Downhill”, a quintessential Crazy Horse trudge with some penetrating Old Black action. Sampedro turns out to be the best songwriter of the trio; his countryish “Too Late Now” is another standout, with roistering piano from Barry Goldberg. Ben Keith and David Briggs also help out and, even if the lyrics don’t reward forensic study (“She’s Hot” and “Dancin’ Lady” being indicative titles), Crazy Moon emerges as an enjoyable reassertion of a band’s core values. A couple of Molina attempts at soft-rock illustrate that a desire to stretch those values is, at best, ill-advised.

For adventurous music fans happy to let labels do their crate-digging for them, the recent market in 1960s and ’70s Ethiopian music has provided a rich seam of new discoveries. As the Ethiopiques compilations on Buda Musique proved, a ravishing party music scene thrived under a censorious dictatorship, harbouring stars like Mahmoud Ahmed, Mulatu Astatke and the local James Brown surrogate, Alemayehu Eshete. Organist Hailu Mergia played with many of these, as part of Swinging Addis’ hottest combo, The Walias, but his music as a bandleader only gained prominence when the Awesome Tapes imprint reissued their Tche Belew (1977) in 2014. Mergia stayed in America after a Walias tour in 1981, becoming a taxi driver in Washington DC. Slowly, though, the deep riches of his career are being rediscovered.

“Wede Harer Guzo”, a hitherto-unknown cassette from ’78, finds him hooking up with a purportedly hipper group, the Dahlak Band, heading deeper into a kind of chant-laden, Arabic-scale, laidback funk – check how Mergia improvises over a delirious ascending bassline on the stand-out, “Almaz Eyasebkush”. It’s easy to fetishise this sort of music as exotic and obscurantist, but Wede Harer Guzo refutes that tokenism with every wonderful track: better think of it as kin to the likes of Jimmy Smith, Jackie Mittoo, The Upsetters and The Meters.

The story of Syrinx, told on “Tumblers From The Vault (1970-1972)”, is one that tells of how pop, the avant-garde and strong classical aspirations could get in a fruitful tangle on the cusp of the ’70s. John Mills-Cockell, the Canadian band’s leader, had a hinterland in trad rock (his early band, Kensington Market, were produced by Felix Pappalardi at Electric Ladyland). He had also, though, studied electronic music as an academic discipline – a key to understanding Syrinx’s two beguiling albums, collected here. The synth baroque of Wendy Carlos, and Terry Riley’s timelag meditations are useful reference points, but it’s still hard to imagine, at 45 years’ remove, quite how alien “Syrinx” (1970) and “Long Lost Relatives” (1971) must have sounded upon release, given it’s generally easier to compare Mills-Cockell’s music with subsequent electronica.

The self-titled debut is stately and subdued, with a processional glide to the likes of “Chant For Your Dragon King” (as everything here, vocal-free) that pre-empts both Side 2 of Low and the encroaching New Age. “Long Lost Relatives”, meanwhile, is flightier and more whimsical, Doug Pringle’s electronic sax lines often to the fore. The squiggliness can sometimes feel like a conservatoire prank, but Mills-Cockell’s romantically-inclined melodies are ravishing; like an implausible mash-up of Michael Nyman, Arthur Russell and Stereolab.