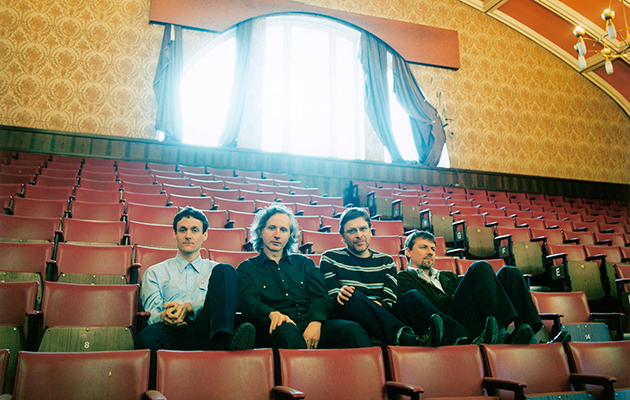 “It’s not as if we live fabulous lives,” says Gerard Love. “We just live normal lives like everyone, so to try and find something you think is worth singing about, and that fits the music, becomes quite difficult.”

Over the past three decades, Teenage Fanclub have made it look easy, though, writing consistently exquisite songs that nod to ’60s sunshine pop and folk-rock as much as they do to the grungier sounds of electric Neil Young. “If it wasn’t difficult, though, everybody would be doing it,” adds Love, “and then you wouldn’t be able to make a living!”

The Fannies are today in the perfect state of mind to look back across their work so far – they’re about to release remastered LP versions of their five Creation records, and are getting ready to rehearse for live shows later this year that will find them performing most of their back catalogue. “There are some songs you like better than others,” says Norman Blake, “and others where you feel you didn’t get there. I don’t think we would ever do anything that was very left-field, though; it just doesn’t make sense for us to do that. The band really is a vehicle for songwriters, so we’re not gonna do a Trans…”

A CATHOLIC EDUCATION
PAPERHOUSE/MATADOR, 1990
The noisier debut album, very much the odd one out

NORMAN BLAKE (guitar, vocals): Teenage Fanclub then was a continuation of what Raymond and I had been doing in The Boy Hairdressers. We’d been around a lot of people trying to get record deals, and we thought, ‘That’s too much like hard work, let’s just make a record.’ Raymond inherited a fridge and an oven, so he sold those, and we bought some studio time, then we realised we had to get a band together.
GERARD LOVE (bass, vocals): I met Norman at a gig in May 1989, and then later on they asked if I’d be interested in joining them to record the album. By mid-July we were in the studio. To this day, I don’t know why they asked me to be in the band. A case of mistaken identity? I think the only thing in their mind was to make an album. I loved the proactive energy they had.
FRANCIS MACDONALD (drums): I’d been in The Boy Hairdressers with Norman and Raymond – I’d always said, “I’m happy to be on the record, but I’ll probably go back to university and finish my studies afterwards.”
BLAKE: We did some recording at a studio in Glasgow called Pet Sounds, run by Wet Wet Wet! Then Francis decided to go back to university, so we were looking for a drummer, and somehow hooked up with Brendan [O’Hare]. So we thought we’d try a few different versions of some of the songs, just to have Brendan involved. At the time, we liked Sonic Youth, and we were listening to Exile On Main Street, which I think you can sort of hear in a lot of the chord shapes. Also Syd Barrett-era Pink Floyd.
RAYMOND McGINLEY (guitar, vocals): Funnily enough, this is the record that we’ve done in the most separated way. I’ve got a memory of Gerry doing all his bass parts one after the other.
MACDONALD: One of the “Heavy Metal” tracks has got a bit of a drum mistake. We listened back, and there was this shrug like, “If you’re not listening for it, you won’t notice it.” I find it quite unlistenable now because that mistake jumps out – but that was the attitude, ‘It’ll be fine.’ They had no funding either, so they were watching the clock.
LOVE: I never get tired of playing “Everything Flows” – it’s solid gold.