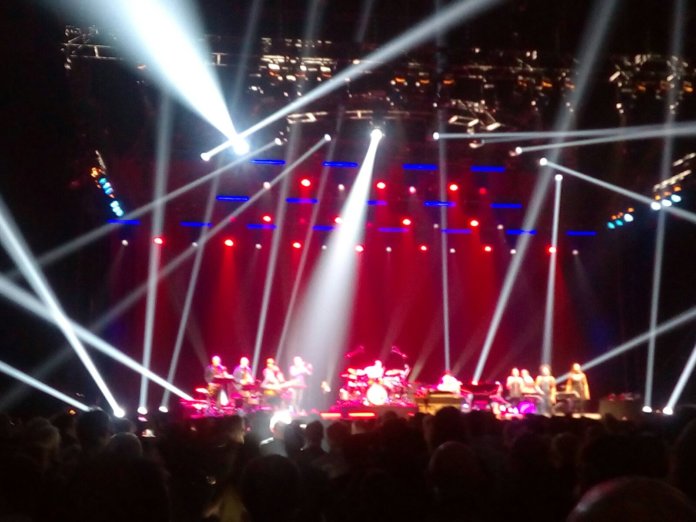 The deceased, one suspects, would not have appreciated sentimentality, and Donald Fagen is not about to dishonour an old friend. “We’re the Steely Dan organisation,” he says. “We’re a little different from what we were a few months ago, but I gotta live with that.” As if to emphasise the change, Fagen launches into “New Frontier”, a song that marked his original liberation from the company of Walter Becker in the early ‘80s. Becker himself, dead eight weeks, is never mentioned. Allusion, irony and a fragile air of emotional detachment remain Steely Dan’s key coping strategies, even as they enter the final phase of their suitably complex career.

“Their career” is something of a misnomer, of course. This is notionally Fagen’s career now, a place where the distinct legacies of Steely Dan and his solo work may begin to elide a little. Many of these exceptional musicians – notably guitarist Jon Herington, drummer Keith Carlock and the trumpeter/arranger Michael Leonhart – have been part of the organisation for over 15 years, belying the idea that a Steely Dan player is only as useful as their last solo. Nevertheless, with Becker gone, Fagen is the only visceral link to the 1970s. Swaying away from his keyboard, head thrown back with an ecstatic note of Ray Charles, he’s a surprisingly dishevelled figure; a slightly goofy cartoon hipster, mooching about the stage with shades and a melodica. The idea of Fagen as rock’s alpha droll technocrat might work in theory, but the reality is pleasingly more human.

As, to a degree, is the music. Like the parallel return of Brian Wilson to the road, the Steely Dan touring project these past 20 years has been dedicated in large part to playing songs on stage that were explicitly designed for the studio. But fixating on an idea of perfection tends to detract from the process of trial, error, error, error, error and chance that went into the creation of records like Aja, and makes these songs into such swinging live entities. At the heart of Steely Dan is a trust in malleable virtuosity, in a matrix of groove and possibilities. It doesn’t matter a huge deal who’s playing tenor saxophone, for instance, as long as they can improvise their way through the rhythmic peaks and troughs of “Aja” itself – as Walt Weiskopf does brilliantly tonight. He may not have quite the measure of Wayne Shorter, but he clearly has a similar understanding of how Steely Dan demand a fiendish balance of discipline and creativity.

While Wilson and his band have worked assiduously at recreating the exact sound of Pet Sounds, Smile et al, Steely Dan effectively work back from the pristine finished songs to something more open-ended. There’s a jazz imperative being reclaimed at these gigs, so that Herington doesn’t try to reconstruct, note for note, the work of Denny Dias, or Skunk Baxter, or Larry Carlton, or Dean Parks, or Hugh McCracken, or Rick Derringer, or even Walter Becker himself (He does stick pretty close to Elliott Randall’s original path on “Reelin’ In The Years”, but the solo is more or less the riff in that instance). When Becker and Fagen auditioned one guitarist after another to play the solo on “Peg” in 1977, they didn’t tell them what to do, exactly. They just left each of them a space to be filled and a musical problem to be solved in the most harmonious way possible; a musical problem, it should be stressed, that Becker and Fagen had no idea how to solve themselves. Herington doesn’t copy Jay Graydon’s successful solution to the “Peg” dilemma, he resolves that dancing, elusive conundrum in his own, highly satisfactory, way.

A better comparison than Brian Wilson might be with The Grateful Dead, weirdly – another band whose sympathies were often closer to jazz than to rock, and who knew that a spirit of improvisation would allow their canon of songs to be endlessly reinvented. Steely Dan never go anywhere as free and chaotic as the Dead, but there are glimpses of how their songs can be stretched and reshaped right from the off, as “Bodhisattva” climaxes with a series of frenzied breakdowns, the four-man horn section stepping out of their discreet formation. It’s a hint of how this music will survive the loss of Becker and, perhaps eventually, Fagen himself – just as the Dead’s music lives on, in myriad valuable configurations, 22 years after the death of Jerry Garcia.

In the meantime, Fagen remains a heroically reluctant frontman, who still manages to avoid singing “Dirty Work” himself (In the predictable absence of David Palmer, that job goes to the Danettes, three female backing singers who smartly reclaim it as a country-soul slow-burner). His voice is a little strained and pinched on “Time Out Of Mind” and “My Old School”, but his apparent joy and engagement seems at odds with the touring curmudgeon he portrayed himself as in his memoir, Eminent Hipsters. There is even an apology for the relative shortness of the set – limited to 90 minutes, it seems, by the fact that Bluesfest have allowed support act The Doobie Brothers to play for nearly as long as Steely Dan themselves.

The relative brevity means that some opportunities are passed up on. “Babylon Sisters”, for a start, could have rolled on in its blithely funky way for another couple of minutes at least, while the intense consistency of Steely Dan’s back catalogue ensures everyone in the crowd will have left thinking of half a dozen or so personal favourites – “King Of The World”, “Through With Buzz”, “Sign In Stranger”, “Two Against Nature”, virtually all the hit singles – that didn’t make the setlist.

It also means that Fagen doesn’t pay explicit tribute to his old partner by singing Becker’s “Book Of Liars” (from his 1994 solo album, 11 Tracks Of Whack), as he has done at recent US shows and in Dublin the previous night. Instead, the poignancy comes from an absence: a neglected mic stand centre stage; the lack of a sardonic foil who always brought out the best, funniest and cruellest of Fagen, in both music and conversation.

You can find poignancy, too, in the details of all the Steely Dan songs about men of a certain age trying to deal, very awkwardly, with the past and with youth. Does Fagen really sing, “It’s hard times befallen the sole survivor,” tonight instead of “sole survivors”, in “Hey Nineteen”? “She thinks I’m crazy,” for sure, “But I’m just growing old…”