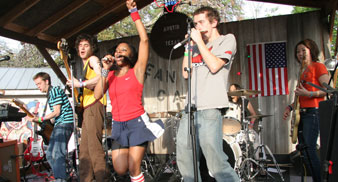 So it’s 10am on Thursday morning, and you find Uncut sat in a packed lecture theatre watching a school choir sing their music teacher’s remarkable composition, “One Good Rock Song Can Change The World”. This Austin equivalent of the Langley Schools Music Project is, ridiculously, the prelude to South By Southwest’s keynote interview: a cosy sit-down with Neil Young and Jonathan Demme, who’s directed Young’s new concert movie.

As is the way with these things, it feels like An Event, but a slightly boring one. Young is droller than you might imagine, but hardly insightful about the songwriting process – they just come to him, apparently. Repeating yourself is “death”, pissing off your audience by trying new things – like Greendale, specifically – is essential. Two small revelations: he’s currently waking up with “distorted crunching noise” in his head, which signals his next album will be a return to Crazy Horse; and he loves “Superwolf, devastating folk metal from Chicago,” by which we assume he means last year’s Will Oldham and Matt Sweeney album. He also sings a bit of “Walk On The Wild Side”, which is sweet.
In the afternoon, it’s Uncut’s own party, held in the backyard of a roadhouse shrine to Johnny Cash. The Belly-ish Like and Vietnam – Southern rockers who look like Devendra Banhart’s bad brothers – open up. Perry Farrell swans in from the Lollapalooza launch to do “Mountain Song”. Drive-By Truckers and the hyperactive, marvellous Go! Team wrap things up. Morrissey would’ve popped in, but didn’t fancy the barbecue, by all accounts.

After that, it’s the nightly glut of surprise gigs and new bands. The Beastie Boys provide Thursday’s biggest draw – so big we can’t actually get in, to be honest. The Flaming Lips apparently play the same show as the previous night, this time for Radio 1. While Morrissey plays for Radio 2 across town, Vancouver’s all-girl fivepiece The Organ provide one of Uncut’s highlights, with their implausibly successful fusion of The Smiths, Blondie and early Cure.

Finally, though, we end up lying on a pew in a vast Presbyterian church where Tony Conrad, John Cale’s minimalist mentor, is building a thick and enveloping nest of delay and drone from his solitary violin. Later in the same venue, New York drummer Jonathan Kane corrals four searing leftfield guitarists and a bassist for some clanging, relentless motorik chugs that make avant-garde capital out of roots music. In Austin, it seems, even avant-gardists get the blues.