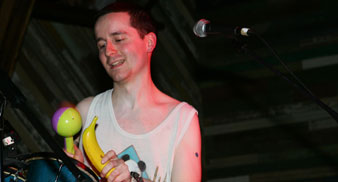 Tornadoes are brewing in the north of Texas, but the sheer density of Brits seems to have imposed our own weather system over Austin. Dank low clouds and drizzle greet LA’s Lavender Diamond at a lunchtime party in the grounds of the historic French Legate’s House, encouraging singer Becky Stark to speculate on whether weather is an “intelligence”.

Stark is one of SXSW’s unheralded stars, a pure-voiced singer with the air of a hippyish primary schoolteacher, whose songs recall a sweet, untortured variant on Judee Sill. Her odd band are so good Uncut sees them again a couple of hours later, after a roistering set by Witch, a four-piece power trio who play Cro-magnon stoner prog and feature a very benign-looking J Mascis on drums. We also manage to finally catch Wooden Wand, having narrowly missed this free folk renegade about four times already this week. Forsaking the fragmented jams that dominate most of his myriad albums, Wand seems to have focused his talents into coherent country-psych songs. It’s a neat fit.

The trippiness continues at our favourite non-corporate hang-out, the Rambler stage in the Mexican district. Bad Wizard come on like sadly-departed metal freaks Zen Guerilla, while The Rogers Sisters have happily expanded their post-punk garage rock into needling freak-outs. The arrival of manic Hawkwind types DMBQ, from Japan, is a bit much, though, so we head for the consoling pleasures of Richard Hawley, as at home in Texas as he is in Sheffield. The pick of the week’s British bands, later, are Hot Chip, rapidly evolving from twee electropop roots into a gentle juggernaut, at once mournful and euphoric, in the vein of New Order.

Today’s pick of the American acts, meanwhile, is LA singer-songwriter Richard Swift. Swift has been making records on tiny labels for a while now – two terrific albums were reissued on one disc last year by Secretly Canadian. Clearly, though, his potential is much bigger, judging by this confident, rumbustious set of piano pop. Swift variously recalls Nilsson, early Tom Waits and, especially, Rufus Wainwright, but it’s his own idiosyncracies – and those of his eccentric but accomplished band – that linger.

Finally, from the sublime to the sublimely ridiculous. Ghostface Killah wraps up SXSW with a hits-packed set of Wu-Tang gems, culminating in sitdown sob through the awesome “All That I Got Is You”. “This one’s for all the gangstas in the house,” he says. Actually, it’s for a few hundred indie types falling over from beer and exhaustion. Still, nice thought.