Some thoughts on Christopher Nolan’s Interstellar

The cosmology of Christopher Nolan's new film, Interstellar, offers an instructive analogy for the career of the director himself. 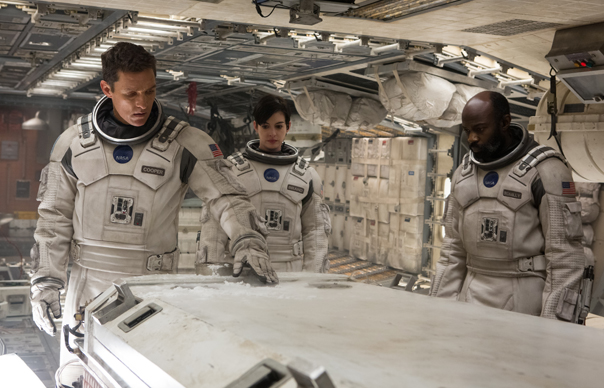 The cosmology of Christopher Nolan’s new film, Interstellar, offers an instructive analogy for the career of the director himself.

As with all heavenly bodies, Nolan began his career with small, but remarkable pieces like Following and Memento, gradually growing in size and brightness with his early Hollywood movies – Insomnia, Batman Begins and The Prestige. Now, such is his magnitude and vast gravitational pull, Nolan has become something of cinematic black hole: exerting considerable influence on his environment, playing fast and lose with established notions of reality, everything subjected to its relentless pull.

Throughout his career, Nolan has been taunting us with cinematic trompe l’oeils and third-act rug-pulls. Indeed, I think Nolan’s best films are ones that more closely resemble games, rather than novelistic narratives. In Memento, Guy Pearce’s amnesiac Leonard is accused of turning his life into “a puzzle you could never solve” and much the same is true of Nolan’s filmmaking agenda. Inception, for instance, disappears into its devilish intricacies; a movie that celebrates to its own internal workings and little else. Gamesmanship runs through Nolan’s films – cop vs killer in Insomnia, rival magicians in The Prestige, Batman vs assorted super villains in the Dark Knight films. But for the most part Nolan is also playing games with his audience. I’m not convinced that Nolan is actually bringing bold, radical new ideas to cinemas. Certainly, he’s an intelligent man capable of making stunning pieces of cinema, but the impression that his films are somehow operating a higher intellectual level than, say, a James Cameron film is just another deft piece of misdirection on his part. Nolan’s work does not standup to sustained intellectual scrutiny, that’s not the point. We should enjoy them; but we certainly shouldn’t allow ourselves to be convinced that they offer anything less than a diverting entertainment. Lest we forget, Nolan’s most successful films are comic book adaptations; it’s hardly Tolstoy. “Intelligent blockbusters” are as much an oxymoron as “a serious superhero movie”.

For Interstellar, Nolan is not so much leading us down narrative rabbit holes but wormholes in the very fabric of space. Interstellar is set in our universe, and also several others. To underscore the thinking done on Nolan’s film, New Scientist have published a guide to the science of Interstellar, which includes useful explanations of the wormholes, black holes, singularities and interstellar travel that feature in the film. The on-screen depictions of the wormholes and black holes are based on scientific data. If it sounds impressive, the reality is it feels like more sleight of hand from Nolan. This is really a high-tech retelling of a frontier myth familiar to any number of westerns. There is at least one lengthy discussion about science in the film, however it involves a scientist-turned-astronaut played by Anne Hathaway delivering the line, “Love is the only think that transcends time and space!”

We begin, however, on Earth at some point in the near future. Climate change has left the planet on the brink. Cooper (Matthew McConaughey) is a former pilot who now tends his farm amid worsening dust storms. “We used to look up at the sky and wonder at our place in the stars,” he reflects. “Now we just look down and worry about our place in the dirt.” Technology has been done away with; all mankind’s energies are devoted to farming to keep the human race alive. Meanwhile, deep in an underground bunker, Michael Caine – in charge of what remains of NASA – has a cunning plan to save the species by dispatching Cooper and a small crew on Endurance, our last serviceable rocket, through a wormhole in search of new planets to colonise. He believes he has help, though, from extraterrestrial benefactors; while another unseen force appears to communicate with Cooper’s daughter, Murph, by leaving signs in the dust that accumulates on her bedroom floor. This first hour drifts dangerously close to M Night Shyamalan territory. Expository dialogue is intoned; Caine’s reading of Dylan Thomas’ “Do Not Go Gently Into That Good Night” while Cooper’s rocket lifts off is vintage ham.

Indeed, Nolan’s film remains po-faced, solemn and overbearing for its entire three-hour running time. Hans Zimmer’s sepulchral score is trowelled on. The dialogue is a ridiculous mix of platitudes (“Mankind was born on Earth; it was never meant to die here”) and foreshadowing (“This world was never enough for you, Coop”). The characters rarely interact in a conversational or realistic manner – it’s mostly one character telling another (very seriously) what they have done, is doing now or is about to do. All of which is a shame, frankly. There are breathtaking moments here. A single shot of the Endurance as it passes along side Saturn, accompanied by a minimalist, Harold Budd-style piano motif, is stunning. The realisation of alien planets – one, whose surface is entirely covered in water, another layered in permafrost – and far away galaxies are often seductively beautiful. The sequences where Endurance travels through the wormhole – and later depictions of five dimensional space – are deeply impressively. Nolan is clearly in awe of the heavens; but it’s a pity there is too little evidence of human qualities elsewhere in the film. He has a strong cast; they seem wasted on the endless exposition. McConaughey is predictably excellent as Coop. In one of the rare moments where the film pauses for breath, Coop watches of video messages sent to him by his son and daughter back on Earth that have taken two decades to reach him. Nolan’s camera closes in on McConaughey’s face as he breaks down into tears. It’s deeply affecting and for once Nolan comes close to engaging with Cooper’s plight, telegraphed earlier by Anne Hathaway’s Brand: “You might have to decide between seeing your children again and the future of the human race.” Hathaway, meanwhile, is a staunch, intelligent presence. On Earth, Jessica Chastain does her best with an underwritten part as Coop’s grown-up daughter, Murph, who is more a plot point than a defined character. Matt Damon and Casey Affleck are among the other, familiar faces. But it is possible that the characters you end up sympathising most with are TARS and CASE – a pair of robots with a conspicuous resemblance to the black monolith from 2001: A Space Odyssey, whose plank-like segments can decouple and perform acrobatic feats necessary to combat the perils of deep space travel.

But for all Nolan’s IMAX-awe, high-end effects and differentiating time narratives (Interstellar is close to Inception in that respect), it ends up resembling a Steven Moffat-era Doctor Who story with “timey wimey” reveals. As with Inception, Interstellar is in thrall to its own internal dynamic; though it lacks the pleasing qualities of watching a big game played out that the film possessed. There is a good movie lurking in one of Interstellar’s many striking dimensions; but much like that pesky black hole, it is can never entirely pull free of the awesome gravitational pull of its own weight.