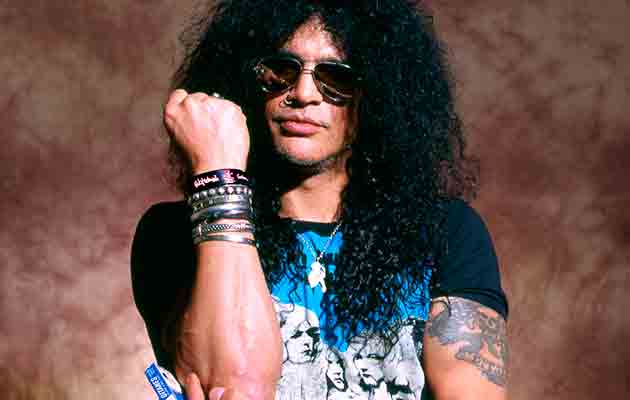 Do you still have any contact with Stoke-on-Trent?
Phil “The Power” Taylor, darts champion and native of Stoke
My dad’s family are still there, although I didn’t see them for a long time. I was reunited with them in the early 1990s when my uncle David saw something in the British press about “Slash – real name Saul Hudson” and contacted my office and I was like “wow, David Hudson! That’s my fucking uncle!” So I invited my uncle and my grandfather and a few others when GNR played Wembley, and they hung out in the dressing room, and they cleaned me out of drink! And that takes some doing. I was pretty annoyed but, in a weird way, I felt very proud that I was part of this grand lineage of English piss-heads.

Did you have posters on your wall as a kid?
Rizwan, Harrow
I had a King Kong poster. And anything with dinosaurs on it. And as I got older I had the same Led Zeppelin, Aerosmith, Rolling Stones and Hendrix posters that all kids had at the time.

Stoke City or Port Vale?
Jamie Bowman, Merseyside
I think my father’s family in Stoke were all Stoke City. The only time I keep up with my football is when I’m in England. In fact, the only game I’m physically been to was a really good game between Arsenal and Manchester [United]. When I’m in LA, you don’t really get much football, which is why David Beckham was such a big deal. That was hilarious. I think he just came here to take the piss, you know? The idea that America is going to convert to football by paying a king’s ransom for this English guy with a fucked ankle. Everyone on the other side of the pond must be laughing their asses off.