Siouxsie Sioux’s arrival on stage for her first show in nearly five years is announced by a small plume of dry ice that begins to rise from behind the drum kit at precisely 8.50pm. 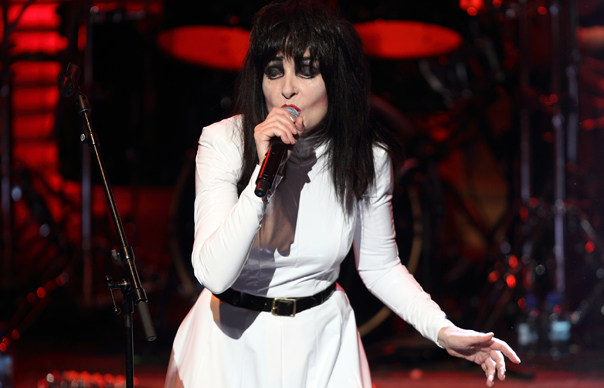 Siouxsie Sioux’s arrival on stage for her first show in nearly five years is announced by a small plume of dry ice that begins to rise from behind the drum kit at precisely 8.50pm.

When she walks briskly onto the stage a few minutes later, to the theme from John Carpenter’s The Thing, she is greeted with a standing ovation and a sudden rush of bodies towards the front of the stage. And this, before her band have even played a note.

I’m reminded of similar scenes that greeted Elizabeth Fraser on the same stage during last year’s Meltdown Festival: another rare performance from a reclusive artist at a curated event. But there the similarities end: while Fraser was virtually static during her set, privileging her voice above all other considerations, Siouxsie is a whirl of scything arms, stomping and swirling round the stage. She looks incredible, incidentally, imperious and glamorous, dressed from collar-bone to ankles in a shiny white PVC creation.

If this is about the return of Siouxsie Sioux in 2013, the set itself harks back to the Banshees at their peak, with a full performance of the band’s 1980 album, Kaleidoscope. Arguably, it’s the album where the Banshees’ perfected their sound, the coming together of the band’s strongest line-up – Siouxsie, bassist Steve Severin, drummer Budgie and guitarist John McGeoch. Indeed, as much as this evening is a celebration of Siouxsie’s return to active service by way of one of her signature albums, there are significant absences here – not least among them her former Banshees colleagues and McGeoch himself, who died in 2004. Siouxsie’s band tonight – essentially, her Manta Ray-era touring band – do well enough at replicating the very distinctive playing styles of the original musicians on Kaleidoscope. But not even guitarist Steve Evans can quite match McGeogh’s delicate, circular phrasing on “Happy House” or the dense, chopping chords of “Skin”.

The first encore – “Israel”, “Arabian Knights”, “Cities In Dust”, “Dear Prudence” – is a brilliant summary of the Banshees at their best: a terrific mix of pop hooks and arty strangeness. I can’t think of many Top 30 singles that have chosen the fall of Pompeii as their subject matter or that include the deathless lyric, “As you conquer more orifices of boys, goats and things”. A second encore, foregrounding material from her solo Manta Ray album, finds Siouxsie understandably wishing to showcase her post-Banshees work, but it feels less vital at this point in the concert. Those who hoped for a “Hong Kong Garden”, “Spellbound” or “Peek-A-Boo” would have perhaps left a little disappointed – yet all the same, it wouldn’t entirely have felt Siouxsie-esque to have just turned up and done a by-numbers greatest hits set.

Where this will lead next is anyone’s guess. Tonight’s audience, at any rate, include Polly Harvey, Thurston Moore, Nick Rodes and Gary Numan, which comfortably illustrates the spread of Siouxsie’s fanbase. There is no suggestion of new material. Admittedly, there is still some unfinished Banshees business – Universal cut the band’s 2010 reissue programme before putting out the band’s last four albums, though pragmatically the best of the catalogue made it out there. Certainly, in a musical landscape that currently features Savages and Fever Ray, Siouxsie would at least find herself among like-minded company. Unlike, say, Garbage, who turned what was interesting about Siouxsie into something pedestrian, Savages and Fever Ray at least appear to understand the nuance and mystery of the Banshees at their best.
Michael Bonner