Ryley Walker’s Golden Sings That Have Been Sung

One of 2016's landmark albums reviewed 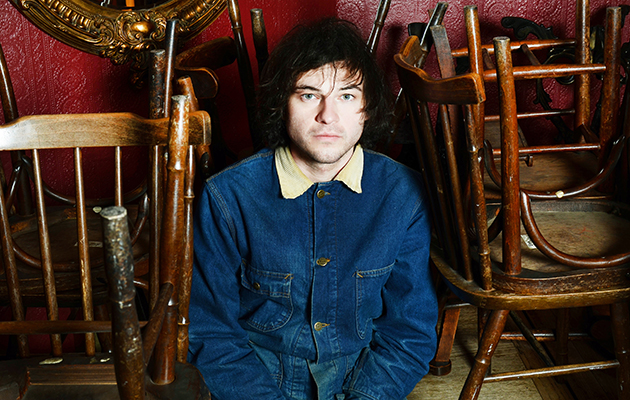 In the past year or so, Ryley Walker has faced a peculiarly modern dilemma: how can he be a confessional singer-songwriter, in the tradition of his old heroes like Tim Buckley, when he finds it easier to reveal his true self on social media? Thus far, Walker has seemed more of an impulsive than a reflective character, both in his ravishing guitar improvisations and in his indiscreet Twitter binges. 2015’s Primrose Green was recorded in a mere couple of days. Like most of us, Walker’s Twitter epigrams rarely appear to have been contemplated for anything longer than the time required to type them.

Until now, there has been a striking disconnect between his songwriting voice and his online persona. Here he is on Primrose Green, singing, “Hide in the roses, fragrant and wild… Love me honey, all through the night.” And here he is on tour and on Twitter, a couple of weeks after that album was released: “When I’m in Scandinavia and see all the beautiful people I feel I’m made of farts.”

How, then, to resolve these two distinct Ryley Walkers? As Primrose Green gathered momentum and acclaim last summer, and he and his band zigzagged across the Atlantic, Walker evidently stumbled upon a kind of reconciliation. The bucolic troubadour pose would be trashed in favour of songs with titles like “The Halfwit In Me”, and his quicksilver musical energies channelled into a sound that moved beyond the touchstones of Buckley, Jansch and John Martyn. Contrarily, this new music would be more composed and less jammed than before: on “A Choir Apart”, orchestrated flurries would answer his proclamation, “I control the weather”. But the unpredictability of Walker would be apparent in the text of every song. Nights would be long, drink taken, and vainglorious boasts – “I can take any motherfucker home who loves me” – casually made. Many evenings would begin with no money; many others would climax at 4.30, as the speed is kicking in. Some way into the beatific odyssey of “Age Old Tale” he would urge, “Go on, take my advice brother/Skip out on the bill, and piss on the rest.” The halfwit in Ryley Walker would rise, triumphant, to the surface of his songs.

This is the basic plot of Golden Sings That Have Been Sung, the wonderful, self-deprecating new album from this most productive and compelling of artists. Walker is 26, and already has a strong catalogue of releases behind him: Primrose Green and its folkier 2014 predecessor, All Kinds Of You; probing instrumental duo records with Daniel Bachman, Bill Mackay and Charles Rumback; a rewarding hinterland of juvenilia, experimentation and live downloads.

Walker has always been a charismatic figure, whose work has mostly been defined by its multitudinous influences. An open-hearted love of music means he never tries too hard to cover his tracks, and a matrix of reference is still evident on Golden Sings… But where previous records nestled comfortably in a woody recreation of late ’60s and early ’70s jazz-folk, Walker has skipped forward by 20 or so years. This time, his key role models come from the 1990s: the ornate, methodically groovy end of the post-rock that once proliferated in his Chicago hometown; the unstinting revelations of Mark Kozelek and Mark Eitzel.
When these elegant manoeuvres – arranged and produced by LeRoy Bach, a key Wilco member on Summer Teeth, Yankee Hotel Foxtrot and A Ghost Is Born – combine with the wild vigour of Walker and his band, there’s a sense of something newer being plotted. “Funny Thing She Said” and “I Will Ask You Twice” initially follow the same sort of measured trajectories as American Music Club or Sun Kil Moon, and seem to carry a similar, verbose burden: “Funny thing she said to me/I could see you giving me a child,” begins the former, with a keen grasp of how to make the most quoteworthy entrance. But Walker is much too idiosyncratic to be a mere imitator of those angsty raconteurs.

In the interview that accompanies this review, Walker claims the album is a kind of statement of maturity, in which he looks indulgently on his wayward younger self from the lofty vantage point of 26 years. “Wise ass wisdom,” he asserts in “A Choir Apart”, is “wasted on the young.” It’s worth noting that Walker’s new grown-up perspective is not always apparent on his ongoing Twitter feed, revolving as it still does around excess, dubious hygiene and wry takedowns of himself: “My style,” he decided on May 29 this year, “is the kid who laughed at the birth video in health class.”

Part of Walker’s appeal is that engaging self-knowledge, and he admits that, “in five years’ time I’ll look back and say when I was 26 I was a real dumbass.” On Golden Sings… he has moved far beyond fey generalities, and found a way to fold his rambunctious personality into the warp and weft of the songs, without ever detracting from their integral beauty. It’s a document of how his character and music are evolving in raw and nuanced ways, in directions which are rewardingly creative, if not always particularly linear.

This unpredictability, perhaps, pushes Walker to the forefront of an uncommonly gifted current crop of guitarists – Steve Gunn, William Tyler, Cian Nugent, many more – finding different paths out of the avant-folk underground. Walker is blessed with a sort of unfettered virtuosity which shines through even the compositional strictures of Golden Sings…: listen to the brackish, rapturous tangles that he steers himself into on “Sullen Mind”, one of the first songs written for the album and originally envisaged as filling an entire side (it eventually clocks in at 6:32).

Out of all this, Golden Sings… eventually looks something like the beautifully-upholstered diary of a talent in flux; the testament of a singer-songwriter prone to digressive energies, to potent shape-shifting and a generous appetite for trying everything. At the moment, Walker is on a prodigious run, where every tangent he takes pays off. It would be rash to assume that all his future moves might be quite so successful: a halfwit wouldn’t be a halfwit, without the odd pratfall. But it would be just as rash to assume that this profound, funny, intricate album will end up being seen as his masterpiece.

One morning in late June, at 10am local time, I called Walker at his girlfriend’s house in Chicago. He sounded groggy, but was preoccupied with the smoothie he had just made. “It’s mango and banana, man, a little yogurt, a little ice,” he said ruefully. “I’m trying to live a long time.”