So this, I think, might be a new thing: not so much a live recreation of a classic album, but a live recreation of the sessions which resulted in a classic album. A show predicated not just on evocative songs recorded 25-odd years ago, but on a nostalgia for outtakes that – up until a month or so ago, at least – most of the crowd in the Hammersmith Apollo tonight had never even heard. 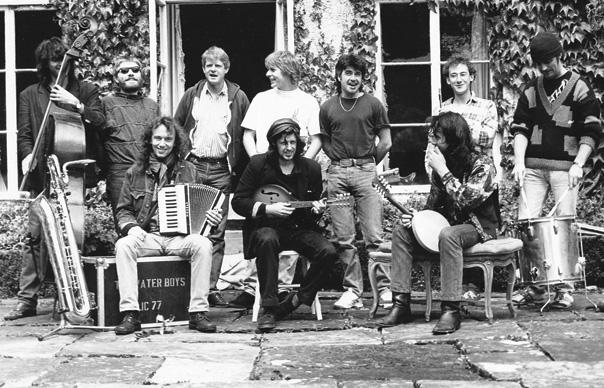 So this, I think, might be a new thing: not so much a live recreation of a classic album, but a live recreation of the sessions which resulted in a classic album. A show predicated not just on evocative songs recorded 25-odd years ago, but on a nostalgia for outtakes that – up until a month or so ago, at least – most of the crowd in the Hammersmith Apollo tonight had never even heard.

Such is the enjoyable paradox that lies behind Mike Scott’s reunion of the “Fisherman’s Blues”-era Waterboys. “‘Fisherman’s Box’ is the real album,” he notes drolly, “‘Fisherman’s Blues’ was the sampler.” Towards the end of a shortish British/Irish tour, Scott has the air of a vindicated man, whose expansive vision has finally been realised. He has, it seems, found a way to capitalise on the legendary status of the sessions conducted by himself, Steve Wickham, Anto Thistlethwaite and Trevor Hutchinson through the latter half of the 1980s.

All four have reconvened here, raggle-taggle swagger artfully recaptured with the exception of Hutchinson, the implacable bassist who looks like he grew into a proper job in senior management (appearances can be deceptive, of course, he has in fact remained a roving folk musician, as part of Lúnasa). For strict historical veracity, the quartet should be joined by a different drummer for pretty much every song. But, as it is, the excellent current Waterboys incumbent, Ralph Salmins, provides the backbeat consistency that the band lacked during those flighty ‘80s adventures.

“The ‘80s were so rubbish,” Scott suggests during a carefully-scripted introduction that, in its invective against synthesisers, drum machines and so forth, betrays a blissful detachment from the 1980s revivals that have cycled round and round for the best part of the past two decades. The musical explorations of The Waterboys were, he explains, a reaction to – fine phrase, this – “Gestural stadium rock”; exactly the sort of music, of course, that many expected Scott and his cohorts to make in the wake of “This Is The Sea”.

Instead, they went off in a different and ostentatiously rootsier direction, signposted by the covers they revisit from those old jams: “Girl From The North Country”; “The Raggle Taggle Gypsy”; Ray Charles’ “Come Live With Me” (magnificent); “I’m So Lonesome I Could Cry”; an uproarious, locomotive spiritual, “On My Way To Heaven”; and, best of all, the Celtic Soul epiphany of “Sweet Thing”.

At some point in tonight’s version – maybe during the febrile duel between Wickham’s fiddle and Thistlethwaite’s electric mandolin, just before Scott drops “Blackbird” into the blusterous midst of it all – it occurs to me that I like few cover versions more than this one. Maybe it’s the balance between faithfulness and personalisation, a sense of the original magic being extended, augmented, rather than lost or replaced? That might also be the key to how The Waterboys could be so in thrall to musical traditions, yet managed to both respect and transcend them: the idiosyncratic fervour of Scott – Planets colliding! Chains falling away at last!… The elemental pageantry is still intoxicating – and the heady interplay of the band.

Wickham’s improvisations grab the spotlight, of course, and it’s an immense thrill to hear him sending a sprightly “When Ye Go Away” off on a ravishing jig tangent, or locking into the quicksilver repetitions of “We Will Not Be Lovers”, very nearly as intense and startling as it seemed when I first heard it live in 1986. “I’d like to thank Lou Reed and The Velvet Underground for teaching us the glory of the two-chord song,” says Scott in its aftermath.

If anything, though, it’s Thistlethwaite who emerges as crucial to the sound: not so much with his Clemons-ish sax breaks, but with the distinctive electric mandolin ring that underpins so many of these songs, from “Fisherman’s Blues” itself back to an equally radiant, if substantially less well-known, “Higherbound”.

One of the joys of infiltrating “Fisherman’s Box” is discovering how many terrific songs were cooked up during those endless sessions, so I guess a minor problem of the show is that Scott doesn’t necessarily resurrect what – to my ears at least – seem the strongest of them. “Higherbound” and “You In The Sky” are both wonderful, but the inclusion of a decent enough blues vamp (“Tenderfootin’”) and a slightly inferior cousin to “Has Anybody Here Seen Hank?” (“Stranger To Me”) at the expense of, say, “Higher In Time”, “Too Close To Heaven” and “She Could Have Had Me Step By Step” (here’s my review of Fisherman’s Box, incidentally) is briefly baffling.

But where, really, should Scott begin and end with this surfeit of riches? He starts with a neat piece of emotional theatre, wandering onstage alone singing “Strange Boat”, then letting this extraordinary lineup reconstitute itself, one by one, as each verse rolls out.

He ends, after “How Long Will I Love You” and a fractionally stilted “Whole Of The Moon”, with a joyfully rambunctious “And A Bang On The Ear”, its open-hearted sentimentality and goodwill having even more resonance 25 years down the line. The support act, Freddie Stevenson, and 21st Century Waterboy James Hallawell help out in the Rolling Thunderish melee, which reaches a climax of sorts with Thistlethwaite’s Hammond solo. Then, at the death, roadies bring out a few chairs, shades and spare mandolins, and the entire company pose, before the backdrop of Spiddal House, to recreate the group shot that graced the cover of “Fisherman’s Blues”.

It’s an arch gesture, a historical re-enactment of a moment frozen in time – and exactly the kind of thing that makes some people recoil from these nostalgic projects. Nevertheless, it’s also a tribute to a period, half Mike Scott’s lifetime ago, when he tapped into a musical reservoir that illuminated and transformed his cultural life – and, I think, illuminated and transformed the cultural lives of a good few of us in the audience, too. Under the circumstances, a little rheumy-eyed pantomime can probably be excused…

5 GIRL FROM THE NORTH COUNTRY

7 WHEN YE GO AWAY

9 WHEN WILL WE BE MARRIED?

10 COME LIVE WITH ME

12 WE WILL NOT BE LOVERS

13 I’M SO LONESOME I COULD CRY

19 WHOLE OF THE MOON