A round-up of new and forthcoming releases… 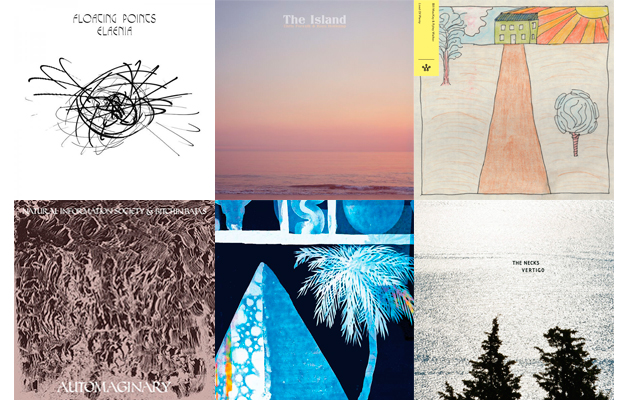 It’s one of those rare weeks when I don’t have a new magazine to flog you (though of course we have an enriching range of Uncuts, Ultimate Music Guides and History Of Rocks if you’re short of something to read). As a respite, though, it gives me the opportunity to round up reviews of a few albums I’ve liked a lot over the past couple of months.

I’ve had to miss an aggravating number of live shows these past few weeks, not least among them the Necks’ residency at Café Oto over the weekend. “Vertigo”, their relatively fraught 18th album, has at least provided some succour. If you haven’t encountered The Necks thus far into their 25-year career (here’s one of the last things I wrote about them), the Australian trio have become one of the most critically revered bands on the planet, renowned for their epic live improvisations and a back catalogue that exists in a rarefied interzone between jazz and ambient music (pianist Chirs Abrahams, incidentally, might be familiar to a few of you who’ve studied the small print on Triffids sleeves at some point in the past).

Their 2013 abum “Open”, at once serene and compelling, provided a useful entry point for newcomers to the Necks’ music. But “Vertigo” is a hairier experience, in which the band’s trademark grid of recurring phrases and silences is augmented by ominous drones and some explosive percussive disruptions. As ever, the single 44-minute track is immersive; those coming to The Necks for a transcendent mindfulness session, however, may find it distinctly unnerving in places.

They may, in fact, be better directed to the latest album by another band who recently played Café Oto, Chicago’s Bitchin Bajas. Cooper Crain and Bitchin Bajas’ discreetly intensive campaign to establish themselves as this era’s finest ambient/kosmische outfit has already produced one strong 2015 album in “Transporteur“. “Autoimaginary”, though, is a hook-up with another bunch of Chicagoans, Josh Abrams’ Natural Information Society. Abrams’ improv background is to the fore, as he and his bandmates provide organic rustle and scrape to the Bajas’ lunar synthscapes. The twitchiness never detracts, though, from the meditative calm of tracks like the Necks-like 19-minute opener “On No Fade”, while the fluttering epiphanies of “Anenometer” posit an alternative path Kraftwerk might have taken after “Ralf & Florian”; away from the “Autobahn”, towards an idiosyncratic take on spiritual jazz.

A couple more auspicious collaborations now. On September 9, Ryley Walker, a loquacious and irreverent Twitter habitue, announced. “Next Rec written n jammed live! All shows from here on will be to promote our not yet finished LP.” “Primrose Green”, released to much acclaim in March, was already old news; here Walker asserted himself as restless troubadour, always heading somewhere new. “Land Of Plenty” is, perhaps, a minor but beguiling stop on that journey, being a set of instrumental guitar duets with Bill Mackay, recorded during a Chicago club residency last January. In general more courtly and serene than the ecstasies of “Primrose Green”, there are still rapturous moments: “Gold Season”, for example, could just about plausibly be passed off as a John Renbourn/Robbie Basho face-off. Walker’s next serendipitous project, you may have seen, is a UK jaunt in the company of Danny Thompson; very much living the dream, I guess.

Unlike fellow travellers Four Tet and Caribou, Sam ‘Floating Points’ Shepherd’s profile has mostly been restricted to dance music circles, having spent a decade carving a reputation as a DJ. Floating Points’ debut album “Elaenia”, however, pitches him compellingly to a broader audience: as a club visionary whose music has now expanded to encompass rich jazz, ambient and classical influences. Much here, like the outstanding “‘Silhouettes (I, II & III)”, sits elegantly in a progressive tradition that draws on Teo Macero’s collage work on “In A Silent Way”, David Axelrod’s string arrangements, and Four Tet’s own “Thirtysixtwentyfive”. Worth noting, too, that another act have artfully juggled a very similar collection of influences: the closing “Peroration 6” is bracingly similar to latterday Radiohead.

Finally, something a little poppier. At this point, the back catalogue of Kelley Stoltz is so comically undervalued, it feels like something of a conceptual joke; designed for him to be rediscovered as a Great Lost Genius in 30 years’ time. His latest album, “In Triangle Time”, beautifully augments the myth, mostly forsaking Stoltz’ artisanal vintage freakbeat for equally catchy, new wave crypto-hits. He’s been in this territory before, covering the Bunnymen’s “Crocodiles” (2001), but never with such verve. Bowie, The Fall and the Teardrops get sly nods, in a set that seems primed for the Futurama Festival circa 1982. Fans of Stoltz’ more psychedelic work should also note the “Odds & Sods” offcuts EP, and a further album, “The Scuzzy Inputs Of Willie Weird”, released simultaneously.

A great moment a few weeks ago when we found ourselves crawling down the M11 at sunset, blasting out the bespoke rhapsodies of “In Triangle Time” and then noticing who was sat in the lane next to us: Jacco Gardner and his band.