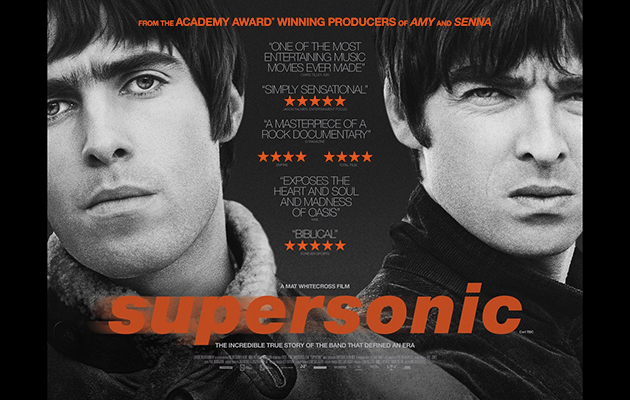 In Will Carruthers’ excellent memoir of his time with Spacemen 3 and Spiritualized, Playing The Bass With Three Left Hands, he recalls a fallow period working as a manual labourer where one job involved digging trenches for electric cables at Oasis’ Knebworth concerts. “Somewhere in the distance,” he writes, “I saw two white golf carts with people in them. It was the stars of the show… they drove round and round and laughed. Their joy seemed neither convincing nor entirely convinced, or maybe I was just jealous.”

The Knebworth shows in August 1996, where the band played to a total of 250,000 people, bookend Mat Whitecross’ documentary – tacitly suggesting that essentially it was all down hill from here for the remaining 13 years of Oasis’ career. Whitecross’ focus on the 2 ½ years leading it up to Knebworth allows Noel Gallagher to frame Oasis’ rise in terms that are both heroic and hackneyed: “We were grafters who came from nothing and took it all.”

Both Noel and Liam are on hand to provide voiceovers, accompanied by a close inner-circle including former bandmates Bonehead and Guigsy, label boss Alan McGee, manager Marcus Russell and Peggy Gallagher. Over footage, these voices helpfully take us from Inspiral Carpets tours in the late 80s to basement rehearsal rooms and onwards. It is a well-documented story, and the familiar narrative beats are all present and correct from McGee’s live epiphany at Glasgow’s King Tut’s Wah Wah Hut to the band being thrown off a ferry to Amsterdam, Noel’s sudden depature mid-American tour, oh, and Noel and Liam – they just don’t get on, right?

Whitecross’ problems aren’t just limited to the familiarity of the tale – much of it blasted onto the front pages of the tabloids at the time. Unlike Supersonic’s obvious antecedent Amy – members of whose creative team are producers here – Supersonic lacks much intimacy or insight. The lesser-told testimonials of childhood friends Juliette Ashby and Lauren Gilbert gave Winehouse’s story a freshness and immediacy. The arrival of the iPhone in the early Oughts, conveniently coinciding with her rising fame, was a boon for that film’s director Asif Kapadia. Whitecross only has shaky camcorder footage from the Manchester Boardwalk or the back of a tour bus; he must make do, then, with less satisfying, impersonal TV and concert film.

That said, a viewer looking to experience the ‘full Liam’, for instance, will be amply rewarded by scenes best described as “a big bunch of chaos”, much of it involving his brother. “Noel has a lot of buttons, Liam has a lot of fingers,” says Bonehead sagely. Often their sibling squabbling is just very, very funny; over distance, it begins to wear. A young Liam’s early revelation that all he wants to do is make enough money to buy Peggy a new home is surprisingly sweet. But perhaps the most revealing moment comes when the brothers find themselves in an Irish bar along with their estranged father, Tommy, who had been paid to contact the boys by a British tabloid. Liam is all for settling a few scores with his fists, but Noel talks him out of it. What Noel said to calm down his angry, impetuous younger brother has been lost to history, but Whitecross finally finds an opportunity to interrogate their sibling dynamic. It’s a shame there isn’t more of it.