Some favourite forthcoming albums reviewed, plus a new magazine from the Uncut stable unveiled 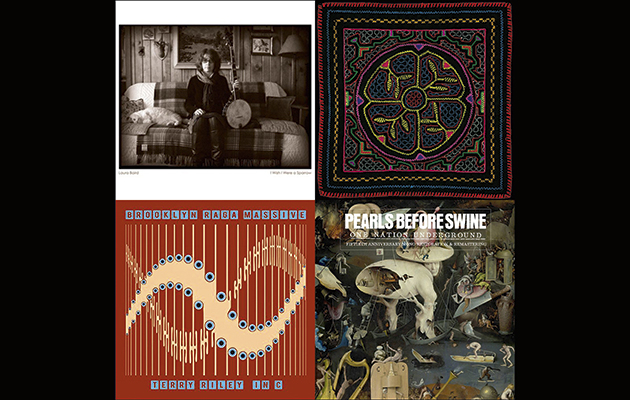 A bunch of good new albums to talk about today, but first I need to flag up a new mag we’ve been involved with, that goes on sale in the UK on Thursday. NME Gold is the first in a series where we invite a major figure – in this case Liam Gallagher – to curate their own magazine. There are big new interviews with Gallagher himself, plus he’s gone into the NME and Melody Maker archives to choose classic stories about his heroes. For more info on NME Gold: Liam Gallagher, please click here.

Moving swiftly on. Daft name notwithstanding, Cooper Crain and his Chicago crew Bitchin Bajas have established themselves these past few years as the foremost neue-kosmische outfit around. After various collaborations (including their profile-raising one involving fortune cookies with Will Oldham), the Bajas’ first full album in three years is a testament to expanding frontiers. Initially, “Bajas Fresh” remains focused on rapturous psychedelic electronica, albeit less dependent on the usual reference points – Terry Riley, Tangerine Dream et al – of old. Gradually, though, it embraces new textures: a vast drone piece (“Yonaguni”); a foregrounding of free jazz elements (“2303”, “Chokayo”, “Be Going”) that, as on their 2015 set with Natural Information Society, manage to be skittishly improvisational without undermining the overall serenity. A good time for your chakras guaranteed.

In a similarly improving vein is Brooklyn Raga Massive’s “Terry Riley In C” on Northern Spy. Few musical pieces in the modern classical canon provide the opportunity for a communal freak-out like “In C”@ recent versions have seen its 53 short musical phrases configured by a Guitar Orchestra lead by Portishead’s Adrian Utley, and by an Africa Express conclave in a Bamako youth club. Given the key influence of Indian music on Riley, it’s weird that no-one’s previously improvised on “In C” using sitars, tablas and so on. Brooklyn Raga Massive’s take, as a consequence, is a wholly logical and satisfying one. Part of “In C”’s genius is how no instrumentation sounds anachronistic to it, but the gracefully evolving systems lend themselves extremely well to the rich textures – listen out for the dragon mouth trumpet. A masterpiece of social music may have finally found its spiritual home.

Those who place value in folk bona fides should be impressed by Laura Baird’s family tree: her sister is Meg, the spectral singer who also currently jams in Heron Oblivion; her great-great uncle, IG Greer, was a notable song collector and singer in North Carolina. The pleasures of Laura’s new solo album, “I Wish I Were A Sparrow” (Ba Da Bing) are not, though, dependent on ancestry. As keen listeners will have spotted on three duo albums with her sister (notably 2012’s Until You Find Your Green), Baird is a nimble banjoist, and has one of those ethereal folk voices that can sound at once warm and uncanny. It’s a tribute to her songwriting, too, that new songs like the fine opener, “Wind Wind”, are such comfortable bedmates with trad picks like “Pretty Saro” and “The Cuckoo”. One to file alongside recent sets by House & Land and Nathan Bowles in your Contemporary Appalachian section. Also: contains actual sparrows.

One suspects that, in 1967, there must have been rather a lot of bands like Pearls Before Swine spattered across America. Formed in Florida by an antic high-schooler called Tom Rapp, the young PBS vacillated between Renaissance Faire whimsy and wheezing electric protest-folk on their debut, “One Nation Underground”, that’s been given a much-needed remastering and reissue by Drag City. At times, both can seem a little gauche: the solemn invocations of “the amber lady seated at her harpsichord in velvet”; some Dylan impersonations (cf “Playmate”) in which, if nothing else, Rapp’s nasal congestion sounds authentic. So far, so generic.

But the way the two strains combine, in haphazard ways, is what makes Rapp’s first moves so appealing, and why Pearls Before Swine’s music has been so venerated in outsider psych circles. A generally ramshackle air, all Farfisas on the edge of breakdown, finger cymbals and stray banjos, give a weird edge to garage workouts that’s closer to The Fugs than The Band – a pranksterish dimension compounded by the Morse Code signal “F-U-C-K” being beeped out in “Miss Morse”. Meanwhile, unsteady and lovely reveries like “Another Time” and “Morning Song” set a template for later, more fully-realised Rapp albums like Use Of Ashes – and for numerous waves of acid-folk over the ensuing decades. Devendra Banhart fans take note; he certainly did.