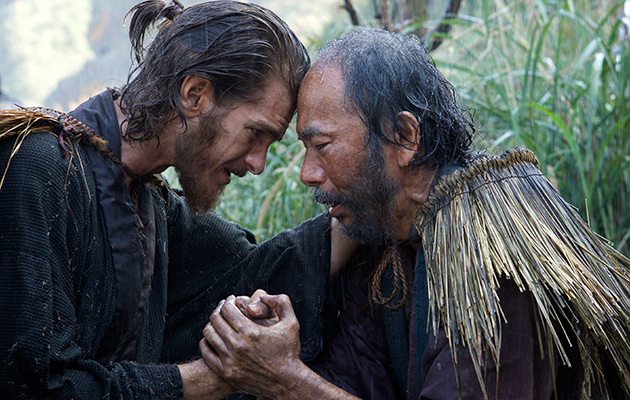 “As far back as I can remember, I always wanted to be a Jesuit missionary.” Sadly, this sentence isn’t actually spoken in Silence, Martin Scorsese’s latest film; though it certainly would not be out of place. We are, after all, deep in Scorsese’s laundry list of usual themes – faith, guilt, male bonding, violence – although on this occasion there are subtle differences. Silence is not set in a familiar urban milieu involving the rapacious schemes of hot-headed gangsters; the Rolling Stones do not appear on the soundtrack; Joe Pesci is not called upon to stamp anyone to death.

In fact, Silence is one of Scorsese’s long-cherished personal projects – like The Last Temptation Of Christ or Kundun (the latter, the punchline of a brilliant joke in an early episode of The Sopranos). This sombre and stately film is the story of two 17th century Portuguese missionaries who undertake a perilous journey to Japan to search for their missing mentor, Father Christavao Ferreira (Liam Neeson) – the superior of the Jesuits in Japan. But they learn that Ferreira might well have apostatized and in doing so, turned native. Scorsese follows Fathers Sebastian Rodrigues (Andrew Garfield) and Francisco Garupe (Adam Driver), as they head into the foreboding hinterlands of rural Japan – enemy territory, essentially, as Japan’s feudal lords and ruling Samurai are determined to eradicate Christianity. On paper, then, you could be forgiven for thinking that Fathers Rodrigues and Garupe’s quest resembles the plot of The Searchers – or perhaps even Apocalypse Now, as the myths around Ferreira shift and grow.

Co-adapted by Scorsese and Jay Cocks – his old collaborator on The Age Of Innocence and Gangs Of New York – Silence is based on a celebrated novel by Shûsaku Endô that examines the notion of God’s silence in the face of human suffering. And there is an abundance of suffering in Scorsese’s film. It opens with a scene in which a number of priests are scalded with boiling water. Later, Scorsese shows us drowning, beheading, crucifixion and burning alive, as Japanese Christians are killed for refusing to renounce their religion. But how do these physical acts compare to the religious suffering of his two priests, who are witness to these appalling acts? And where is God while his faithful are so viciously tortured? Such weighty themes, admittedly, a hard sell – and anyone expecting a revved-up Scorsese, on the back of the razzle dazzle bacchanalia of The Wolf Of Wall Street, might feel disappointed. This is hardly GodFellas – though the inquisitor Inoue (Issey Ogata) has an urbane, loquacious manner that recalls Christoph Waltz’ Colonel Hans Landa in Inglourious Basterds.

While Silence opens big – with mountains wreathed in mist or tracking shots through bamboo fields – it telescopes in on the plight of the two padres. Of course, Scorsese has been testing his protagonists faith since Harvey Keitel’s J.R. in Who’s That Knocking At My Door?, and in Garfield and Driver he evidently has two willing new disciples. Driver has a crusader’s zeal that is tempered by Garfield’s deep-seated sense of humanity. As the film progresses and Garfield’s hair becomes more-man-like and his beard ever shaggier, he comes to resemble Barry Gibb after a particularly heavy night out. Perhaps the more interesting character here is the crafty Kichijiro (Yôsuke Kubozuka), who has apostatized more than once as an act of self-preservation, yet returns to beg forgiveness from Rodrigues despite repeatedly betraying his faith. Compared to the spiritual conflicts of the priests, his outward agony and his strange convulsive behaviour seem a more natural – more human – response to the Big Questions that Scorsese asks of his characters. And then there is Neeson’s Father Ferreira, whose appearances bookend the film. It is a subtle, complex performance, where we are invited to conclude that Ferreira has identified the challenge to be located in the spiritual realm and also on the physical level. His understanding seems to be that in order to alleviate the physical suffering of others, he must suffer spiritually himself. It is, by the standards of this film, a most exquisite and prolonged torture.