“As far back as I can remember, I’ve always wanted to be a record company executive." 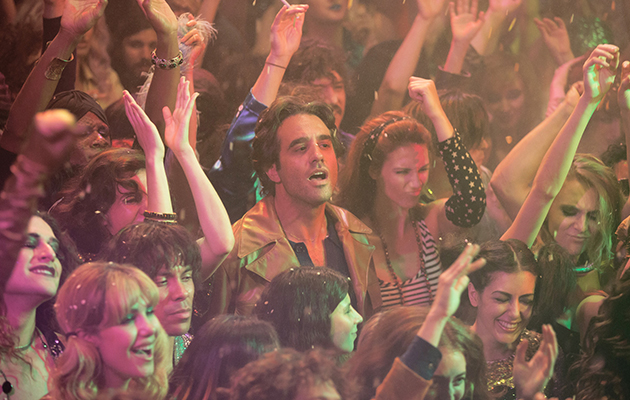 It seems strange, in retrospect, that Martin Scorsese has never directed a movie about the music business. After all, for over 40 years now, he has pursued a fruitful career alternating between feature films and music documentaries. His concert films on The Band and the Rolling Stones have been exceptional; meanwhile his profiles on Bob Dylan, the blues and George Harrison have worked hard to explore the complexities of their subjects. All his music projects, though, gravitate towards a romantic, mythological and quintessentially Scorsese theme: rock’n’n roll as a force for personal liberation.

Episode 1 of HBO’s new series Vinyl – directed by Scorsese – opens with a particularly instructive example of this. It is the early Seventies. Beleaguered record label boss Richie Finestra (Bobby Cannavale) has lost faith in the music industry. Sitting alone in his car, parked in an insalubrious part of Greenwich Village to buy cocaine, we witness his breakdown. The first nine minutes of Vinyl take place entirely inside the car, full of jerky, blurred shots and tight close ups on Finestra’s face. But – wait! – what’s that noise? Serendipitously, Finestra has parked close to the Mercer Arts Center, and he is drawn from his existential crisis by the raucous sound of the New York Dolls in full flight. In a breathtaking shot travelling deep into the bowels of the Mercer, Scorsese shows Finestra first hand the redemptive power of rock’n’roll.

Admittedly, it would be pretty funny if at this point, Finestra said in voiceover, “As far back as I can remember, I’ve always wanted to be a record company executive.” Like GoodFellas or Casino, Vinyl is concerned with money: the bribes and the cons, sackings and whackings and the cultivation of high rollers. Although by the end of the first episode, there have been no mysterious burials out in the desert, you suspect they may not be too far behind.

But Vinyl isn’t entirely a Scorsese venture. He has directed the two-hour pilot and is an Executive Producer on the show, along with Mick Jagger. The project was cooked up by Scorsese and Jagger when they worked together on Shine A Light; at one point, The Departed’s scriptwriter William Monahan was employed to write a feature-length screenplay. Jagger’s original idea – for two friends in the music industry, and the ebb and flow of their relationship across many decades – mutated as the project moved around studios, before finally arriving at HBO. The showrunner here is Terence Winter, a Sopranos veteran who previously worked with Scorsese on Boardwalk Empire and The Wolf Of Wall Street.

But despite Vinyl’s lengthy gestation and the strong personalities of all involved, the imprimatur is entirely Scorsese’s. The voiceovers, flashbacks, period detail, impeccable soundtrack choices, freeze frame, tracking shots, violent outbursts… even the hysterical mugging between Finestra and his colleagues at American Century Records recall the banter between, say, Robert De Niro, Joe Pesci and Ray Liotta in GoodFellas. Their mistrust of outsiders and an impulse to take care of business according to their own rules are all commonplace within a Scorsese picture. But there are other particular qualities to Vinyl: some specific to Scorsese, some less so.

Vinyl is set in 1973, the same year Scorsese made Mean Streets. Many of the episode’s locations – particularly those round Greenwich Village, where the director was raised – would be familiar haunts. The date is significant for other reasons besides. One sequence is bookended by a Led Zeppelin show at Madison Square Gardens and Kool Herc’s legendary hip-hop jam at 1520 Sedgwick Avenue. In it, Finestra is chauffeured through New York’s streets at night. The car makes painfully slow progress – a burst water main is the culprit – allowing Scorsese’s camera to dwell on strange expressionistic details – abstract neon signs, the elongated shadows of pedestrians – that evoke the hallucinatory, nightmarish qualities of Taxi Driver.

In the background, meanwhile, the car radio drifts in and out of stations, providing a handy sound collage of contemporary voices: the King Biscuit Flower Hour, Humble Pie’s “Black Coffee”, an election broadcast by mayoral candidate Albert Beame, “All The Young Dudes”. In an interview in Entertainment Weekly, Scorsese explained, “New York in the 70s was at an all-time economic low point. Nothing worked. The subways were falling apart. The crime rate was sky-high. But then, at the same time, culturally speaking, it was a high point… The early 1970s, and 1973 in particular, was a time of great change in the music industry, and it all started in New York City – punk, disco, hip-hop, they all began that year right here in this city. So we decided to start there and see where it would take us.”

As you might imagine in such a vivid milieu, Finestra is surrounded by many colourful supporting characters – many of them fictional, a few conspicuously not. At home, there is his demure wife, Devon (Olivia Wilde), a former model (“Andy asked for you just the other night. Lou was with us,” says Borgen’s Birgitte Hjort Sørensen, a kind of Nico analogue). At American Century, meanwhile, Scorsese introduces us to Finestra’s lieutenants. There is the blustering A&R exec who can’t sign the right band, a business partner who inadvertently insults everyone he meets, a talented female A&R scout whose on-the-money tips are routinely ignored by her male bosses (Juno Temple, evidently having a blast). Elsewhere, there is a strong cameo from Andrew ‘Dice’ Clay as the belligerent owner of a chain of radio stations, unrecognizable beneath a pair of substantial walrus sideburns, and James Jagger as the English vocalist with proto-punk band, Nasty Bits. In flashbacks, Scorsese shows us Finestra’s entrance in the music business during the early Sixties: the money and influence of the Mob grease his rise, allowing Scorsese the opportunity to deliver a signature incident involving a baseball bat. In these sequences, Paul-Ben Victor excels as a vulpine executive who offers advice to Finestra. But again, this is classic Scorsese territory, recalling the way the young Henry Hill worked his way through the mob hierarchy, only here Finestra is pushing novelty hits rather than running numbers.

The depiction of ‘real people’ is more variable. A conversation with Robert Plant backstage at Madison Square Garden, for instance, finds Plant’s accent wandering amusingly between Cockney and Australian, though the depiction of Peter Grant more successfully nails his volatile temperament. It transpires that “The Zeppelin deal” becomes a critical plot point for the first episode. For future episodes, the show’s IMDB cast list includes David Bowie, Stephen Stills, David Crosby, Hilly Kristal and Peter Tosh. Bobby Cannavale, incidentally, is excellent. His heavy-lidded eyes recall Al Pacino; though he is a warmer screen presence. In one boardroom scene, he and his partners are in final negotiations to sell American Century to German competitors.
“Fiscally speaking, “1972, American Century claimed 6 million dollars in profit,” notes one eagle-eyed German businessman. “Yet 92% of the records you released were, speaking frankly, flops.”
“Technically, yes,” nods Finestra. “But in reality, they only look like flops…”