The band reunite for their gig in almost 20 years 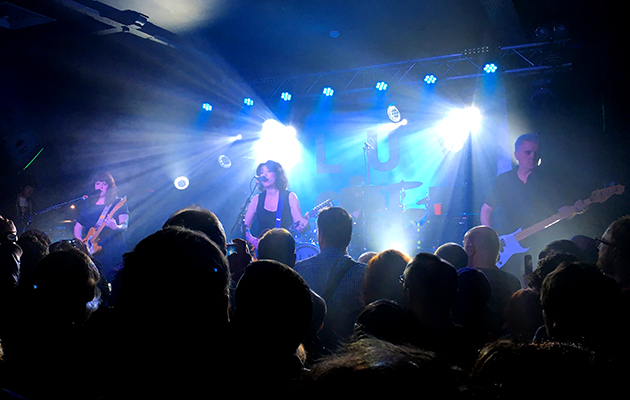 “Fucking hell, this is exhausting,” says Miki Berenyi, four songs into Lush’s first gig for almost 20 years. This is, perhaps, not the most auspicious way to celebrate her band’s comeback; but, then, there was always something a little self-deprecating about Lush. During the band’s heyday in the late Eighties/early Nineties, Berenyi – along with her co-conspirators, Emma Anderson, drummer Chris Acland and bassist Phil King – carried themselves in a likable, slightly larkish manner. They made sparkling, opulent records; but behaved as if they couldn’t quite believe the were among the hottest bands of the period. There was an ineffable, held-together-with-gaffer-tape charm to Lush which, it seems, still remains two decades since they last played together.

That Lush have returned at all seems partly a pragmatic decision, partly an emotional one. They can’t help but have noticed the recent success enjoyed by contemporaries Slowdive and Ride, who reformed in 2014 and 2015. But it also seems likely that they are keen to honour the memory of Acland, who committed suicide in October 1996. You suspect there is some trepidation – residual or otherwise – in playing this material for the first time without him. As it transpires, former Elastica drummer Justin Welch acquits himself well.

In the years since Lush formally announced their split – in February 1997 – the individual members have had different degrees of involvement in music. Guitarist/vocalist Anderson played in Sing Sing for ten years while King has juggled his commitments as picture researcher for Uncut with duties in the Jesus And Mary Chain. His predecessor, Steve Rippon, appears to have entirely retired from music. Berenyi, meanwhile, disappeared from the spotlight. Considering such circumstances, they are in commendably excellent shape. Gathered before a supportive audience at Oslo – a 300-capacity bar/eaterie/venue in Hackney – for a warm-up show ahead of this weekend’s Coachella festival, their set reminds us of their distinct charms.

Lush occupied a hazy middle-ground that was neither straight pop nor as experimental as some of their fellow 4AD signings. The sheets of feedback that dominated their early recordings – and is evident tonight on “Deluxe”, “Breeze” and “Scarlet” – were always complimentary to Berenyi and Anderson’s serene vocal harmonies. Lush were never as harsh or idiosyncratic as, say, the Cocteau Twins, or as dense and amorphous as Slowdive.

Instead, many of their best songs – “Thoughtforms”, “Sweetness And Light”, both of which are standouts at Oslo – were built around cascading melodies that motored them forward. It’s easy to forget how strong their forays into ‘proper’ songs are, too. Tonight’s tremendous, propulsive version of “Ladykillers” presents a tantalizing what if? scenario, where it is possible to speculate how successful they might have been had not Britpop swaggered along and, to all intents and purposes, spoilt the party for Lush and many of their peers. The new song, “Out Of Control“, meanwhile, sounds satisfyingly like the band picking up from where they left off.

Berenyi is still a confident stage presence, whether mock-apologising for no longer having trademark red hair or responding to good humoured audience banter. Despite having barely been on stage for the last 20 years, she seems remarkably unphased by tonight. Anderson, meanwhile, is a more stoical presence; silent save for singing harmonies. Contrarily, they don’t play “Single Girl” – their joint biggest chart hit – but instead their encore climaxes with the harsh squall of “Leaves Me Cold” and the dreamy refrain of “Monochrome”. Both represent the dual qualities of Lush: a fine return, then.