There are some things you never expect to see. Take, for example, a live performance of “Parallelograms”; a song of uncanny atmospheres and dynamics, recorded in 1970 by a dental hygienist with only a fleeting involvement with the music business. 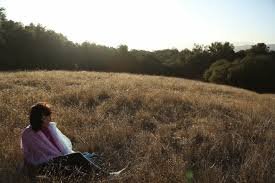 There are some things you never expect to see. Take, for example, a live performance of “Parallelograms”; a song of uncanny atmospheres and dynamics, recorded in 1970 by a dental hygienist with only a fleeting involvement with the music business.

Like much of the album of the same name, “Parallelograms” sounded more or less unperformable when I first heard it a decade or so ago; an academic point, really, since its creator, Linda Perhacs, had never sung live during her short and unsuccessful pop career at the start of the ‘70s, let alone in the intervening 30-odd years. Still, interviewing her in 2004, she told me, ““The songs that have poured out of me in the past year are the best and strangest of my entire life. The world has so many catastrophic problems right now, I began to realise it’s a better time than ever for those of us who are sensitive to be expressing some of our ideas.”

It has taken another decade for Perhacs to record a new set of songs but, perhaps even more weirdly, here she is, manifested in Britain for the first time at the end of a short European tour (her first ever trip out of the States, according to her bandleader/co-producer/co-songwriter Fernando Perdomo). The venue is our home of indigenous folk music, Cecil Sharp House in North London, but from the opening synth wash it becomes obvious that Perhacs has been mostly miscategorised as a folk singer, even of the notionally psychedelic variety. She is playing “Chimacum Rain”, from “Parallelograms” and where, on the original version, her fragile vocal was multitracked into a kind of vortex, tonight the disorientation is recreated by reverberant harmonies from Michelle Vidal and Durga McBroom (a woman with an interesting past, having spent a good few years belting out “The Great Gig In The Sky” as part of the Pink Floyd monolith, as well as a short stint as a UK pop-house star fronting Blue Pearl, of brief “Naked In The Rain” fame).

The expediencies of live performance do nothing, mercifully, to detract from the strangeness of this music, or its beauty. In re-imagining these ancient and delicate studio confections, Perdomo and the other co-producer/co-songwriter Chris Price have conspired with Perhacs to keep the instrumentation minimal – a little pre-set synth/electric piano, acoustic guitar, occasional bass, even rarer hand drums from Vidal – and focus tightly on the heady vocal blend. It’s a judicious strategy, never more apparent than on a mighty version of “Parallelograms”: the temptation to fill the avant-garde void at the song’s heart with session muso trickery must have been strong, but mostly they leave a potent space for the madrigal harmonies and Perhacs’ incantations, only slightly disrupted by McBroom’s improvised warcries.

A couple more “Parallelograms” songs, “Hey, Who Really Cares” and “If You Were My Man”, are broadly more conventional in nature, if no less beguiling, sounding in this context a bit like the work of a New Age Bacharach & David, an astral Carpenters. This is, too, the predominant vibe of Perhacs’ lovely new album, “The Soul Of All Natural Things”, due out next February. It’s to the credit, again, of Perdomo and Price that the batch of new songs – notably “Freely”, “Song Of The Planets” and, especially, “Prisms Of Glass” – fit so seamlessly into the aesthetic established by what Perhacs continually refers to as “the ‘70s album”.

Consummate musos, Perdomo and Price don’t appear to have the avantist chops of, say, Julia Holter; a Perhacs fellow traveller whose contribution to “The Soul Of All Natural Things” is mostly limited to providing background vocals. Nevertheless, there’s a clear empathy between them and Perhacs, a shared sense of purpose that means solo turns by all four of the band, while not exactly essential (Vidal’s resounding gospel blues is the pick, I think), do nothing to undermine the beatific air of goodwill that pervades the whole show.

Entering this environment, of course, demands a certain suspension of cynicism. Perhacs’ language of nebulous energies, celestial harmonies and spiritual visitations will not be to everyone’s tastes: describing the origins of “Parallelograms”, she talks of having visions that involved something she describes, with characteristic vagueness, as “pure physics”, and which – she is keen to wryly assert – pre-dated the 1970s. ““I’m not a drug user,” she told me earlier this year. “I never was in the ‘60s and ‘70s, but I loved those people because they were dealing with energies, and our conversation level would be very deep. I’m deeply intuitive, I see and hear things the average person might not experience.”

Tonight’s show, though, is a gentle masterclass in how music can be so gorgeous and compelling that it forces us – or some of us, at least – to momentarily suspend our disbelief. The recycling and relaunching of supposedly “lost” artists has become such a common and in some cases lucrative business (The Rodriguez Syndrome, is probably the technical term) that Linda Perhacs’ return should not, now, feel exceptional. But it does: as if an ineffably precious sound and worldview has been preserved in aspic, and carefully put on public display as never before. Miracles, as Perhacs would doubtless have us believe, evidently can happen.