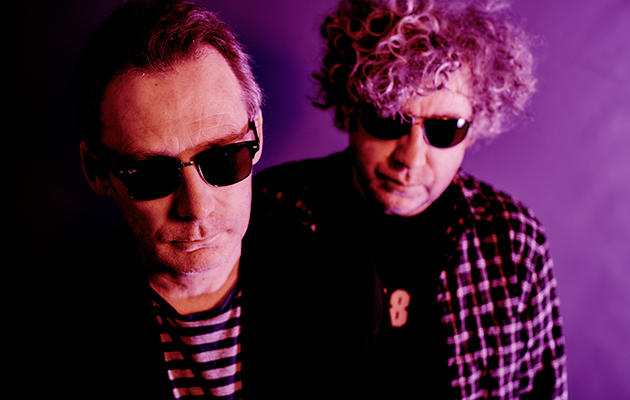 On the final song of their last studio album, Munki, Jim and William Reid articulated a number of pressing concerns regarding their immediate situation. “I Hate Rock’n’Roll” captured The Jesus And Mary Chain at breaking point, jaded with the record industry, their own place within it and with one another. “I hate rock’n’roll,” sang William caustically. “I hate it ’cause it fucks with my soul.” This was 1998, 14 years after the band’s uncompromising debut single, “Upside Down”. The hullabaloo of those early years – the riots, the hair, Psychocandy – had steadily given way to something that, by the late ’90s, looked awfully like a regular career. Even the Reids’ infernal squabbling had been upstaged by the Gallaghers. Dispirited, The Jesus And Mary Chain broke up three months after Munki was released.

Happily, Jim and William Reid have exhibited a less vitriolic attitude both towards themselves and to their muse since they first reunited in April 2007 for the Coachella festival. Although that doesn’t mean that, on their first studio album in 19 years, the Reids don’t allow themselves a sly dig at their famously combustible relationship. “I hate my brother and he hates me/That’s the way it’s supposed to be,” sings Jim on “Facing Up To The Facts”. The pair have cut down on the craziness but fortunately not, it seems, on the noise. If anything, Damage And Joy underscores the Mary Chain’s key strengths. As the album’s opener “Amputation” attests, bold guitar riffs and the pneumatic whirr of drum machines are the order of the day. Familiar JAMC tropes including JFK, America, death and broken hearts recur – in the case of “Presedici (Et Chapaquiditch)”, all within the same song. The Mary Chain have never been shy of recycling a good idea and on at least three occasions here they plunder their own back catalogue. The snaking, low-slung bass of “Sidewalking” resurfaces on “Facing Up To The Facts” while the uncharacteristically warm duet with Isobel Campbell on “Song For A Secret” shares its vocal melody with “Sometimes Always”, the Stoned And Dethroned duet with Hope Sandoval. The “I hate my brother…” lyric from “Facing Up To The Facts” is, it turns out, actually cannibalised from a line in “Kill Surf City”.

It comes as little surprise, then, to learn that a number of the songs on Damage And Joy are entangled with the brothers’ various post-Mary Chain projects. “Two Of Us”, “Facing Up To The Facts”, “Amputation” and “Song For A Secret” date from Jim’s solo career or with his band, Freeheat. William’s “Can’t Stop The Rock”, meanwhile, was originally recorded by Sister Vanilla – aka the youngest Reid sibling, Linda. Of the bespoke Mary Chain material, the oldest cut here is “All Things Must Pass” from 2008. It offers a satisfying mix of chronically anxious lyrics (“Each day I wake/It’s gonna be my last”) and swirling, psychedelic lead guitar lines. Listening to Damage And Joy, it’s impressive how consistently the Reids have stuck to their established blueprint. The dark and lusty riff on “Amputation” could come from the Automatic era, meanwhile the lyrics of “Simian Split” (“I killed Kurt Cobain/I put the shot right through his brain”) are as cheerfully contentious as “I wanna die just like Jesus Christ/I wanna die on a bed of spikes” from “Reverence”.

The album is largely the work of the Reids themselves, joined by producer Youth on bass and, on some of the tracks, touring drummer Brian Young; Phil King, their live bassist and guitarist, appears on “Black And Blues”. More central to the plot, though, are the four duets spread across the album that showcase the Reids’ affinity for hook-laden melodies. “Always Sad” – featuring William’s partner Bernadette Denning – fuses Phil Spector pop with the Ramones’ three-chord rock’n’roll. Isobel Campbell appears twice, on the dappled “Song For A Secret” and “The Two Of Us” – the latter bringing the two-note organ riff from the Modern Lovers’ “Roadrunner” to the party. The best, though, is “Black And Blues” with Sky Ferreira, which finds Jim’s hopelessly heartbroken narrator literally offering up a piece of himself to his girl: “I don’t have nothing to give/But if I could I’d give my heartbeat”. The pair head off into the sunset accompanied by a sunny chorus of “pah-pah-pahs”, highlighting a peculiarly romantic streak that has always been evident within the Mary Chain’s music – “Some Candy Talking”, “Happy When It Rains”, “Almost Gold” – but largely gets overshadowed by the band’s reputation for confrontation.

19 years after “I Hate Rock’n’Roll”, The Jesus And Mary Chain close Damage And Joy with “Can’t Stop The Rock”, a song which celebrates the ineffable qualities of amplified guitar-driven music. “Share your imagination and your deep dark inspiration/Wrap the whole thing up in wonder,” Jim and his sister sing over loose, rolling grooves while William delivers a circular guitar motif that wouldn’t sound out of place on The Velvet Underground’s Loaded. Even for a band as famously misanthropic as The Jesus And Mary Chain, it seems a happy ending is possible, after all.

Q&A
Jim Reid
How was it being back in the studio with William?
I was pretty nervous about it. I wasn’t sure about how it was going to go down. The last time me and William tried to get into the studio, it got quite ugly and quite brutal. In many ways, that was the reason we got a producer – it wasn’t to produce the record, it was more to be a referee for when the violence kicked off. But as it turns out it didn’t get that bad. Strangely enough, we’ve seemed to mellow down in that respect. We weren’t really trying to kill each other for a change. We were actually making each other cups of tea. It was quite civilized.

A number of the songs originated from other projects. What made you want to re-record them for Damage And Joy?
Some of those records came out at a time when we weren’t completely with it or they sounded like demos or came out on Mickey Mouse record labels. Nobody bought them, basically, and it just seemed like a waste to let them go that way. So we wanted to give them the Mary Chain treatment and include them on a Jesus And Mary Chain record.

Damage And Joy – is that meant to signify anything?
My brother came up with the idea. It’s the literal translation of schadenfreude. Damage and joy seems to sum up The Jesus And Mary Chain pretty nicely, I think.
INTERVIEW: MICHAEL BONNER